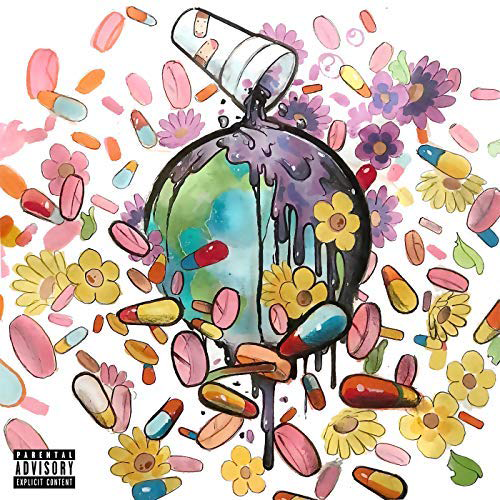 Future and Juice WRLD’s collaborative mixtape “WRLD on Drugs” sees the Atlanta rap icon Future take a backseat to the up-and-coming Juice WRLD, but lyrical immaturity and a lack of chemistry doom their collaboration.

2018 has been a relatively quiet year for the typically prolific Future, one of rap’s true superstars. Dropping only the uninspiring mixtape “Beast Mode 2” and an eclectic feature on “King’s Dead,” where he squeaked in an odd falsetto, Future surprised fans with the sudden release of this mixtape. “WRLD on Drugs” is Future’s third collaborative project in the last four years, following previous collaborations with Drake in 2015 and Young Thug in 2017.

In contrast, the Chicago-based Juice WRLD is one of 2018’s breakout stars. With smash hit singles “Lucid Dreams” and “All Girls are the Same,” and collaborations with Lil Uzi Vert and Travis Scott, the 19-year-old emo rap crooner has created a niche for himself in the music industry.

2018 has also seen many artists turn away from the glorification of drug use. After the passing of Lil Peep in November 2017 from a Xanax overdose, rappers Lil Pump and Smokepurpp declared that they were ditching Xanax. J. Cole’s 2018 album “KOD” also examines the trappings of fame in the rap industry and their potential path to drug abuse.

Despite the turning tide in hip-hop, “WRLD on Drugs” glorifies drug use to an extreme extent. Each track on the mixtape contains several references to drug use or drug dealing, ranging from prescription drugs like Oxycodone and Xanax, to illegal drugs like ecstasy and codeine. Future and Juice WRLD have each rapped extensively about their respective drug use in the past, so seeing it referenced in every aspect of the mixtape is hardly a surprise.

Moving past its narcotic-themed subject matter, the LP is mainly a series of misses that sound incredibly similar to one another. Executively produced by Wheezy, known for his work with Young Thug and Lil Baby, the project is saturated with soulless trap production perfectly crafted for repetitive hooks and mindless lyrics.

The objectifying lead single, “Fine China,” sees an unusually animated performance from Juice WRLD rapping about his girlfriend being “like a thousand-dollar plate.” Juice WRLD outshines Future on this track, who seems content to play second fiddle to an artist still establishing himself in the industry.

Yet, Future does not let newcomer Juice WRLD completely dominate him. Three tracks, two of which contain the most significant guest appearances on the entire project, do not feature Juice WRLD at all. “Oxy,” featuring Lil Wayne, and “Transformer,” featuring Nicki Minaj, are both solid tracks that are significantly improved by their respective features. The fact that Juice WRLD doesn’t appear on either of these tracks proves he is not yet on their level of rap superstardom.

The lyrical immaturities that have plagued Juice WRLD throughout his career may be why more established artists are hesitant to collaborate with him, and “Fine China” is a prime example.

Bars like, “Her last man was a p—–y, had a vagina,” are cringe-inducing, sexist and almost force the listener to turn off the track entirely. Other types of lyrical shortcomings reappear throughout the entire project, namely on the track “No Issue” where Juice WRLD croons, “She wanna kick it, she knows judo.” With only a surface-level pun and no lyrical acrobatics, the punchline falls flat.

Collaborative mixtapes can be made or ruined by the chemistry between the artists. Future and Juice WRLD, having never collaborated on any track before this album, show little to no chemistry on this tape, dooming it from the beginning. The mixtape seems divided between the respective artists, almost as if the artists were not in the room together when the album was being recorded.

Despite its flaws, the mixtape does deliver some solid tracks. “Realer N Realer” features the artists playing off each other in ways that no other track on the album does and even sees Juice WRLD pay tribute to his recently-deceased friend XXXTentacion. “Oxy” is incredibly high-energy and features a stellar Lil Wayne verse, although Future does choose to revive his screeching falsetto delivery from “King’s Dead,” which can make the song painful at times.

These few highlights aren’t enough to save the mixtape. Future sounds sleepy and bored when paired with Juice WRLD, whose cringe-inducing lyrical moments make the project a difficult listen. The overlong track listing hides pockets of enjoyment, but “Wrld on Drugs” largely fails to capitalize on the talent of either artist.