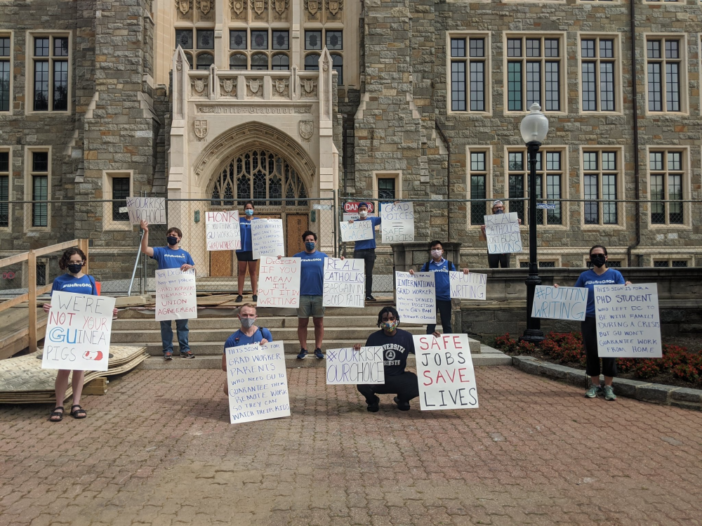 To Marya Hannun, an eighth-year Islamic studies doctoral student, the lack of institutional support for graduate students at Georgetown University became clear when she found out her mother had been diagnosed with cancer.

“I found out that my mom had been diagnosed with this very aggressive recurrence of her lung cancer to her spine and brain, and I had to leave campus. I knew I couldn’t teach and take care of her and be there with her, and I suspected that she didn’t have much time,” Hannun said in a Zoom interview with The Hoya. “I didn’t know what to do — we didn’t have any policies for that that are really enshrined for taking care of a relative.”

The lack of policy, however, was short lived. When Hannun left campus in 2019, the Georgetown Alliance of Graduate Employees, Georgetown’s graduate student union, was in the process of negotiating a contract with the university to formalize policies around paid leave, among other things, to help workers like Hannun.

For Hannun, who served on GAGE’s bargaining committee, the entire process was eye opening. Having experienced the effects of the lack of clear policies, Hannun was shocked to see the university fight against graduate student worker protections.

“I went back and sat across from the administration, who I had been sitting across from for like a year, and we had a policy on the table for — not even paid leave for taking care of family members — but just leave for taking care of family members where you retain your health care and your standing in the program so you don’t lose funding in the future. And they just wouldn’t acknowledge that that was important,” Hannun said.

Founded in 2017, GAGE has sought to advocate for graduate student workers on campus, negotiating contracts that codify protections around health care coverage, COVID-19 and more, often going toe-to-toe with the university in the process. Through organizing and community building, GAGE has effected concrete policy changes to protect the rights and livelihoods of graduate student workers at Georgetown.

From Activism to Organizing

GAGE found its roots in the Georgetown Doctoral Students Coalition, a group of doctoral students who aim to raise awareness for inequitable working conditions for doctoral workers on Georgetown’s campus. Members of the DSC decided in 2017 to seek unionization, founding GAGE and expanding its membership to include graduate students across departments and schools, according to Hannun.

“We were really a kind of student activist group as the Doctoral Students Coalition who didn’t do much more than get people to sign petitions. We didn’t have a lot of capacity. And as GAGE, we’ve become a really formal organizing apparatus,” Hannun said.

National legislation ultimately allowed for the formation of GAGE. A landmark 2016 decision from the National Labor Relations Board, an independent government agency that enforces U.S. labor law, defined graduate workers at private universities as employees who have the right to unionize. The ruling came after the Columbia University graduate students’ union sued to change the NLRB rule.

The decision made by the NLRB created conditions that allowed GAGE to exist, according to Vice President of GAGE Daniel Solomon (SFS ’13, GRD ’23).

“I think there were a lot of important changes in the national landscape of graduate labor organizing across the United States that gave rise to the conditions that made GAGE’s formation possible,” Solomon said in a Zoom interview with The Hoya.

After the 2016 NLRB decision, GAGE approached the university in 2017 to demand recognition of the union in coordination with the American Federation of Teachers, a national teachers’ labor union, which would serve as its bargaining unit. The move to formal recognition would have allowed GAGE to negotiate with the university on behalf of all graduate student workers. Provost Robert Groves denied the request, however, arguing the move went against the university’s Just Employment Policy, which Groves claimed did not apply to graduate student workers.

To GAGE President Jewel Tomasula (GRD ’22), who joined the union in fall 2017 as it was campaigning for official recognition, the university’s refusal to voluntarily recognize GAGE’s union status was indicative of how little the university valued graduate students’ labor.

“Research in the labs doesn’t happen without the Ph.D. students’ leading projects. We’re the ones in the labs doing things first. And then my friends in the social sciences and humanities, they teach classes by themselves, so they create their own syllabi,” Tomasula said in a Zoom interview with The Hoya.

Graduate students have played and continue to play an important role on Georgetown’s campus, according to a university spokesperson.

“Georgetown University shares GAGE-AFT’s belief in the important role that graduate student assistants play and is committed to giving them a strong voice as members of our community,” the university spokesperson wrote in an email to The Hoya.

Months later in April 2018, the university changed course and allowed GAGE to move forward with a vote on unionization among graduate students. The sudden reversal came after a majority of members on the Advisory Committee on Business Practices, a group of students, professors and administrators who advise the university on workplace issues at Georgetown, resigned from their positions in protest of the university’s refusal to recognize GAGE.

In allowing GAGE to vote on unionization, Hannun said Georgetown created a model for other graduate student unions at other colleges and universities in the United States to follow.

“There was an aversion or reluctance to getting the NLRB to litigate these cases, and so the fact that Georgetown agreed to a private agreement and circumvented the NLRB was a model that other universities followed,” Hannun said.

Toe-to-Toe With the University

GAGE started negotiations with the university in January 2019 over a contract between the two parties. GAGE ultimately reached an agreement with the university May 1, 2020, which provided health protections like dental insurance and codified pay raises for graduate students, after months of stalled bargaining and protests. However, GAGE has continued to use its power to negotiate with the university to expand benefits amid the COVID-19 pandemic.

GAGE’s contract outlined policy regarding medical leave, pay protections and more, according to a university spokesperson.

“Our groundbreaking collective bargaining agreement (CBA), ratified in May 2020 in the midst of the COVID-19 pandemic, includes carefully negotiated provisions around medical leave, as well as other issues brought forth by GAGE-AFT. We responded to and consulted with GAGE-AFT and adjusted policies on student employment from abroad, service flexibility, public health protections, medical leave, and ongoing consultations regarding COVID-19 planning. ” the spokesperson wrote in an email to The Hoya.

With the collective power of the union, GAGE members returned to the bargaining table to address COVID-19 safety measures for graduate workers in July 2020, just months after finalizing its first contract.

Though the university initially held bargaining sessions, or meetings between university and GAGE representatives, about adding COVID-19 provisions, the administration reversed course in September 2020, stating health measures had already been discussed during negotiation of GAGE’s initial contract.

During the course of arbitration, both GAGE and the university agreed to an expedited process, submitting only documents as evidence to a third-party arbitrator that would later make a binding decision for both parties. The arbitration process was intimidating for many GAGE members who had no legal background or representatives helping them, according to Ari Janoff (GRD ’24), the grievance officer of GAGE.

“Working with the arbitrator was a totally new experience for a lot of us. Many of us had never done anything like that before. It involves a lot of legal briefs that none of us had ever written or scheduling evidentiary hearings, where we talk about what counts as a fact,” Janoff said in a Zoom interview with The Hoya. “We all had to learn as we went, whereas Georgetown has a lawyer that’s a known anti-union labor lawyer that’s done this for years.”

Ultimately, the independent arbitrator ruled the university had violated its contract with GAGE, and as a result, in January, GAGE requested to reenter bargaining with the university to formulate a written agreement on COVID-19 safety measures for graduate workers.

The arbitrator’s decision reaffirmed the university’s right to issue COVID-19 policies and its commitment to bargaining with GAGE in good faith, according to a university spokesperson.

The arbitration process has empowered graduate students to fight for COVID-related protections, and the discussions have been smooth since the bargaining process resumed, according to Tomasula.

“We’re hoping that resolves pretty soon, and I think the discussions there have been pretty productive, now that we had the arbitrator come in and say that we do have the right to discuss this,” Tomasula said.

A Future in Solidarity

Even as GAGE progresses on contracts and workers’ protections, it continues to expand its advocacy to include as many graduate workers as possible on Georgetown’s campus. GAGE has made graduate work more accessible to more Georgetown students from varied socioeconomic backgrounds, for example, and it has emphasized the importance of graduate students’ contributions to their fields, according to Jacobs.

“When we are paid so little that it becomes exclusionary for a lot of people who can’t afford to live on a sub-living wage, then everybody loses. And it’s a way for us to demand the respect that we deserve as professionals in our field,” Jacobs said. “I think that I deserve recognition as somebody who’s contributing to my field — not just as a student taking something from the system, but also adding something.”

Currently, GAGE is primarily focused on its ongoing negotiations with the university, as well as widening its membership to include more master’s and international students, Jacobs said.

“International students are bound by visa restrictions — they cannot work outside of the campus without some kind of legal authorization, so they are especially vulnerable in different aspects,” Tsoi said in a Zoom interview with The Hoya.

Beyond its current advocacy for COVID-19 protections, GAGE has also moved to stand in solidarity on social media with other movements related to graduate students at Georgetown, including Tuition Equality Now, a movement demanding graduate students receive an equitable tuition discount compared to undergraduate students, and the campaign against Redeploy Georgetown, which calls on the university to end mandatory reassignments for Georgetown workers to on-campus positions, regardless of if they are willing to take the safety risk, according to Nicole Dan (GRD ’21).

“I think what is really beautiful about GAGE is the way that we are able to be in solidarity with other causes,” Dan said in a Zoom interview with The Hoya. “I think it’s very easy for the university to pit us against each other — it’s very easy to say, ‘Oh, grad students, you can have what you want at the expense of the undergrads,’ — but I do think that it’s possible for all of us to get an equitable sort of experience at Georgetown.”

Through continued grassroots organization, Solomon hopes GAGE can continue to make a difference in the lives of graduate student workers and effect real change on Georgetown’s campus.

“The most important lesson is that organizing works, that if you are able to bring together a group of people and work with them on a constant and steady basis to try to identify common ground in their material conditions, that has a real sort of possibility of transforming policy and in transforming aspects of Georgetown life,” Solomon said.