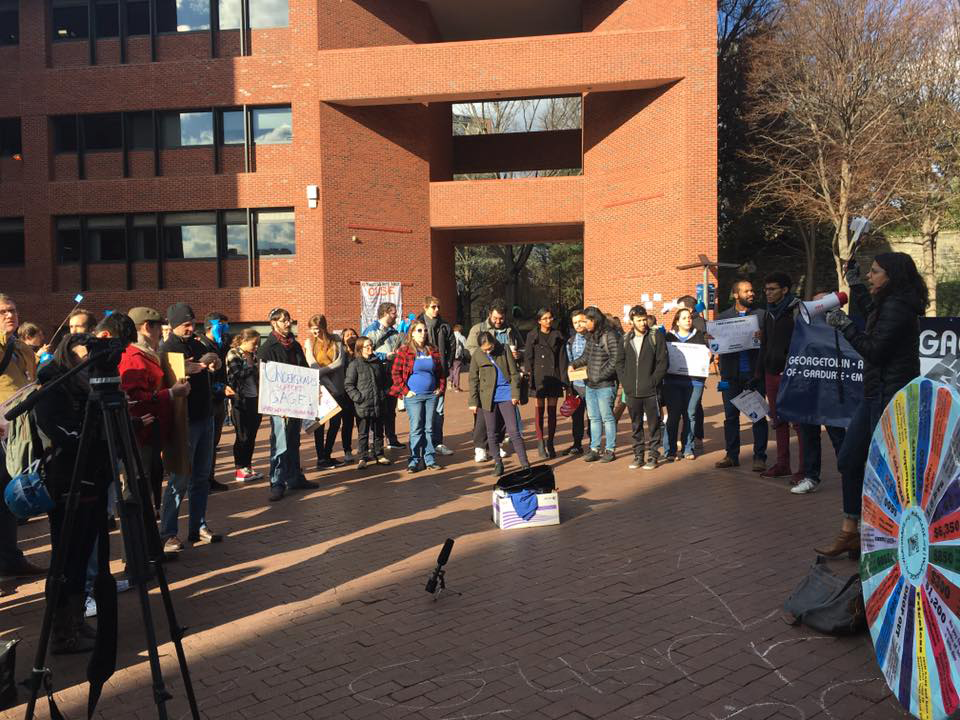 The Georgetown Alliance of Graduate Employees announced its intention to file for an election with the American Arbitration Association on Oct. 8, beginning the process to hold a union election for graduate student teachers and research assistants this fall.

The election will ask eligible graduate students to vote by secret ballot on whether they wish to unionize. If the majority votes in favor of unionization, GAGE will be able to negotiate on behalf of all graduate student assistants.

This development comes after a two-year effort by GAGE for university recognition of a graduate teaching assistant labor union. GAGE reached an agreement with the university to hold an election April 2.

Deidre Nelms, a teaching associate and fourth year doctoral candidate in the department of philosophy, believes forming a union will give graduate students greater bargaining power.

“Organizing is a way to connect workers and teachers across departments and make it easier for us to support each other,” Nelms wrote in an email to The Hoya. “When hundreds of us are united in a recognized union, we’ll be able to bargain with the university for an improved, stable contract.”

Douglas McRae, a graduate worker and fifth year doctoral candidate in the department of history, said unionizing would have a positive influence on the quality of life for graduate workers across Georgetown’s programs.

“Collective bargaining has allowed graduate workers to achieve better compensation and working conditions, as well as gains in areas, such as healthcare and childcare,” McRae wrote in an email to The Hoya. “We’ve seen the benefits of unionization at places like NYU, as well as public universities like UConn, Michigan, and Illinois.”

The Georgetown Solidarity Committee, an organization dedicated to workers’ rights and social justice issues on campus, stands in solidarity with GAGE as they move towards an election.

“Graduate employee’s working conditions are our learning conditions,” a spokesperson for GSC wrote in an email to The Hoya. “Graduate workers deserve to see a doctor, pay their rent, and have a say in their employment without jeopardizing their savings, their research, or our classes.”

Under the regulations of the National Labor Relations Board, graduate student teaching assistants are considered university employees. However, this is under an August 2016 ruling which could be challenged in the future. A third-party organization administering the election helps ensure the result in case the ruling is ever reversed. The election is set to be administered privately by the AAA, a neutral third-party organization, outside the scope of the NLRB, to ensure Georgetown University cannot legally challenge the election’s outcome.

The university will stand by the decision of the graduate students, Provost Robert Groves and Executive Vice President for Health Sciences Edward Healton said.

“We will work together to ensure a free and fair election that encourages dialogue and gives eligible graduate student assistants the opportunity to decide if they would like to be represented by a union,” Groves and Healton said in a joint statement released to the university.

If the election has an affirmative result, GAGE’s next steps will be collective bargaining for and signing a contract intended to benefit graduate employees.

GAGE shared a priorities survey with its members for graduate workers to list what it would like to see in a new contract and what they think would improve their experiences working at Georgetown.

“Our ultimate goal is to negotiate the best possible contract for graduate workers at Georgetown,” GAGE wrote in a statement on its website. “One that truly values our contributions to the university as teachers, researchers, and graduate assistants.”

This article has been updated at 6:36 p.m. on Oct. 25 to reflect the National Labor Relations Board’s classification of graduate student employees.