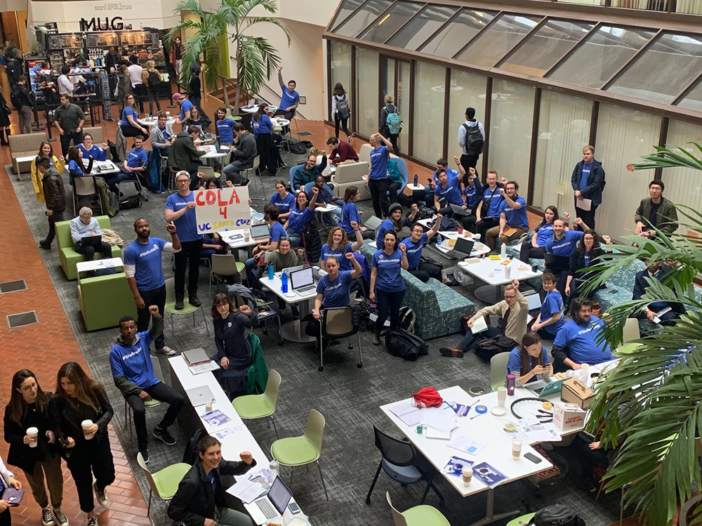 The Georgetown Alliance of Graduate Employees assembled in the Intercultural Center Galleria with signs reading “Hey Admin it’s been a year!” and “Fair contract now” to fight for an improved contract.

With specific goals in mind, GAGE members are guided by their motto “THRIVE,” which embraces graduate student well-being, Canfield said.

“I think a good way to frame it is around the motto of our bargaining from GAGE’s side. That motto is “THRIVE”: transparency, health, remuneration, inclusivity, vitality and equity,” Canfield said in an interview with The Hoya. “Being guided by that idea of THRIVE, in those six letters, was the big overarching goal.”

The union was established following a student election in November 2018 after graduate student frustration grew as the university primarily viewed the graduate student employees in their positions as students before workers. GAGE elected 14 members to the bargaining committee in February 2019 who have worked since March 12, 2019, to negotiate with the administration for a fair contract.

After entering negotiations in January 2019 that established weekly bargaining meeting sessions with the aim of finalizing its first union contract, GAGE’s demonstration this week represented an extended effort toward reaching an agreement.

GAGE, along with the American Federation of Teachers, has negotiated with the university through proposals focused on working conditions since the union was established in late 2018. The group plans to move forward with proposals that have a direct economic impact on the university, according to a university spokesperson.

“Since the election results were certified, Georgetown and GAGE/AFT began the collective bargaining process and have reached tentative agreements on more than twenty subjects, including management rights, union rights, grievance and arbitration procedures, and procedures to address claims of discrimination and harassment,” a university spokesperson wrote in an email to The Hoya.

GAGE hopes to reach its contract through collaboration to benefit both graduate workers and the university, acknowledging the likelihood of future trade-offs and compromises, according to Canfield.

“We think that inherent in that relationship is that it’s mutually beneficial for graduate workers to have a contract that really curates to that Georgetown ideal of the whole person,” Canfield said.

The university values the strong voice of graduate student employees in the Georgetown community and hopes to reach a collective bargaining agreement by the end of the spring semester, according to the university spokesperson.

“Georgetown is committed to continuing to negotiate in good faith and would like to reach a collective bargaining agreement by the end of this spring semester,” the university spokesperson wrote in an email to The Hoya.

Although the Organizing Committee continues to seek improved working conditions, the committee and the university made progress during the beginning of the semester toward more economic improvements like wage raises and benefits, including health care for personal, medical and family leave, as well as implementing mechanisms of accountability, according to Canfield.

Though GAGE does not expect to have all its requests granted as part of the negotiations, the union will continue its efforts through active work with the university, according to Canfield.

“While we understand that nothing is going to be ideal and there will have to be trade-offs or compromises, the language that we’re really trying to look at this with is a sense of collaboration, where we’re not competing with the university to get this contract — we’re trying to work with them to have a contract that benefits both all of the graduate workers and the university,” Canfield said.