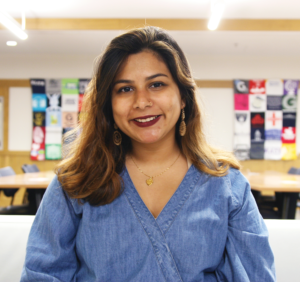 I thought shooting stars were a myth. They may be astronomically proven, and relentlessly depicted in popular culture, but one had never streaked across my eye. This skepticism held true until I was laying on the grass at midnight at the Calcagnini Contemplative Center in the middle of last April. I was awarded the coveted magic of two shooting stars. I do not know if my wishes counted — it took a second for my shock to wear off to formulate the hopes I wanted to send to the universe. I realized shooting stars are real. I had just never taken the time to stop, look and wait for them to find me.

I am so used to writing about what I love about others; maybe it is the Leo in me, but fierce loyalty is etched into my personhood. In short, those people that are in my heart are protected by unwavering friendship and hands to always lift them up. I am so used to showing up for people and things, for work, class, coffee and comfort — compilations of colorful scheduled blocks within my Google calendar. Funneling my energy into obligations towards others is easy. Showing up for myself is not.

I have spent college thinking that if I were not working so hard to the point where I could fall asleep getting my haircut, then I was not working hard enough. If an opportunity presented itself to me, I would take it, regardless of my limited bandwidth. Part of why I have worked this way is because I am me. I am a Bangladeshi girl who immigrated to this country when I was four. I was determined to say yes to as many things as I could because I never wanted to miss out on the opportunities my parents worked so hard for me to have. My privilege of growing up in a way that afforded me a Georgetown education does not escape me. That Georgetown education comes with stress, pressure and sometimes warped views on what it means to be successful.

I have come to realize that never wanting to miss out made me miss out on a lot of life. It took me until the end of my junior year to find the time to stare at the sky until I saw shooting stars. Maybe I had not seen one before not because they are in any way extremely rare or unreal, but because I had only been glancing and I had never been watching.

Another reason for my constant stream of “yes” is that my Georgetown career was shorter than most — I am a sophomore in a senior’s body, having transferred here from Northeastern University in the fall of my junior year. I felt like I was catching up and that I had to make up for the lost time. Admittedly, the transition was not supposed to be an easy one, pulling my roots from the comfortable Boston soil and attempting to replant them in the Washington, D.C. earth that seemed hard and impenetrable. Loneliness hung heavy over me and regret of leaving my community in Boston stayed seated in the back of my head as I attempted to navigate new surroundings and social structures.

There is no sugarcoating it under poetic language — it really, really sucked, and I was really, really sad. There was no magical shift in this story; there was no one moment that changed the lens through which I saw college and, more specifically, Georgetown. There was no wand waved over my head bringing contentment as it drained the anxiety from my body. I was walking up a hill, legs burning, trying to keep the momentum going because I knew if I stopped, I might not start again. There was no time to watch the stars.

There is always going to be something else — something bigger, better, more prestigious, more impressive, more something. I was so tired from my trek up the hill that I had little time or mental capacity to think about how I wanted to be living. But as I neared the end of my undergraduate journey, I was compelled to reflect more intentionally on the guilt I felt for not being able to do everything. I realized that living anxiously in the moment is not living. I decided halfway through the second semester of my senior year to start choosing fun. I stopped letting unnecessary guilt slip in the joyous moments spent with people I cared about. I did not let it disrupt the peaceful scenes spent with myself and a palette of glitter watercolors. I chose fun and I chose to show up for myself.

Again, this shift is not a conclusive change wrapped up in a bow in time for the ceremonial stage-crossing at graduation, but rather a daily act of self-care that goes beyond Netflix and facemasks — though I enjoy both of those things very much. I learned that self-care is not always simple and fun. Pursuing it can be tough because sometimes it is easier not to think about how your mindset needs to shift. It costs a substantial amount of energy and emotional capacity but pays off with further clarity. I am still walking up the hill, but I think I am beginning to enjoy the view.

Mayeesha Galiba is a senior in the College.