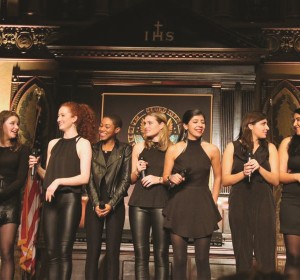 The most anticipated a cappella event of the semester returns this year with an eclectic lineup. The 26th iteration of D.C. A Cappella Festival, hosted annually by the Georgetown Phantoms and the Georgetown GraceNotes, kicked off last weekend with an array of performances by Georgetown University’s resident a cappella talent and guest performers.

Started in 1990 by the Phantoms and the GraceNotes, the event spans two weekends and demonstrates the rich a cappella tradition at Georgetown and other universities. In addition to performances by the two host groups, Resonant Essence Live, the Beelzebubs, the Saxatones and the Chimes will be performing everything from pop hits to hip-hop to television theme songs.

This year’s guests are the Beelzebubs, an all-male a cappella group from Tufts University.

On Saturday, Nov. 5, the GraceNotes ushered in the 26th festival with nods to Christina Aguilera and Fergie. Their performance was followed by the Phantoms, who pulled off lively renditions of Stevie Wonder’s “I Wish” and Katy Perry’s “Rise” among other pieces.

The Beelzebubs sang with palpable confidence, energizing the crowd with creative takes on Peter Schilling’s “Major Tom” and the Pokémon theme song. Their performance was also marked by an impressive, theatrical choreography.

Following the intermission, the Saxatones’, Chimes’ and GraceNotes’ performances made up the second half of the festival. The Saxatones performed a unique take of Chance the Rapper’s “Finish Line/Drown,” among other measured pieces. As one of only a few coed groups that performed Saturday, the Saxatones’ chemistry and coordination were on full display during the entirety of their performance.

The final portion of the show saw another performance by the GraceNotes, who gave a performance of Al Green’s “Let’s Stay Together.”

The talent on display Saturday night promises an equally fulfilling second act next weekend with performances by the Gracenotes, Superfood, the New York University N’Harmonics, the Johns Hopkins University Octopodes, the Capitol G’s and the Phantoms.