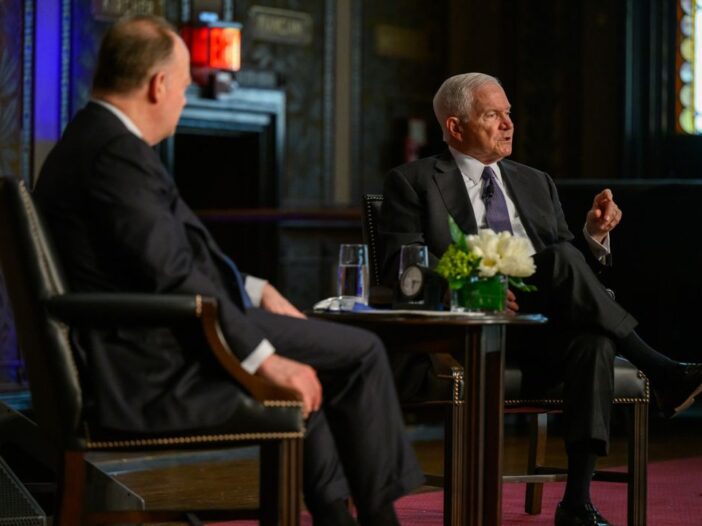 The event, which featured a discussion between Gates and Georgetown University president John J. DeGioia (CAS ’79, GRD ’95), took place in Gaston Hall as part of this year’s Tanous Family Endowed Lecture. Gates spoke on the prospects for the future of Russia’s invasion on Ukraine, Putin’s motivations in the crisis and the effects on the lives of Americans.

Gates is the only Secretary of Defense to have remained in office under two presidents, serving under former Presidents George W. Bush and Barack Obama. Gates previously served as the director of the Central Intelligence Agency from 1991 to 1993. Prior to his work in government, Gates received his Ph.D. in Russian and Soviet history from Georgetown.

Gates said Putin’s motivations are rooted in an obsession with rebuilding the Russian Empire.

“Putin has become obsessed,” Gates said at the event. “This has nothing to do with trying to recreate the Soviet Union. This is about recreating the Russian Empire, and specifically the Slavic core: Russia, Belarus, and Ukraine. He believes that these are all one people and they all belong to one entity.”

Much of Putin’s motivation in the Ukrainian invasion comes as a result of Putin’s Russian imperialist belief that Russia and Ukraine are one country, bound by a shared origin. Putin believes that the only way for Russia to become itself is through the annihilation of Ukraine, denying Ukraine’s independent history and national identity.

Gates said that Putin views Ukraine as a way to regain Russian supremacy in Eastern Europe, a frightening reminder of the strength of authoritarianism at this time.

“In a way, he has reached back to the mid-19th century from Russia,” Gates said. “We thought in the early ’90s, democracy would prevail, that democracy has become stronger than authoritarian governments, but clearly we had just convinced ourselves of that.”

In opposition of Putin’s nationalist determination, Gates said American politicians have united to sanction Russia, which may provide a glimpse into further cooperation between opposing political parties.

“Putin has accomplished what no living being has accomplished, bringing the Democrats and Republicans together,” Gates said. “Truth is from left to right, you have really strong bipartisan support for the United States in doing what’s best, and maybe I’m just a bit optimistic — but this may lead to broader bipartisan cooperation on other issues of national security.”

Lawmakers from across the aisle have shown support for Ukraine both Republican and Democrats pushing to provide more military assistance to the country.

According to Gates, the U.S. government’s ability to unite global leaders in retaliation against Russia and support Ukrainian President Volodymyr Zelenskyy has shown the strength of international institutions.

“I think they’ve done a really good job, with the way they get the NATO coalition to unite and deliver these severe sanctions is an extraordinary thing,” Gates said.

Gates also said the invasion of Ukraine will have negative effects on the U.S economy, including on the price of food.

“Guess what? Ukraine and Russia produce 30% of the grains, corn, barley and wheat in the world, so if the price goes way up in the rest of the world — it’s going to go up in the United States,” Gates said. “It’s important that our leaders are helping Americans understand what we’re doing on the global stage and why it matters for our economy.”

The ongoing war in Ukraine has led to a strain on global wheat supplies causing a spike in the global prices of goods such as cereal and bread that rely on Easteran European grain exports. This has also caused the prices of food in the U.S. to rise.

According to Gates, Putin has further ambitions of capturing more autonomous land in Eastern Europe and it is imperative that leaders fight against Putin’s attempted annexations.