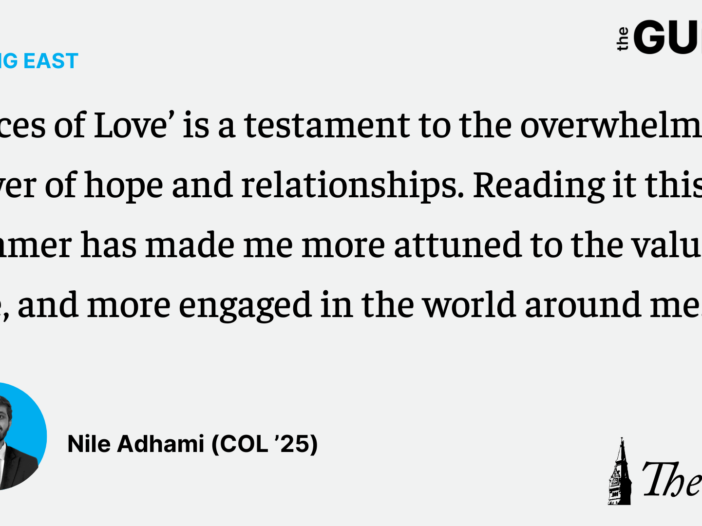 Iran is a deeply misunderstood country. Frequently, we in the United States are bombarded with news about its repressive and extremist government — but rarely do we actually engage with the country’s rich history.

This past year, to help unpack the fascinating cultural legacy of Iran, I took language coursework in Persian. Also known as Farsi, Persian has largely retained the same lingual features, meaning and structure of written work as far back as the 13th century. Learning the language has unlocked for me the incredible world of Persian literature, introducing me to facets of Iranian culture and identity unseen on both television screens and in Middle East classes at Georgetown.

It is difficult to describe the importance of poetry to Iranians. Comparing the role of poetry in Iran to its role in the West reveals deep ties to Persian identity. For example, the most important Persian poet, Hafez, is not to Iranians what Shakespeare is to the British. Unless a collection of Shakespeare can be found in every home, his lines memorized in reams by everyone and his works used by the masses for divination, luck and spirituality, Shakespeare can never be compared to Hafez.

Perhaps a comparison to religion is more apt: Poetry is to Iranians what religion is to the religious. But this analogy is a bit off — not just because many Iranians are religious — but also because for many in Iran, poetry is an inextricable part of Islam, or at least the Islam of Sufi mystics like Rumi. The ghazal, the poetic form of choice for Persian poets, is steeped in the love of God and His creations.

In this backdrop exists “Faces of Love,” translated by Dick Davis, perhaps the most authentic and skilled English language translator of Persian poetry. Davis, a poet in his own right, worked in Iran for eight years and received a Ph.D. in medieval Persian literature. By contrast, Daniel Ladinsky, who wrote the best-selling English translation of Hafez’s poetry, did not even know Persian. Neither did Coleman Barks, whose translations of Rumi are responsible for the ancient Persian poet’s popularity in the United States. As a result, most Persian poetry that exists in English translation is, to put it mildly, incorrect. Thankfully, Davis’ “Faces of Love” is true and faithful to the original texts.

Davis’ book is an excellent compendium of the works of three great Persian poets, starting with Hafez, the standard bearer for poetry in Iran. Every aspect of Persian culture is influenced by the work of Hafez, from the proverbs used in common parlance, to Persian classical music and even film and television. His poetry explores the mystical, the divine and the sublime, emphasizing the ecstasy of love and devotion. The book then features two other poets from Hafez’s home city of Shiraz: Obayd-e Zakani and Jahan Malek Khatun. Obayd-e Zakani was a satirist, fond of attacking what he viewed as religious hypocrisy. Jahan Khatun was the female niece of the liberal and popular ruler Abu Ishaq, whose work largely existed in obscurity until much of it was published for the first time in 1995. Her poems deal with love and unhappiness, considering how happiness is lost.

Each of these three poets began, in successive regimes, as darlings of court society before becoming enemies of the state. They were for years patronized by the ruler of Shiraz, Abu Ishaq, before being forced into exile when he was deposed by the despised religious conservative Mubaraz al-Din. Thankfully, only five years later, Mubaraz was deposed by his own son, who returned the city to a popular, liberal Islamic rule.

Fundamentally, what I love about this book is its authenticity. Dick Davis is, unlike the other Western translators of Persian poetry I mentioned, truly qualified to translate from Farsi to English. The other aspect of this book I love is its ability to retain poetic form even in translation. As a poet himself, Davis is able to translate in a way that is appealing and poetic, even in English. Take these lines: “That Busybody criticizes me / For loving love and revelry / but it’s my knowledge of the hidden world / that motivates his enmity.” Although undoubtedly more compelling in the original Farsi, the lines retain aesthetic appeal even in translation.

Reading this book, you will encounter — in translation — what Iranians hold dear to their hearts and souls. You will see a window into the culture of Iranian identity, which is essential to understanding the country and its history.

The poetry translated in “Faces of Love” is a testament to the overwhelming power of hope and relationships. Reading it this summer has made me more attuned to the value of love, and more engaged in the world around me. I hope you check it out and immerse yourself into the incredible world of Persian literature.

Nile Adhami is a rising sophomore in the College. Gazing East will appear online every other week during the summer.