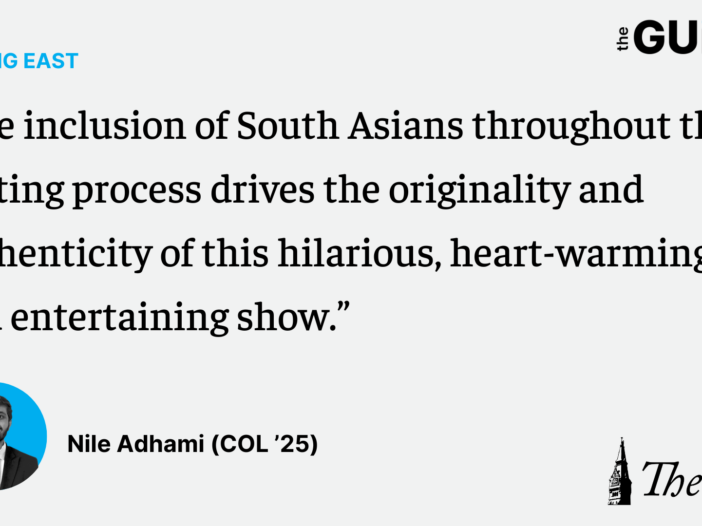 The first few moments of Disney’s “Ms. Marvel” had me overcome with emotion. For perhaps the first time I can remember in American film or television, I saw my living room and heard the very same conversations I had growing up in a Pakistani American household.

Early in the first episode, Kamala Khan (Iman Vellani), the teenager soon to become Ms. Marvel, is told by her older brother to say “Bismillah” before she begins her driving test later that day. It instantly stood out to me: it’s a relatively small detail, yet so crucial to getting the portrayal of Muslim Americans on screen right.

I cannot remember hearing that word uttered in an American film, despite its centrality and overwhelming importance to Islam — the world’s second largest religion. Its meaning is “in the name of God, the most merciful, most kind,” and is spoken before a Muslim does pretty much anything, from taking a sip of water to beginning any one of the five daily prayers.

That’s not to say, however, that I haven’t seen Muslims represented on screen — they just haven’t been represented accurately. Too often, Muslims are portrayed as radical extremists who the vast majority of the world’s Muslims would not even recognize as following Islam. Moreover, Muslims in American films are almost always Middle Eastern in origin, despite making up only around a fifth of the world’s Muslims. But this show portrays Muslims who have rarely been shown on American screens: South Asians.

The superhero elements of “Ms. Marvel” draw from both South Asian and Islamic sources. Kamala’s powers come from a bangle she receives from her eccentric grandmother, which enables her to manipulate light and energy. She is able to temporarily extend her reach with a cosmically powered fist, climb energy-derived stairs, and otherwise use her powers to save those around her. As the show develops, we learn she is a jinn — an entity originating from pre-Islamic Arabian society and recognised in Islam. Another group of jinn seek to return to their home dimension through Kamala’s bangle, which would destroy the world in the process. Kamala’s task is to thwart them.

What strikes me about this show is its authenticity. It is an accurate portrayal of both Muslim and South Asian American identities, which is rare in Hollywood. The series is a significant contrast to the oftentimes cringe-inducing representations of South Asians in American film, which are often only projections of what predominantly white writers think brown people are like rather than true windows into the South Asian experience.

Ms. Marvel, on the other hand, reflects real cultural understanding, showing Kamala Khan’s household as a close-knit Pakistani immigrant family. After Kamala hilariously crashes her car into her driving instructor’s car, her parents fiercely defend her. Despite Kamala being quite clearly at fault, they blame the instructor for having her take the test “on the street with all the other cars,” and having expectations as ludicrous as “expecting her to signal at every turn.”

In another instance, when Kamala’s friend Bruno swings by the house, Kamala’s mother asks if he is staying for dinner. When he says no, she insists he take food packed to go. And when her parents initially prohibit Kamala from going to Avenger-con, they reverse their decision only on the stipulation that Kamala bring her father along — and wear matching hand-made ‘The Hulk’ shalwar-kameez, a common South Asian dress. Together, these interactions exemplify parenting tactics bound to be familiar to many South Asian viewers.

As a South Asian American myself, I closely identify with Kamala Khan and her experiences. I recognize second-generation immigrants translating American lingo into things their parents will understand: in Khan’s case, a cosplay competition becomes “historical reenactment.”

I know parents who are loving and tender, comically failing to get through to their children, as when Kamala’s abu (her father) says “beta, you’re not normal,” causing Kamala to storm out. I know the fallout, too, as when her father hastily tries to clarify that he meant she is special, or when he leaps into Kamala’s room in full Hulk regalia, with green face paint to boot.

This show has deep roots in South Asian history, too, and confronts the disastrous legacy of British imperialism. The show discusses Partition, the division of British India into India and Pakistan in 1947, at length; without spoilers, it is expertly incorporated into the plot’s more mystical elements. This part of the story is tied together by Kamala’s grandmother, who reflects on a “border marked with blood and pain,” and people “claiming their identity based on an idea that some old Englishman had when they were leaving the country.” The history she speaks of is not one frequently taught in American schools, but it is essential to understanding modern-day South Asia.

Part of the reason this show is so successful at capturing South Asian culture and identity is, quite simply, because they hired and casted South Asians. As I mentioned earlier, I have shuddered at films in which South Asian actors play parts written by white people who have little understanding of the culture.

This show, in contrast, involves South Asians in every aspect of the production process. It was created by British Pakistani writer/comedian Bisha Ali; among the producers is the Marvel comic’s original creator, Pakistani American Sana Amanat, and Iman Vellani herself is Pakistani American. Other prominent South Asian roles include Indian actor Mohan Kapur as Kamala’s father, and Indian American Azhar Usman as Najaf, a food cart vendor. The show is even directed by two South Asians, Indian American Meera Menon and Pakistani Canadian Sharmeen Chinoy.

The inclusion of South Asians throughout the writing process drives the originality and authenticity of this hilarious, heart-warming, and entertaining show. Watching this show will help you understand what it actually means to be a South Asian, Muslim American — I know, because I’ve lived it.