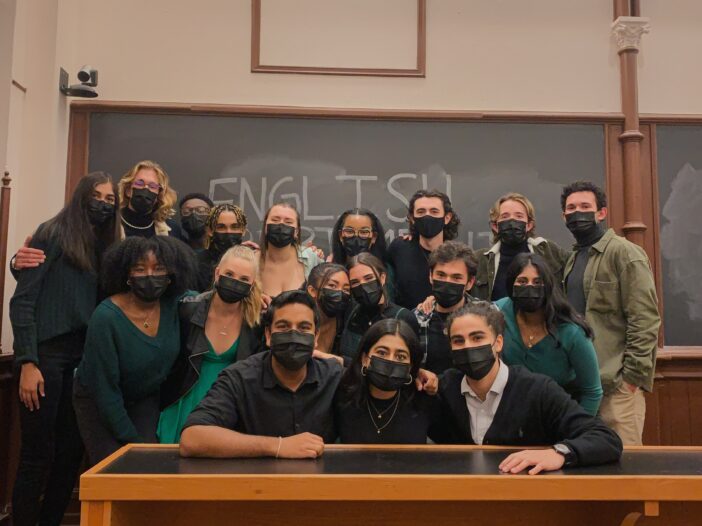 Riffing and harmonizing, Gaston Hall has often been filled with the sounds of beats and vocals, as the stage comes to life with an a cappella performance. Meaning “in choir style” in Italian, a cappella is known for lacking any instrumental backing and has long been a mainstay of Georgetown University’s campus music scene — with some groups founded as long as 75 years ago.

A group performance where members’ vocals create background harmonies for lyrical tunes, a cappella is an entertaining way for students to engage in performance based arts, whose exact style can often vary by group. Georgetown is host to its own set of distinct a cappella groups, each of which has its own history and performance style.

Differing in musical preferences, Georgetown is home to six a cappella groups: The Phantoms, The GraceNotes, Superfood, The Georgetown Saxatones, The Georgetown Chimes and The Capitol G’s. Each one has its own traditions and performance techniques.

With a cappella, the singers of each group rely on being able to hear and riff off of one another to create their pieces, but with the onset of COVID-19, many a cappella groups found it difficult to replicate their practices and performance styles in a virtual setting. However, this time away from campus proved important, as groups returned to Washington, D.C., this fall with more innovative and inclusive approaches to promoting a cappella on campus, allowing their medium to be reestablished within the campus community.

Coming back from Georgetown’s virtual year, campus a cappella groups have reimagined their operations. They are focusing their efforts on increasing accessibility through the use of online sheet music and virtual auditions, as well as promoting the racial and socioeconomic diversity of club members, all in an effort to facilitate a collaborative future for the many musical groups on campus.

Though Georgetown’s a cappella clubs are grateful to be back in person, the university’s current public health safety guidelines, like masking, have made a cappella function differently than in previous years. The Phantoms, GraceNotes and Saxatones have all implemented lessons learned from the pandemic, like using new sheet music and practice techniques, to respond to struggles that have accompanied their return to campus.

Isabelle Wisco (MSB ’22), president of the Saxatones, said the virtual academic year taught her the importance of community bonds within her performance group, and coming back to campus, engagement within her group was a priority.

“If anything, going through the virtual year made many of us more appreciative of this community that we’ve found on campus,” Wisco wrote in an email to The Hoya. “From this, we’ve put in extra effort to further strengthen the bond between our members and continue to develop.”

The return to campus for other a cappella groups has similarly offered new areas for growth in their practices, as some groups have used technology popularized during the pandemic to improve their previous rehearsal methods. Ria Pradhan (SFS ’23), a member of the GraceNotes, found that online practices last year led to the development of a more efficient way to work with their sheet music.

“One of the changes we’ve implemented over the pandemic is we started using new score and sharing our screens and learning our music that way,” Pradhan said in a Zoom interview with The Hoya. “Whereas before we literally just used to go over the sheet music and play on the piano, and now in our in person rehearsals we still use new score even though there’s no need to — just because we figured that it’s a really nice way to learn music.”

The Saxatones are also working to include all members’ voices when deciding on their music selection, according to Wisco.

“The way our music decisions are made (i.e. selecting songs for our repertoire, choosing soloists) is done democratically, where every member regardless of seniority has an equal voice,” Wisco wrote.

By implementing these new updates into their ensembles, Georgetown’s a cappella groups are taking lessons learned from last year in order to help facilitate their returns to campus.

Coming back from Georgetown’s virtual programming last year, a cappella groups on campus have used the transition to in-person operations as an opportunity to further bolster inclusion efforts within their organizations after reflecting upon how they could change certain practices that have traditionally been in place.

This semester, the GraceNotes developed resources for applicants who may not come to campus with extensive musical training in an effort to be inclusive of students who did not have access to music classes before Georgetown. The group has introduced coffee chats with current leadership, weaving together the new members since this summer and hosting workshops for students who did not have previous musical training who want to audition, according to Pradhan, who witnessed these changes.

The Saxatones have put parameters in place with their recruiting process to further support prospective members, according to Wisco, including disregarding applicants’ musical backgrounds to promote socioeconomic diversity within the club.

“This means someone that has been classically trained all their life and someone that has never sung before both have an equal shot of getting into the Saxatones,” Wisco wrote. “In our current group, we have members who cannot read music, members who have never been in a singing group before, etc. I find this essential for fostering diversity as many communities do not have access to resources like music classes, singing lessons, etc.”

According to Pradhan, the a cappella spaces on campus appeared predominantly white. However, during her own audition process, Pradhan said she did not feel like an outsider in the GraceNotes as a woman of color.

“When I was going into the a cappella space at Georgetown, it can feel predominantly white. Performing arts in general are predominantly white, and so you can feel like an outsider going into these spaces,” Pradhan said. “The GraceNotes did not feel that way to me when I was auditioning, and that was one of the positives for me. I actually actively did think about that when I was a freshman auditioning.”

In addition to efforts to increase socioeconomic and racial diversity in their clubs, a cappella groups are also seeking to make applications more accessible to all applicants; the Saxatones, for instance, are working to be increasingly flexible with applicants and now accept video auditions, according to Wisco.

“As with many things, the pandemic allowed us to rethink different processes that we’ve often just copied from year-to-year. A lot of these have allowed for minor but effective changes. For instance, we now accept video auditions that give people another way to audition for our group in case they’re out of town or have too much going on that weekend,” Wisco wrote.

Since being back on campus, these efforts of some a cappella groups with applications and other aspects of their organization reflect changes that are intentional to make the processes more approachable for prospective members.

Even with an emphasis on inclusivity in applications by some a cappella groups, the audition cycles for these performing arts groups on campus are still competitive. Jalen Benjamin (MSB ’22), president of the Georgetown Phantoms, said he wished there was more space to grow the a cappella community.

“I would love to have it not be so exclusive. That’s one of the things that I dislike about all clubs at Georgetown and Georgetown culture. I think it can be very exclusive and selective, obviously just because of the space issues,” Benjamin said in a Zoom interview with The Hoya. “There’s finite resources, of course, but I would love to have more people in the a cappella community because it does feel pretty small at times.”

Moreover, Benjamin said that it would be a good thing for a cappella groups on campus to be less exclusive.

According to Wisco, auditions are often competitive across Georgetown’s six a cappella groups, since they are often looking to attract the same pool of applicants. Wisco said that while campus a cappella groups are all trying to gain new members, there is normally no bad blood between the ensembles.

“I do find there is some sense of competition during audition season, but that feels inevitable and inherent in the process. We’re all trying to get singers that will fit our group. Naturally, people will audition for multiple groups,” Wisco wrote. “There are typically no hard feelings if someone chooses another group over us.”

As the fall semester comes to a close, campus a cappella groups will be uniting for one event to mark the final weeks of the semester — the annual holiday tree lighting ceremony on Healy Lawn, according to Benjamin Eneman (COL ’22), a member of the Capitol G’s.

“We’re doing the Christmas tree lighting, so the a cappella groups are performing at that,” Eneman said in a Zoom interview with The Hoya. “That’s always a lot of fun.”

Looking forward, Wisco said she was happy to see Georgetown’s a cappella community working to increase collaboration since returning to campus, and hopes this attitude continues into the future.

“As for the greater a cappella community, I’ve also had an awesome time watching and developing friendships with other groups over the years. The current state of the a cappella community is definitely the most collaborative I’ve seen during my time at Georgetown, and because of that, it’s also been the most fun,” Wisco wrote.