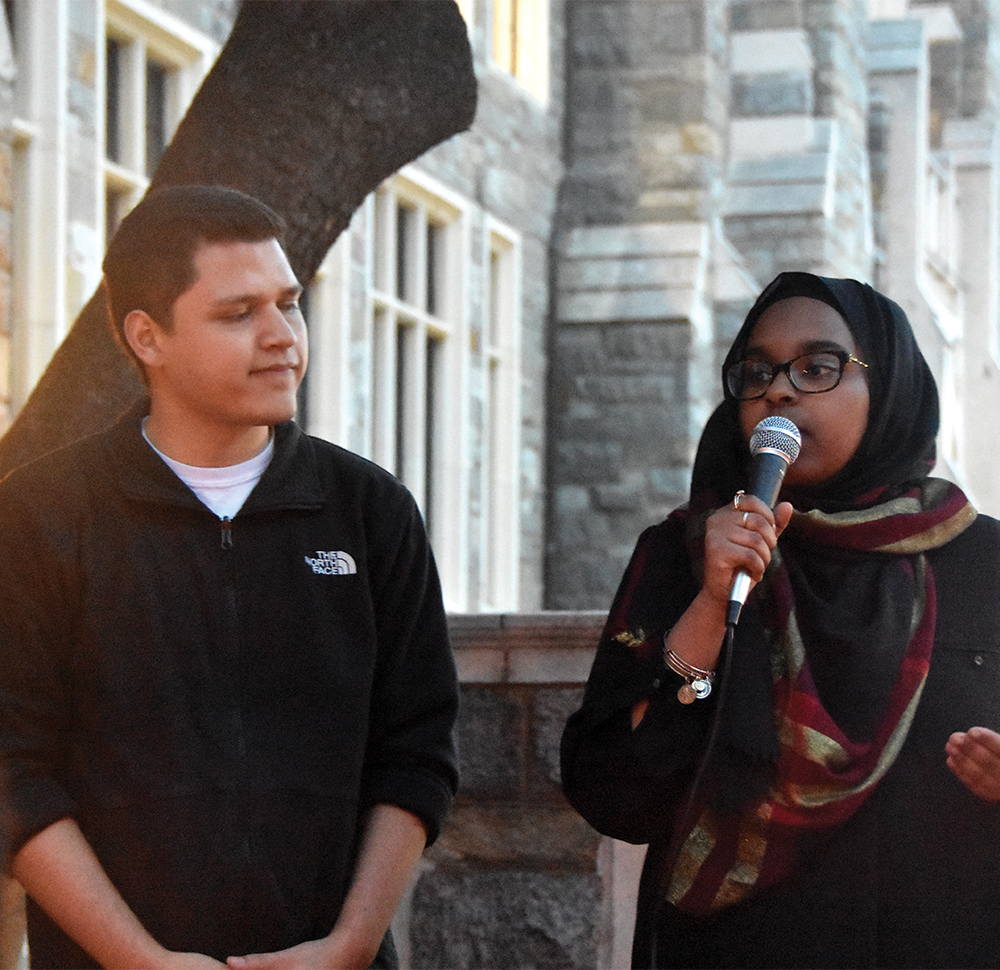 The brief is part of other measures announced by University President John J. DeGioia yesterday in response to Trump’s immigration order. Other initiatives include a training session for immigrant students on their rights if they are detained and advocacy for comprehensive immigration reform.

In light of the current national climate on immigration, the university community also came together last night in a vigil organized by the administration in solidarity with vulnerable communities on campus. About 50 students, faculty, administrators and members of the religious community attended the vigil, which highlighted religious teachings on immigration and refugees.

In a campuswide email Monday, DeGioia highlighted the contributions of campus communities now vulnerable under the Trump administration.

“We recognize the invaluable role that our Muslim and international students, scholars, staff, and faculty play — and the importance of protecting the ability of all members of our community to freely practice their religion,” DeGioia wrote.

The amicus brief was filed in the United States Court of Appeals for the Fourth Circuit in Maryland, which is set to hear oral arguments in a lawsuit brought against Trump and other members of his administration May 8. The plaintiffs in the case are requesting a stay of the order.

An amicus curiae brief, otherwise known as a “friend of the court” brief, is a legal instrument through which a person or group that is not party to a lawsuit can petition the court on behalf of the plaintiffs or defendants and thus sway the court’s decision.

The brief, signed by institutions including Harvard University, Yale University, Columbia University and Stanford University, specifically cited the benefits gained from the signatories’ diverse student bodies as an interest in the lawsuit.

The universities argued in the brief that international students, faculty and scholars are vital to their interests and cited the fact that U.S. universities accepted more than 1 million international students as a reason for suspending the ban. Such students, the brief says, accounted for 5 percent of national enrollment in the 2015-16 academic year.

The faculty senate, which consists of 75 full-time faculty members from the main campus, medical school and Law Center alongside senior administrators, announced in a campuswide email yesterday that they approved a resolution March 20 supporting those affected by the order, citing “America’s proud tradition” of welcoming immigrants.

“It is not for the United States government to adopt one religion and to reject individuals simply because of their religion or nationality,” the resolution reads. “We resolve to support and protect our faculty, staff, and students who have been and will be harmed by the order, and to stand up for their rights, including the protection of personal information, unless required by legal process.”

“We understand ourselves as a wandering people, and we understand what it’s like to be welcomed to a country when it’s convenient for that country and tossed out when it is fashionable,” Gartner said. “The Jewish community stands with our immigrant community because 36 times in our Torah — no less than 36 times — we are exhorted to treat the sojourner who lives among us exactly as we would treat ourselves.”

Although Trump has stated that he seeks to protect individuals present in the United States without authorization who would be granted relief under the DREAM Act, multiple reports of such detainments by Immigration and Customs Enforcement have surfaced in recent days. Against this backdrop, advocacy student group UndocuHoyas launched the inaugural UndocuWeek this week.

Luis Gonzalez (COL ’19), a student without documentation, said this kind of university rhetoric is what has made him feel welcome at Georgetown.

“The fact that as students we are able to put aside our differences and be able to listen and to have an open mind is what continues to convince me Georgetown is my home,” Gonzalez said. “I hope people in our community realize the huge impact they have in making sure those who are affected by drastic policy changes, hatred, among other things, feel supported.”

Aly Panjwani (SFS ’19), a Muslim student who attended the vigil, said the university has a special duty to advocate for the international community because of its religious background and history.

“Georgetown, a Jesuit Catholic university, with its history of participating in these oppressive power structures, has a responsibility to fervently counter this dangerous ideology in the White House,” Panjwani said. “Furthermore, it is these vulnerable communities that bring diversity and value to our Georgetown community and we must do our utmost to protect them.”

DeGioia emphasized other initiatives in the email, including the hiring of undocumented student adviser Arelis Palacios in November. He concluded that the international character of the university is essential to its mission.

“Ours is a global community — one made stronger by our religious, cultural and international diversity,” DeGioia wrote. “Today, and as we have throughout our history, we will make the effort required of us to support, sustain, and advance our global character, our commitment to religious diversity and interreligious dialogue, our commitment to freedom of speech, and our work to promote dialogue and encourage civility.”