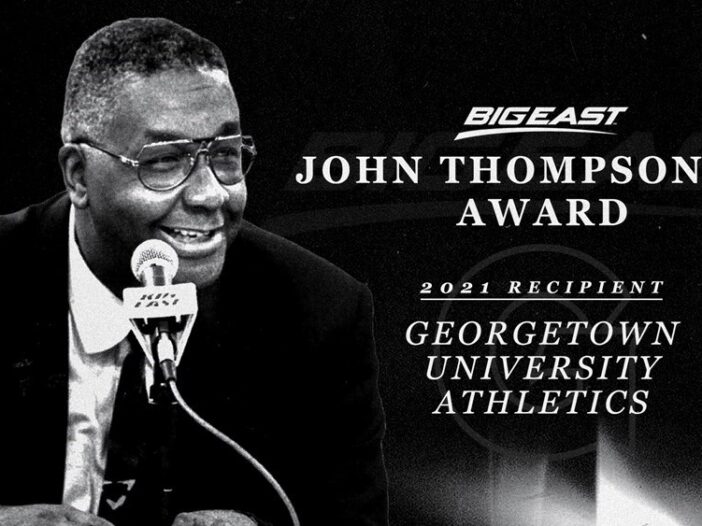 The Georgetown University athletic department was named the inaugural winner of the John Thompson Jr. Award Sept. 2, honoring its commitment to social justice in Big East Conference athletics. The announcement comes on what would have been the late Coach Thompson’s 80th birthday.

The award was established following Thompson’s passing in late 2020, and it annually recognizes efforts by a Big East athletic department, team or individual to “fight prejudice and discrimination and advance positive societal change” in accordance with Thompson’s advocacy for social justice throughout his lifetime.

Thompson’s character and invaluable role in pioneering societal change on and off the basketball court drove the conference to establish the award in October 2020, according to Big East Conference Commissioner Val Ackerman.

“Coach Thompson’s convictions and determination to reverse societal injustices helped define his life,” Ackerman said. “We hope this award will inspire the next generation of advocates to press ahead and pave the way for a more equitable world.”

The honor was awarded by one representative of the Thompson family and members of the Big East Diversity, Equity & Inclusion Working Group, which comprises athletic departments and university personnel across all Big East member schools.

The award honors the Georgetown athletic department’s leadership and social justice programs in the 2020-21 academic year. Ten submissions were received for this year’s edition of the award.

Last year, the Georgetown athletics department conducted programs like forums for athletes to discuss racial injustice led by Director of Intercollegiate Athletics Lee Reed in collaboration with the department’s internal Diversity, Equity & Inclusion Working Group, as well as Rosemary Kilkenny, who serves as Georgetown’s vice president for diversity, equity and inclusion. Georgetown also made strides in diversifying its coaching staff, hiring its first ever Black baseball coach and track and field head coaches this past year.

Last year, Georgetown men’s and women’s basketball players also donned equality-themed messages on their jerseys in accordance with issues that were important to each athlete. The women’s basketball team, meanwhile, participated in a “Pause for a Cause,” in which the team designated two weeks to focus on participating in conversations about racial justice and education about Black culture.

Outside of departmental programs, Hoya student athletes also took the initiative to create their own advocacy group in the Black Student Athlete Coalition, which spoke to Georgetown teams about issues of privilege and race. The Coalition also recommended action items for coaches to support Black student athletes at Georgetown.

Ackerman spoke about the accomplishments of Georgetown athletics in making strides toward social justice in a release announcing Georgetown as the winner.

“The initiatives undertaken by Hoya student-athletes, in particular, represent a powerful leadership example and make it clear that the principles of equity that Coach Thompson espoused remain deeply held on the Hilltop,” Ackerman said.

For women’s basketball Head Coach James Howard, this past year involved listening to the voices of his student athletes and putting basketball aside to focus on supporting his players.

“Our kids were really shaken,” Howard said in an interview with The Hoya. “I thought from a coaches’ perspective, and seeing the look on their face as young adults, you could see the concern. It wasn’t about basketball anymore. It wasn’t about going to the gym and getting that two hours of work. It was about listening and hearing and seeing what your kids were dealing with.”

Howard also noted the tireless efforts of Reed and others to continue to model Georgetown athletics in Thompson’s vision.

“We’re just so proud to be a part of this year and being picked as the winner of the John Thompson Jr. Award,” Howard said. “Georgetown is a mighty, mighty strong place, and for a leader like Lee Reed, it takes a lot to be able to take everything of Coach Thompson’s vision into play today.”

The Thompson award recognizes a hugely significant figure not only in Georgetown’s history, but in all of college athletics history, and as such is a great honor, according to Reed.

“Throughout his life, Coach Thompson challenged the status quo and brought to light so many injustices happening to those without a voice,” Reed said. “Georgetown University is honored to have an award bear his name, and we are proud to be the inaugural recipients. There is still more work to be done within this space, and we will strive to live his values within our community each and every day.”