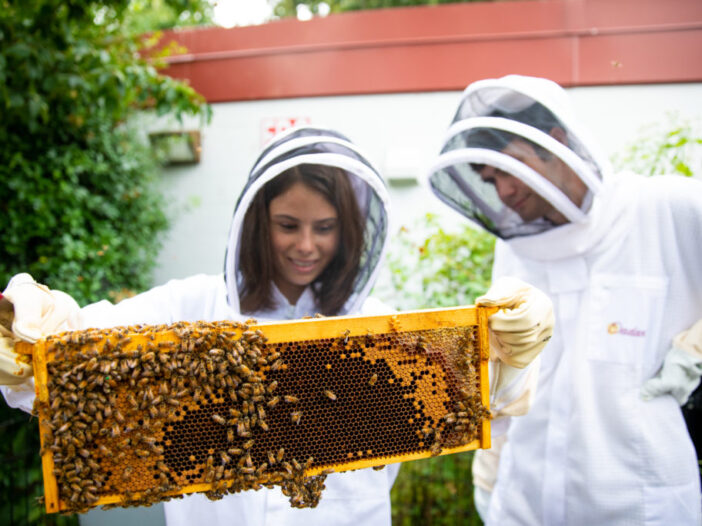 Georgetown University is joining an international initiative that will allow community members to upload photos of plants, animals and insects around campus to an app that will inform research about biodiversity on the Hilltop.

The Georgetown Bee Campus team, which consists of a group of five professors and several student assistants, is leading the university’s engagement with the initiative, entitled iNaturalist. The network is an initiative of the California Academy of Sciences and the National Geographic Society that tracks biodiversity and crowdsources information to help scientists understand when and where certain organisms are present.

In July 2020, Georgetown was designated a Bee Campus by the Xerces Society for Invertebrate Conservation, an international organization focused on the conservation of organisms crucial to biodiversity. This certification requires the university to make seven commitments that support the presence of bees and other pollinating insects on campus, of which the iNaturalist project is one.

Any Georgetown community member can take photos of flora and fauna on campus and upload them to the iNaturalist app, where artificial intelligence helps the user identify the species of the organism in the image. Data is then added to the iNaturalist network, helping researchers better understand what organisms are living in the area.

The Common Lantana, a red and yellow flower that blooms near the Healey Family Student Center, the Eastern Tiger Swallowtail butterfly and the Florida Predatory Stink Bug are among the 115 species dozens of community members have already identified as of Oct. 6.

Edward Barrows, a Bee Campus team member and biology professor who brought the idea of joining iNaturalist to the team, said the data has already enriched his understanding of the species that exist on the Hilltop.

“We need a comprehensive list of GU organisms to help sustain them,” Barrows wrote to The Hoya. “iNaturalist could eventually database 1000s of GU’s organisms. I’ve been looking at GU organisms since 1975, and iNaturalist is showing me GU species on campus I have not previously seen at GU.”

Bill Hahn, chair of the Bee Campus project and adjunct professor in the School of Foreign Service, said the project will allow the Bee Campus team to improve and evaluate the effectiveness of their conservation plans.

Barrows said Georgetown’s participation in the iNaturalist initiative advances the Bee Campus team’s goal to preserve biodiversity on campus, an important measure that is often overlooked.

“Many people I know have biodiversity blindness, including plant blindness and pollinator blindness,” Barrows wrote to The Hoya. “Earth’s biodiversity is crucial to humans’ health and survivorship as a species on Earth.”

Cynthia Wei, a member of the Bee Campus team and associate teaching professor in the School of Foreign Service, said she wants iNaturalist to inspire students to be more conscious of the hundreds of diverse species on campus.

“I hope people will be more aware of the pollinators around them and of nature around them more generally — I think it’s really easy to just not notice,” Wei said in an interview with The Hoya.

In addition to joining iNaturalist, the Bee Campus team is working on other projects to make the Hilltop more pollinator friendly for bees. The team is working to plant native plants, create nesting sites for insects and emphasize the importance of education about pollinators, according to Hahn.

Their strategy also includes teaching material on pollinator conservation, expanding student engagement in research related to pollination and posting flyers to inform about pollinators. The team’s work is funded by the Georgetown Earth Commons and a 2020 grant from the Laudato Si’ fund, which sponsors projects that improve sustainability on campus.

Wei said iNaturalist allows anybody to join a community of citizen scientists and engage with the preservation of biodiversity.

“When you learn more about something, you care more about it,” Wei said. “Once you know that it’s not just a bug, but actually a particular species with a name and history, behavior and how it’s different from others, it just becomes a lot more interesting and valuable.”