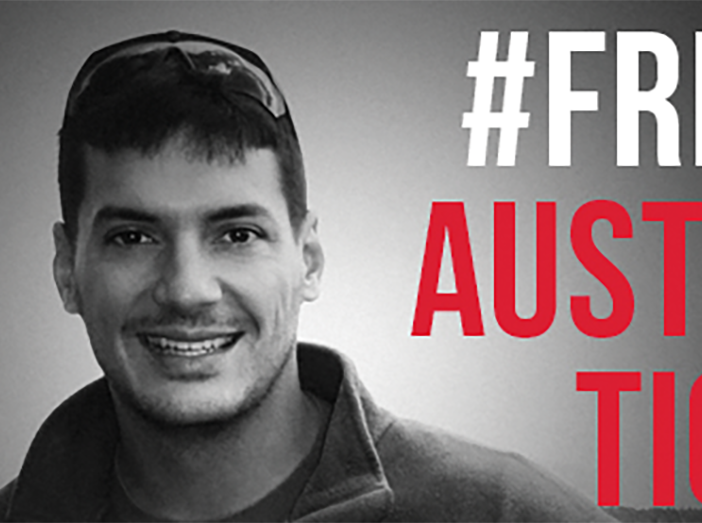 The Georgetown University community is pushing for the Biden administration to take action for the release of American hostages more than eight years after Austin Tice (SFS ’02) went missing while working as a freelance journalist in Syria.

Tice was kidnapped in Syria in 2012 while covering the civil war between the Syrian government and rebel forces during the summer after his second year as a student at the Georgetown University Law Center. Five weeks after he went missing at a checkpoint in Damascus, a video titled “Austin Tice is Alive” was posted on Youtube by an unknown user showing Tice surrounded by unidentified armed men. Tice is currently believed to be a captive of Syrian government affiliates.

The Biden administration will actively work for the return of American hostages, according to Joel Hellman, dean of the School of Foreign Service.

“Successive administrations of both parties have rightly made his return a high priority, and I am confident that this new administration will do likewise as a cornerstone of its commitment to the defense of human rights,” Hellman wrote in an email to The Hoya.

Since the Biden administration has taken office, Secretary of State Antony Blinken has already spoken with the families of Americans who are wrongfully detained or held as hostages abroad. The Biden administration will continue to negotiate on behalf of all U.S. citizens who are being held as hostages, according to a U.S. Department of State spokesperson.

“Bringing home American citizens held hostage or wrongfully detained is a top priority for the Biden-Harris administration,” the spokesperson wrote in an email to The Hoya.

The Biden administration has promised to work tirelessly to reunite families of hostages and detainees, according to CNN.

By risking his life as a journalist in foreign affairs to cover the events of the Syrian civil war, Tice embodies Georgetown’s values, according to Hellman.

“If anyone has shown his commitment to the values of SFS and Georgetown, it’s Austin Tice,” Hellman wrote. “At great personal risk, he felt compelled to show the world the horrors that the Syrian conflict inflicted on its own people. And in the process, he sacrificed his own freedom.

The first 100 days of Biden’s term will be the most important for determining how the administration will facilitate negotiations for Tice’s return, according to Christopher Voss, an adjunct professor in the McDonough School of Business and a former FBI hostage negotiator.

“The leadership is going to be massively different. The Trump administration was desperate to get a win just before the election, and they were willing to make the worst deals,” Voss said in a phone interview with The Hoya.

In August 2020, two senior Trump White House officials traveled to Damascus to discuss Tice’s case with the head of the Syrian intelligence agency. After this visit, Tice’s mother, Debra Tice, pleaded for her son’s release by Thanksgiving in an October 2020 statement. In her statement, Debra Tice argued that former Secretary of State Mike Pompeo had prevented Tice’s release by refusing to engage in direct diplomatic negotiations with the Syrian government while praising former President Donald Trump as an advocate and an ally, according to The Washington Post.

The Biden administration has the necessary political experience to successfully set the terms and engage in diplomatic hostage negotiations and international relations with countries in the Middle East, according to Voss.

“It’s a breath of fresh air to have a change in government administration that’s experienced. One of the things I think that everyone in the Middle East is hopeful for is that even though it’s a Democratic administration, Biden has been around for so long and has served a term as vice president,” Voss said.

The Obama administration also fell short in hostage negotiations, according to Voss.

“The Obama administration, on their hostage dealings overall, were very poor, and how much they capitulated, and how much they put on the table, they cut some embarrassingly bad deals. Biden is not likely to do that. This is a real opportunity for some stability in the region.” Voss said.

During former President Barack Obama’s administration, then-President Obama signed a 2015 executive order that made it clear the safe and rapid recovery of American hostages would be a top priority. The Obama administration also formed a cross-governmental team dedicated to hostage recovery and committed to prioritizing families in decision-making processes.

In addition to politicians’ work, the Georgetown community and members of the press have also continued to advocate for Tice’s safe return, according to Doyle McManus, director of Georgetown’s journalism department.

“There has been a heartening amount of advocacy from Georgetown and from the journalism community, and it hasn’t really let up over the past eight years,” McManus wrote in an email to The Hoya.

Several advocacy campaigns have pressed for Tice’s return including the 2019 “Ask About Austin Tice” campaign from the National Press Club Journalism Institute, which aimed to raise awareness about Tice among members of Congress. A social media movement #FreeAustinTice gained traction on Georgetown’s campus in 2015.

The Georgetown community must continue to work for Tice’s recovery, according to Hellman.

“All of us at Georgetown must continue to advocate with passion and conviction for the release of Austin Tice as he has done for those who suffered from hatred and violence,” Hellman wrote.