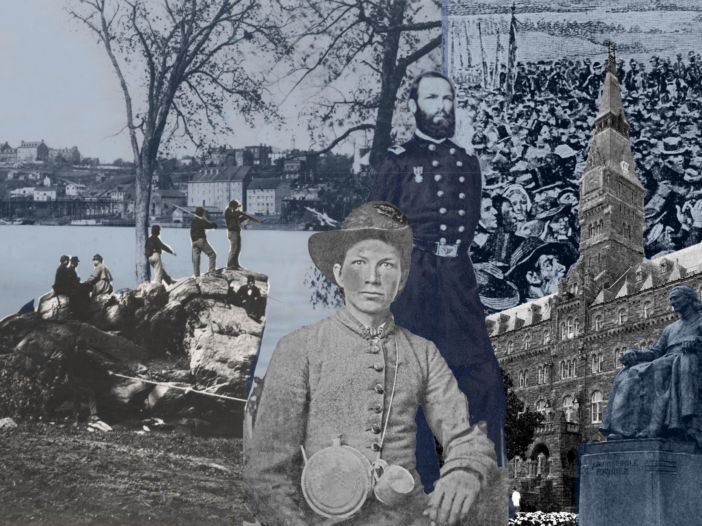 As Georgetown University track and field runner Malachi Quarles (COL ’23) puts on his uniform before a competition, he feels conflicted. His uniform is blue and gray, Georgetown’s school colors.

When Quarles learned in spring 2021 that the blue and gray refer to the Union and the Confederacy, respectively, it didn’t sit well with him, especially considering Georgetown’s participation in slavery.

“As a Black man, I have to be this person that is representing the school that I love, and also having to represent something that is just the antithesis of who I am,” Quarles said in an interview with The Hoya.

The official school colors of Georgetown University, blue and gray, were introduced to promote unity after the Civil War. Some members of the community argue that this narrative excludes Black voices and has sparked debate about whether the colors are appropriate.

The university was able to stay afloat in 1838 only through the sale of more than 272 enslaved people, who are now known as the GU272.

Learning about the colors’ history has made Quarles question his place at Georgetown and on the track and field team. He now thinks Georgetown should change its colors.

“I have to represent Georgetown every time I step on the track,” Quarles said. “It’s definitely been hard.”

About 10 years after the Civil War concluded, the Georgetown University Boat Club appointed a Committee on Colors to pick the school colors.

“The Committee, looking for colors to express the feeling of unity that exists between the Northern and Southern boys of the College, recommended the adoption of blue and gray,” according to the Georgetown library exhibition on the school’s history.

Eventually, those colors also became the namesake of Georgetown’s Blue & Gray Tour Guide Society. Last year, the organization considered changing the group’s name in light of its ties to the Confederacy, according to a statement from Blue & Gray.

On a national scale in recent years, Americans have — to varying degrees — also confronted the historical memory and lasting impact of the Civil War and slavery. Although Blue & Gray did not change its name, those discussions came as Georgetown continues to grapple and reconcile with its direct ties to slavery.

A Symbol of Unity?

Georgetown’s school colors only scratch the surface of the university’s connections to the Civil War. The campus itself became a Civil War site, temporarily housing a Union militia in 1861, while several campus buildings were turned into hospital accommodations after the Second Battle of Bull Run.

Despite Georgetown’s location in the nation’s — and the former Union’s — capital, most Georgetown students supported the South’s secession, according to Georgetown history professor Adam Rothman, the curator of the Georgetown Slavery Archive. Of the 1,141 Georgetown students and graduates who enlisted in the war, about 80% fought on the side of the Confederacy.

“Everybody who was connected to Georgetown during that era was somehow involved in the war. It touched their lives,” Rothman said in a Zoom interview with The Hoya. “If you dig a little into the colors, then you quickly learn that the Georgetown community really sided with the Confederacy for the most part.”

Naturally, campus life was tense in the months following the war, as students returned to campus to attend classes with peers who had served as, or were the sons of, enemy combatants for the previous four years. The choice of blue and gray for the school colors represented an attempt at reconciliation among these students, according to Rothman.

The university’s official account of the school colors credits the Georgetown Boat Club as the first organization on campus to adopt the colors in 1876, according to the Georgetown library’s “Shades of Blue and Gray: Georgetown and the Civil War” exhibition.

The boating club’s decision is one example of an expanding rapprochement between the two sides after the war, but it came at the expense of Black voices, according to Rothman. After the Civil War, Georgetown maintained its whites-only policy. The university did not accept a Black undergraduate until 1950.

“For the most part this was a reconciliation among white northerners and white southerners over the war, and, increasingly, the Black Americans who fought in the war were displaced and sidelined by that process of reconciliation,” Rothman said.

Discussions of reconciliation across the country systematically excluded Black people, according to Dawn Chitty, the director of education at Washington, D.C.’s African American Civil War Memorial Museum. These exclusively white dialogues have contributed to a sanitized history of reconciliation that is taught in schools today, Chitty said.

Much of the museum’s work involves bringing to light the many Black perspectives from the Civil War that are historically overlooked, to ensure a more truthful retelling of the era’s history, according to Chitty.

“The narrative of Blacks in the Civil War, as soldiers, has grown so much from where it was 20-something years ago when the museum started,” Chitty said in a Zoom interview with The Hoya. “But in a way, we still have so far to go because of the tide of misinformation and challenges that we’ve had with racism in the last several years.”

The Blue and Gray

Recently prompted by student activism, the university has begun to reckon with its history of slavery, including renaming several campus buildings. With this increased scrutiny on the university’s past, movements to change the school’s official colors have gained traction in the Georgetown community.

Members of the Blue & Gray Tour Guide Society, who are tasked with purveying Georgetown’s history to prospective students, are aware of the history behind the school colors, according to the statement from the Blue & Gray Executive Board.

In an official Blue & Gray tour, prospective students and families walk along a routine route through Dahlgren Quad and past the steps of Old North, according to Blue & Gray tour guide Camber Vincent (SFS ’24). At the top of those steps is a plaque that introduces the context behind the school’s official colors — and, by extension, the tour guide society’s name.

“From 1861 to 1865, in America’s tragic epic of the Civil War, 1138 sons of Georgetown in blue or in gray offered themselves on the altar of patriotism in the defense of the constitutional rights to which they were bound in conscience,” the plaque reads. “This tablet is dedicated to their memory.”

Vincent said he was unaware of the colors’ meanings until he began giving tours for Blue & Gray during summer 2021. At the end of tours, visitors sometimes ask whether the tour organization is planning to change its name, according to Vincent. [Full disclosure: Vincent is a member of The Hoya’s Editorial Board.]

These questions about the legacy of the school’s colors led to conversations among Blue & Gray’s leaders to change the name of their organization, according to a Blue & Gray Board email to The Hoya.

Although these conversations did not ultimately lead to a name change for the organization, they prompted leaders to reexamine the ways guides speak about Georgetown’s history with visitors, resulting last year in several changes to the tour manual.

“We, as the 2021-2022 Executive Board, continue to hold ourselves, the organization, and individual guides accountable and responsible for sharing this information regarding Georgetown’s role in enslavement and the Civil War to tour groups,” the board wrote.

The manual now includes an explanation of the university’s close ties to slavery, recent name changes to campus buildings, and the impacts of student activism pertaining to Georgetown’s history, according to a copy of the fall 2021 manual obtained by The Hoya. However, the current manual does not explain the history of the colors.

Additionally, Blue & Gray’s Executive Board removed the explicit mention of school colors from the manual by the 2019-20 academic year, according to an email from the board. Blue & Gray’s website also does not explain the ties between Georgetown’s colors and the Civil War.

The 2021-22 board intends to continue discussions of a potential name change for the organization, according to an email from the board.

“We are committed to working alongside our guides, liaisons at the Office for Undergraduate Admissions, and the greater Georgetown community in furthering improvements within the organization, including the possibility of a future name change,” the board wrote.

Vincent, however, believes these discussions should take place at the university level rather than in Blue & Gray itself.

However, by keeping its current colors, Blue & Gray is also responsible for perpetuating an inaccurate story of reconciliation, according to Melisande Short-Colomb (COL ’21), who serves on the board of advisers for the Georgetown Memory Project and is a founding councilmember of the GU272 Descendants Association. She is also a descendant of the GU272.

“The Blue & Gray Society, for many years, has been telling the mythologized ‘let’s leave other people out of the history of Georgetown,’” Short-Colomb said in a Zoom interview with The Hoya. “The blue and gray exist because of slavery.”

Students do not arrive at Georgetown with a knowledge of its history, and they often do not acquire it while at Georgetown either, according to Short-Colomb.

“Students come in first year, first semester, and don’t know anything about the physical place that they occupy,” Short-Colomb said. “And I came here, because I did want to be a part of cementing the idea of honoring the involuntary founders of Georgetown University.”

Quarles, who also competes in the hurdles for Georgetown’s track and field team, learned about the colors after a year and a half of sporting them at track meets, in Rothman’s “Facing Georgetown’s History” class, which explores Georgetown’s history of slavery. Quarles said it was shocking to learn about the history of the colors during his later years at Georgetown.

“It’s right under the tip of your nose,” Quarles said. “You need to understand and know the things that you are a part of.”

The lack of awareness among the Georgetown community regarding the origin of the school’s colors and their direct ties to the Civil War signifies a cultural shift, according to Rothman.

“Naming stuff isn’t enough or removing names isn’t going to help either if we don’t know what the meaning behind those symbols is in the first place,” Rothman said.

Short-Colomb said students need to be at the center of maintaining the memory of Georgetown’s troubled history, including that of the school colors.

“It is incumbent upon every generation of students who come to Georgetown, who are committed to educating themselves to go out into the world and be change makers, to take the eight semesters that you’re at Georgetown, and make a lasting and effective change there,” Short-Colomb said.

Every member of the Georgetown community has an obligation to learn about both the good and the bad of the university’s history, according to Rothman.