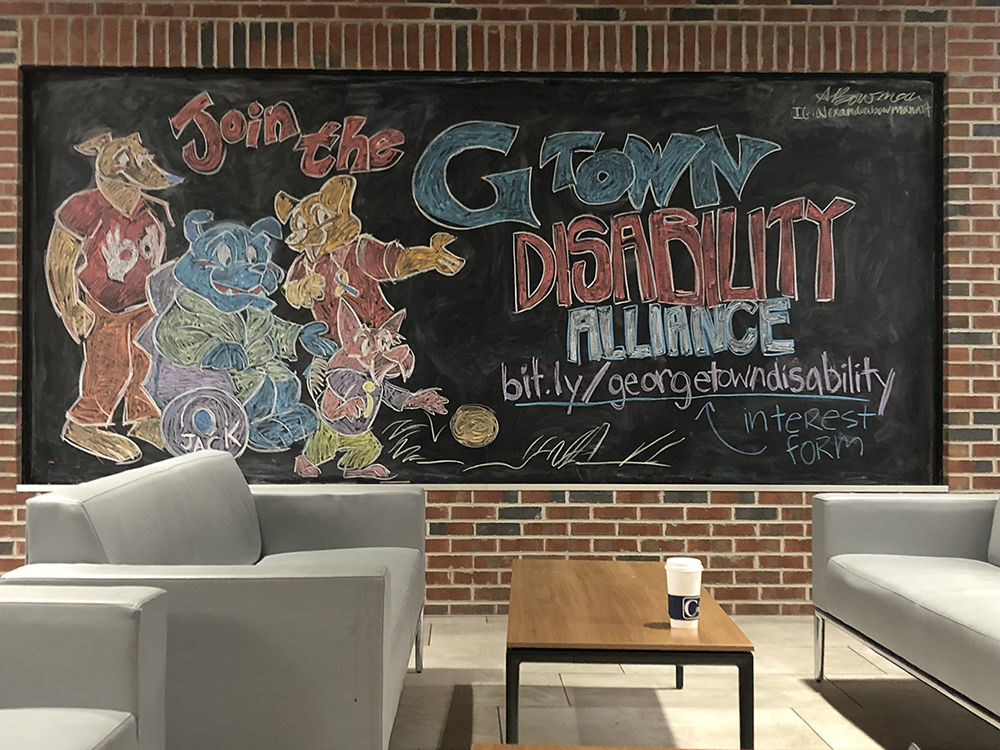 Georgetown Disability Alliance, a developing student organization, will encourage education on disability issues and advocate for on-campus accessibility and awareness of both physical and mental disabilities in its conception, according to a Sept. 7 announcement.

Co-founders Anna Landre (SFS ’21) and Kenna Chick (SFS ’20) are founding the student organization to draw attention to issues affecting students with disabilities on campus. Specifically, the alliance plans to advocate for increased funding and staffing for the Academic Resource Center, which provides academic assistance for students with chronic health conditions, learning disabilities and psychological/psychiatric disorders, according to Landre and Chick.

The Georgetown Disability Alliance is not currently recognized by the Student Activities Commission, but Landre and Chick plan to undergo the new club development process next semester to be fully recognized and receive Access to Benefits status.

“At a school like Georgetown, disability is not something you really talk about because it’s seen as incompatible with your success here, with fitting in here, especially when it comes to learning disabilities and mental health issues,” Landre said in an interview with The Hoya.

Despite the stigma surrounding those living with disabilities, as many as 1 in 8 Georgetown students are registered with the ARC, according to Landre. The club plans to work on expanding the ARC’s resources to better accommodate these students. Additionally, Landre and Chick plan to potentially work toward creating an Americans with Disability Acts Compliance and Advocacy officer within the Georgetown administration.

“I have felt a pretty big lack of community,” Landre said. “It’s been kind of on an individual basis with meeting random people.”

Georgetown launched its Disability Studies program in 2017, allowing students to minor in the study area, though some courses were available as early as 2010. The Georgetown Disability Alliance will add to a lineage of steps taken on campus to bring more awareness to members of the Georgetown community living with disabilities, according to Sylvia Önder, a Disabilities Studies faculty member.

“We have a long way to go, but we have also, over time, improved awareness of the problems by teaching a variety of Disability Studies classes here at Georgetown,” Önder said in an interview with The Hoya. “I am impressed by our students’ willingness to listen and learn, and by their impulse to take action and get things done to make this a better place for us all.”

Requests for accommodations under the Americans with Disabilities Act are currently referred to Rosemary Kilkenny, the vice president for Institutional Diversity and Equity for the university. Creating an inclusive community for students with disabilities through language and actions is important on campus, according to Kilkenny.

“It is incumbent upon us to recognize that as members of this community, we all share and have a responsibility to foster an inclusive environment in our verbal communications and actions,” Kilkenny wrote in an email to The Hoya.

The student organization is an opportunity to better articulate the needs of students with disabilities and provide them with a more fitting support system that expands past medical accommodations, according to Chick.

“A lot of the times when people think about disabilities, they think about it in terms of more accommodation and medical needs,” Chick said in an interview with The Hoya. “But we’re finding more and more the case of students wanting and needing additional support when it comes to navigating society as a person with a disability.”

The club will further serve to educate Georgetown students through conversations on how disability relates to identity, according to Chick.

“People don’t view disability as a social identity, even though it is and that’s kind of where a lot of difficulty comes in when we try to have conversations with people to talk about diversity and inclusivity,” Chick said.

This article was updated on Sept. 22 to correct the year the Disability Studies minor was approved.