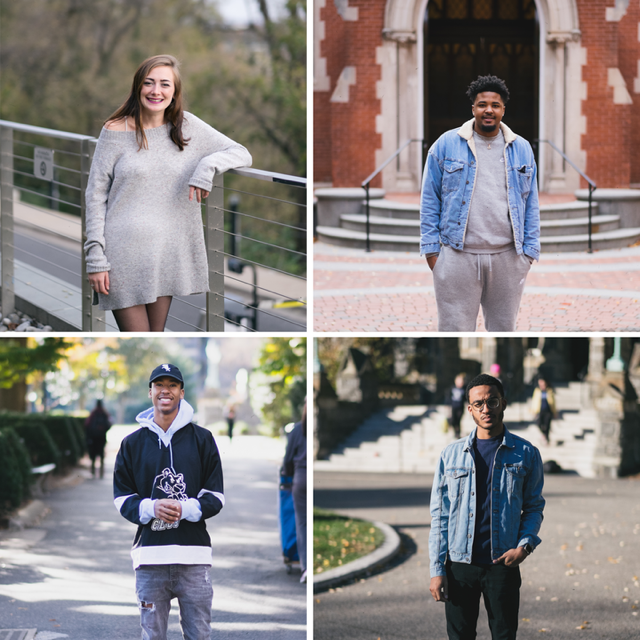 “Community in Diversity.” One of Georgetown’s oft-touted Jesuit values, the phrase is often mentioned by the university to entice prospective students. Students may catch a glimpse of it on a banner around campus in their day-to-day hustle or in the university’s promotional materials.

Behind the flashy catchphrase, the question remains: What does it actually mean to be a community in diversity?

From an admissions perspective, of the 1,633 students in the Class of 2021, 227 are Asian, 183 Hispanic and a record 172 are black. Together, they make up 35.6 percent of the class — while nearly two-thirds of students, 64.4 percent, are white. By comparison, white students make up 58 percent of all college students nationwide.

This disproportionality is not limited to race. According to a study by The Equality of Opportunity Project published by The New York Times in 2017, the median income for a parent of a student in Georgetown’s Class of 2013 was $229,100, the 8th highest of the 2,395 U.S. colleges surveyed. More students at Georgetown come from families in the top 1 percent of income earners than from the bottom 60 percent combined.

Despite the university’s efforts, challenges remain in promoting a true community in diversity — one that fosters a sense of inclusion for those of traditionally marginalized socio-economic, racial and sexual backgrounds. The numbers tell one story, but the students tell another.

Emily Kaye (COL ’18) never thought she could get into an Ivy League school. Her admission to Cornell University was not only a surprise, but also an escape from the stress of impending foreclosure and her parent’s divorce.

“I was hyping up college so much in my younger years because it was like my escape, what I was looking forward to — to get out of this home life that hadn’t really given me what I needed to get out of it in terms of growing and learning,” Kaye said.

After a year at Cornell, Kaye transferred to Georgetown.

“I was looking for a school that would stimulate me more intellectually outside of the classroom and also feel more like a community around things that I valued, such as the independence and the drive that I grew up with,” Kaye said. “I found that in the Georgetown Scholarship Program, and that’s when I started to understand my identities more of being first-gen and low-income.”

Each year, GSP provides financial support and mentorship to at least 170 low-income or first-generation students. GSP creates a community of over 650 students to help them navigate the unfamiliarity of college.

“It’s important to recognize that part of this campus is really wealthy, but there’s another part that is not,” Kaye said. “We have to acknowledge those differences and learn from them, but not in a way that isolates other people.”

Fax Victor (COL ’19), another GSP student, said the organization has made tremendous strides in promoting diversity in ways beyond financial inclusion.

“GSP, they do a great job of reaching out to other communities, like the Black House, the Casa Latina, to ensure that other people are not forgotten, that it’s not just about being low-income, it’s about the overall picture of just being together despite whatever differences we may have, either racially, ethnically or just in thoughts,” Victor said.

Victor grew up in Boston surrounded by elite universities like Harvard and the Massachusetts Institute of Technology — and detractors telling him he was not good enough to get into them.

“Things didn’t go my way when I was younger. My parents separated. I was stuck as a kid, in the sense that I had to grow up very fast,” Victor said. “Many people didn’t see the idea of me going to an elite college, period; it wasn’t heard of where I’m from. So the fact that I actually did it, and I still want to do bigger and better things, had me feeling like an underdog.”

Thanklessly compassionate. Thrilling. Challenging but rewarding. Meant to be.

While each student has different experiences both before and during college, Georgetown brings them all together.

Amanda Scott (COL ’19) never went to high school. But Scott’s nontraditional education did not prevent her from pursuing her dreams: Having been homeschooled, she got her General Educational Development diploma at age 20 and attended Coastal Alabama Community College in Bay Minette, Ala., for two years before transferring to Georgetown.

“College was not a standard or expectation for me growing up,” Scott said. “I didn’t know exactly what to expect when I came to Georgetown, because I didn’t come from a traditional background like a lot of my peers did. But I’ve really found that my work experience and background has helped me, helped my worldview.”

Like Kaye and Scott, GSP student Deshaun Rice (COL ’20) followed an unlikely path to Georgetown. After his junior year in high school left him in trouble at school and with the law, he had a change of heart that may have meant the difference between life and death.

“Eleventh grade I almost failed. I think I ended my junior year with, like, a 1.2 [GPA]. I actually was in a gang at that point and had been to juvenile. That summer I decided that if I don’t get anything changed, I’m either going to end up dead like my friend or behind bars. That wasn’t the life for me,” Rice said.

But by his senior year, Rice raised his GPA to a 3.7 and earned a full scholarship to Georgetown. Despite the GSP aid, the transition to college was difficult for Rice.

“I was behind when I got here, in terms of books people had read or even just how to take notes in class. I was almost dismissed from Georgetown because I had failed two classes spring semester of freshman year,” Rice said. “In the fall, when I came back to Georgetown, I was working three jobs because I was preparing to have a son. I really didn’t have any money when I came, so the first couple of weeks I didn’t have any food.”

The combination of financial and academic stress reached a tipping point after Rice’s first year at Georgetown, leading him to take a yearlong medical leave of absence.

“All of that just hit me. I didn’t know what was going on. I thought it was normal to feel like this,” Rice said. “I got depressed. I actually tried to attempt suicide. I failed and ended up being admitted to the Georgetown psychiatric unit.”

After a year away from the university, Rice feels more prepared to deal with the differences between his life back home and college life.

“I feel like that time away from Georgetown helped me grow and mature and see that self-care and mental health is an important thing, especially as a college student at a top-tier, elite university where just the pressure of being here and the expectations people have of you can be stressful,” Rice said.

First-generation college students like Rice face distinct challenges. In particular, many struggle to navigate differences with their peers from more traditional backgrounds.

Scott, who identifies as openly bisexual in addition to being low-income and first-generation, said she feels that Georgetown supports certain aspects of diversity more than others.

“It’s more diverse than I had anticipated, in the sense that we do have an LGBTQ center. But sometimes, I am surprised at the lack of diversity,” Scott said. “Although on the surface there may be programs for LGBTQ students, for immigrant students and people of color, I think it’s really lacking in socio-economic diversity.”

Justus Pugh (MSB ’20), who said he specifically selected Georgetown because he felt its global mindset would embrace diversity, was surprised to find the diversity of the campus fell short of his expectations.

Nevertheless, Sayako Quinlan (SFS ’18), who interned for the Center for Multicultural Equity and Access, believes the university has made progress in terms of including and providing support for groups with diverse identities through institutions like the CMEA.

“Throughout my first year, I noticed that for me, the most salient topic in diversity was race. However, as a half-Japanese, half-white person, that often meant racial advocacy for people more marginalized, more underrepresented or more oppressed,” Quinlan said. “The best way I could describe diversity at Georgetown for me has been a work in progress. The work the CMEA does is really helping to make it a place for all people.”

Now an outreach and strategic partnership chair on GSP’s student board, Victor is currently spearheading efforts to increase the diversity of Georgetown’s applicant pool. In high school, Victor attended the Crimson Summer Academy at Harvard, which offers 30 students across the Boston and Cambridge public school system the opportunity to take classes and be immersed in the culture of a college campus. He is now working with the admissions office to create a partnership between the CSA and GSP.

“This would one, contribute to the diversity of Georgetown, but also the thought that these students needed to know what Georgetown has to offer, because I feel like other schools don’t offer anything close to Georgetown,” Victor said.

Despite remaining challenges, Kaye said she commends the efforts by the university and GSP to continuously improve when it comes to diversity on campus.

“The administrators are trying so hard to make this place what they know it should be. Especially compared to other universities, they are doing a good job,” Kaye said. “It’s helpful and productive to be critical of the university, but only in the context of what other universities are doing. I want to continue to hold them to a high standard.”