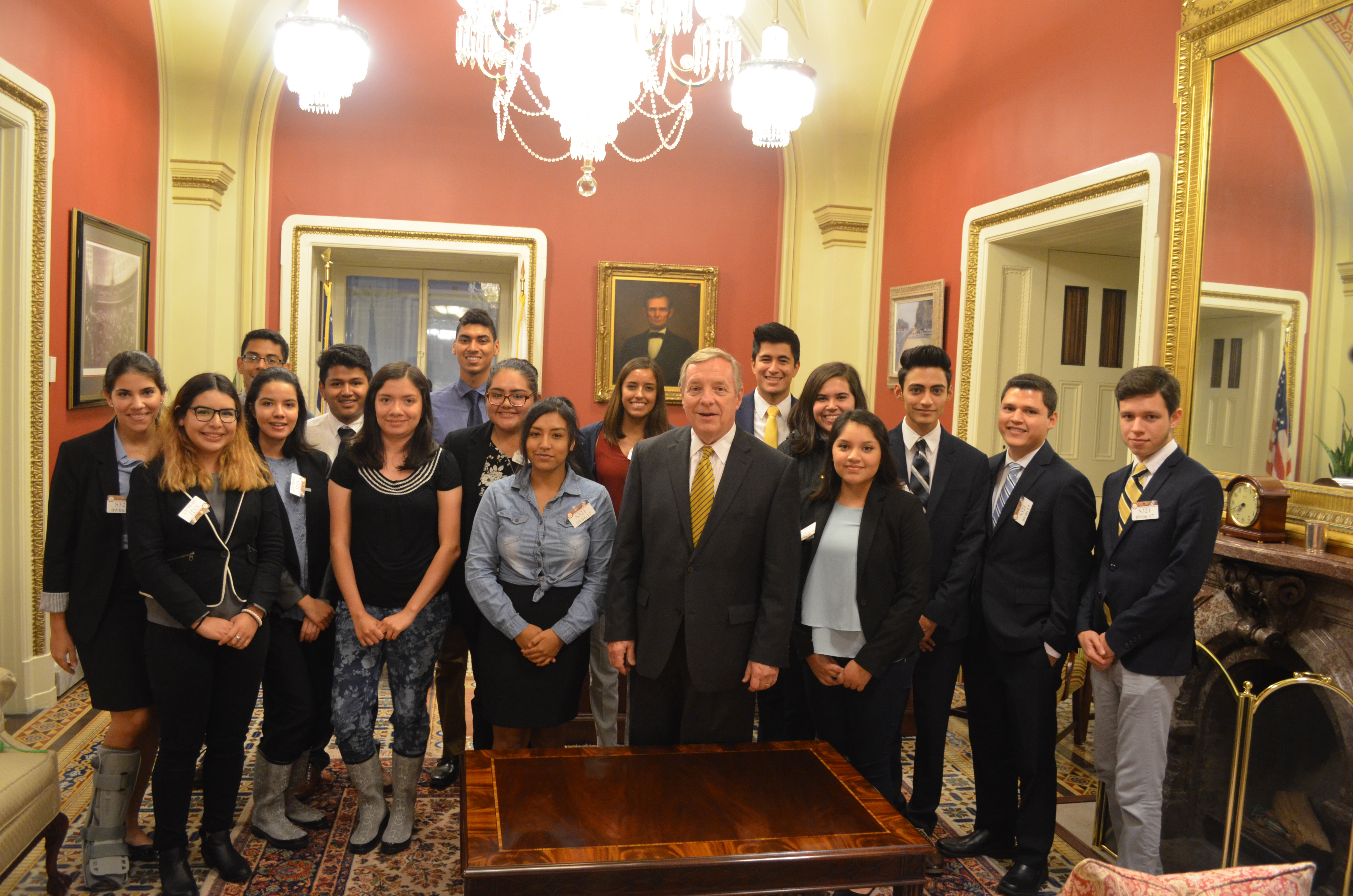 Democratic Sen. Dick Durbin (SFS ’66, LAW ’69) of Illinois hosted 16 students without documentation on Capitol Hill to express his support after this week’s repeal of the Deferred Action for Childhood Arrivals program.

The students, some of whom were protected under the Obama-era policy, watched from the Senate floor gallery as Durbin delivered a speech advocating for a legislative fix for the so-called “Dreamers,” young adults who were brought to the United States as children and have been living without documentation for years.

“I’m joined this evening by a number of visitors in my office. They are the Dreamers from Georgetown University, my alma mater,” Durbin said on the Senate floor. “I thought it was a pretty big deal when I transferred from St. Louis University to come out here to Georgetown … but what I did was nothing compared to what they have done.”

Durbin’s remarks and invitation come on the heels of Attorney General Jeff Sessions’ announcement Tuesday that the Department of Homeland Security would phase out the DACA program by March 2018, closing the pool to initial applicants and allowing recipients to keep their employment authorization documents until they expire.

Amid uncertainty about how the federal government might shape immigration policy in the coming months, the students discussed the political climate and the legislative conditions under which Congress could attempt to pass the Dream Act of 2017, which would grant deportation reprieve and a pathway to citizenship to young immigrants without documentation.

Sanjuana Castorena (NHS ’21), who is a DACA recipient who attended the discussion, said learning about the bill gave her an optimistic outlook about a possible legislative solution.

“The political climate has always been tense and aggressive with any sort of immigration act or proposal, but this specific moment has left me hopeful,” Castorena said. “I feel more confident in the Dream Act picking up votes and possibly passing, but it would take more movements like calling our representatives from our states to remind them what it’s all about and how important it is.”

Durbin has been an advocate of immigration reform in the Senate since 2001, when he introduced the Development, Relief and Education for Alien Minors Act, the original DREAM Act. Durbin thinks the political climate could be conducive to pass a bill.

“This may be what we need: We need to have our backs against the wall, a moment of reckoning where we have to go on the record,” Durbin said in an interview with The Hoya. “I can’t guarantee anything — I’ve been around in Congress too long to ever do that — but I feel good that if we can get this measure on the floor, we can pass it.”

The Dream Act has garnered four Republican cosponsors, including Sen. Lisa Murkowski (COL ’80) of Alaska. To attain the 60 votes needed for legislation to overcome a filibuster — a procedural move used by senators to kill a measure — the bill needs eight more Republican supporters, assuming all Democrats vote in favor of it.

A host of other bipartisan legislative measures to grant legal status to Dreamers are also on the docket for this Congress, including the Recognizing America’s Children Act and the American Hope Act.

The White House has signaled its support for the Reforming American Immigration for Strong Employment Act, which includes no language regarding students without documentation in its initial form.

Many DACA beneficiaries are concerned about the extent to which the information they have put on their applications will be used for enforcement purposes. The Department of Homeland Security told recipients Tuesday it would not “proactively provide” the data to law enforcement.

However, DHS said it will cooperate with Immigration and Customs Enforcement if requested and where there is “a significant law enforcement or national security interest,” such as gang membership.

In addition to Durbin, several members of the Georgetown community have advocated for a policy that would help Dreamers, with University President John J. DeGioia calling the decision to rescind DACA “unconscionable.”

Juan Martinez (SFS ’20), a DACA enrollee, said the university is supporting students in many ways, including by providing funds for application fees and advising.

“Coming here, I never knew I would receive this much support, and I was surprised,” Martinez said. “It just really reassures me and allows me to pursue my studies first, because I know that I’m going to be supported and that’s something that a lot of undocumented students haven’t had in the past.”

Georgetown has taken steps to institutionalize support for students without documentation, including hiring Arelis Palacios as the university’s first full-time associate director for undocumented student services and creating a website last year to aggregate university resources for this community.

Through a program called Friends of Dreamers, students and faculty have also addressed more than 1,000 letters to members of Congress urging them to support the Dream Act. The letters include a narrative about a Georgetown student living without documentation.

Associate Vice President for Federal Relations Scott Fleming (SFS ’72), who oversees the letter-signing initiative, said it has received overwhelming support in its initial stage and will continue.

“We have to put a face on this legislation, because when you put a face on it it can be very powerful and very convincing, so we intend to continue that campaign,” Fleming said. “I would say to any student who has reasons to question this legislation, … meet a few of the Dreamers on our campus, and I think after you meet these individuals you would be very hard-pressed to not want them to be part of our country.”

Durbin, who has told the stories of over 100 Dreamers on the Senate floor, agrees.