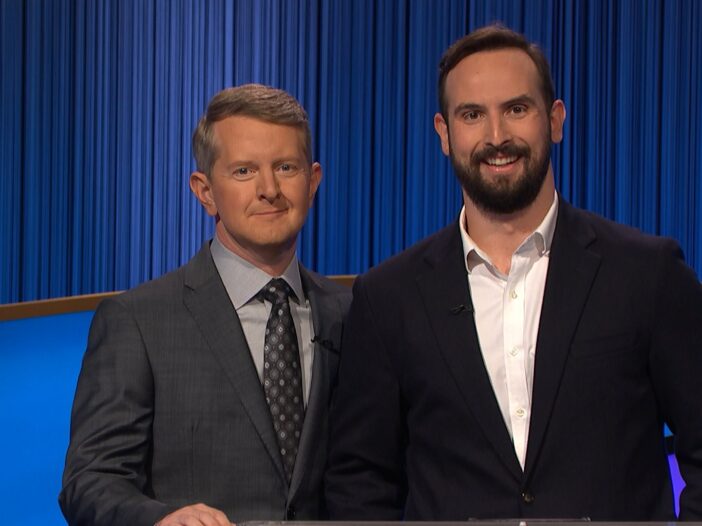 Patrick Curran (CAS ’14, GRD ’19) competed in three games of “Jeopardy!” during the show’s 39th season. Curran, a double Hoya and lifelong Jeopardy fan, qualified to appear on the game show after completing the show’s preliminary test. After a two-game winning streak, Curran lost by $11,399 despite correctly answering the final jeopardy question that asked about Jack Daniels, the largest employer in the dry county of Moore, Tennessee.

Curran said it was sentimental to appear on a show he loved watching as a child.

“I’ve been watching the show my whole life, just something that was always on growing up,” Curran told The Hoya. “My parents both love it, and my dad loved it. He died a few years ago. My mom still watches every single night.”

Curran said he prepared to compete on the show after practicing with an unusual tool — kids’ reference books.

“This was a tip my mom gave me,” Curran said. “So I went down to the Georgetown branch of the D.C. Public Library and got out a bunch of simple books either explicitly directed to kids or just simple, basic reference books.”

Beyond these books, Curran trained using online trivia games and board games.

Curran also said his experience as a journalism minor in college and his family’s history working in journalism — Curran’s father and grandfather were journalists, and Curran himself was a sports editor for The Hoya — helped him pick up some trivia.

“When you read a lot of journalism, especially if you practice it in any way, you get exposed to things that you wouldn’t necessarily be seeking out as part of your day to day,” Curran said.

Curran said the “Jeopardy!” staff provided support during production, makeup and wardrobe, and he felt even more prepared because he had created his own buzzer at home.

“I made a little fake one with one of those spring wood and plastic toilet paper holders,” Curran said. “So I was very prepared, I felt like, and the staff does a really good job of making everybody feel comfortable.”

“It was cool to see someone on the show who I have something in common with, even with it just being something small like having gone to the same school,” Callahan wrote to The Hoya. “He did really well and won two games in a row, which was pretty impressive.”

Curran said he was surprised by how much attention the press have given to his “Jeopardy!” appearance.

“I’ve done TV appearances, like multiple local TV appearances,” Curran said. “I was shocked that it caught on as much because if you ever watched ‘Jeopardy!’ there’s somebody from the D.C. area on every other night.”

Hunt said many people from the bar gathered to support Curran at energetic watch parties.

“He’s been a regular at our trivia at Breadsoda for years, and it was so awesome to see everyone there rally around him,” Hunt wrote to The Hoya. “The watch parties were absolutely electric. I couldn’t be happier for Pat, because he’s not only a world-class trivia player, but a world-class human being as well.”

Curran said he would like to use the money he won to make a down payment on a house, purchase a gift for his mom and go on a trip with his wife.

Curran said the show is challenging but not impossible and that he encourages anyone with an interest in the show to apply.

“I love to hammer home that anybody can take this test,” Curran said. “It’s free, it’s online. There’s zero barrier to entry. If you don’t have a computer, you can go to the library. D.C. public libraries are great. You can go to the library and take it there. You never know when you’re going to get the call.”