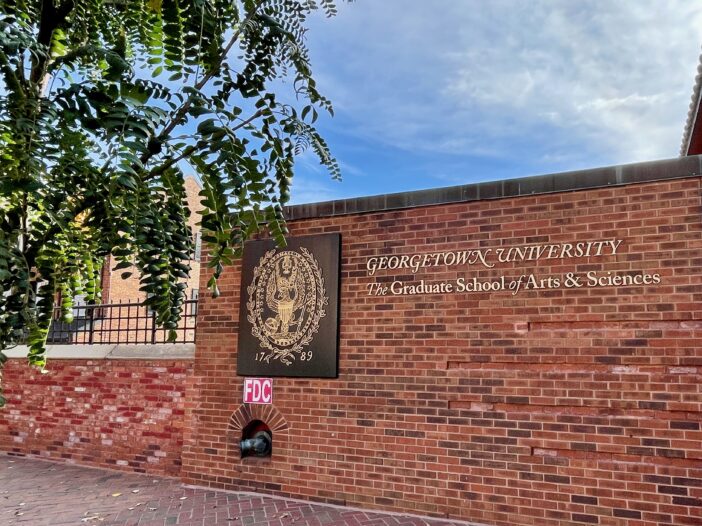 Georgetown’s Graduate School of Arts and Sciences awarded five students with the Patrick Healy Graduate Fellowship, which provides five years of financial support and other resources to select Ph.D. candidates in any field.

The annual award is named after Patrick Healy, Georgetown University’s 28th president. Healy was the first Black person to earn a doctoral degree from a university in the United States and the first Black president of Georgetown. The fellowship aims to carry on Healy’s legacy of training diverse future faculty, researchers and leaders to advance knowledge across disciplines.

While incarcerated Chocos earned a bachelor’s and master’s from Bard College. In 2013, he became a licensed Baptist preacher. After his release from prison, he became the first formerly incarcerated person to attend Yale’s Divinity School, where he earned two more master’s degrees.

Chochos, who is studying philosophy, said receiving the fellowship has prompted him to think about education opportunities for other formerly incarcerated people.

“I think of all the people who could have been in my position but aren’t because they didn’t have access to the education opportunities I had,” Chochos said in an interview with The Hoya. “This is huge for me and my family.”

Chochos hopes to use his personal experience with the criminal justice system to shape the discussion of issues surrounding incarceration with his fellowship.

“I kind of want to use my scholarship to add that voice in that lens to the great conversation that’s already going on,” Chochos said. “I want to kind of use that as a theological lens to talk about why we need to expand higher education in prison for people who are in that marginalized state, on the fringes of society, and I also want to run a college recruiting program someday.”

This year’s Healy fellows are a diverse group of scholars in multiple fields including theology, linguistics, government and philosophy.

This wide range of backgrounds among Healy fellows helps to cultivate a space for community learning, according to Stewart, a new fellow studying chemistry.

“There is an extra comfort in knowing that I have the community of other fellows here on campus that I can reach out to, and connect with and learn about what they’re doing and seeing,” Stewart told The Hoya.

The combination of the community alongside financial support makes the fellowship especially meaningful, according to Gurley, one of this year’s fellows who is studying U.S. history.

“It’s really allowed me to dedicate my time to my work without worrying about the external things. It’s also given me a good solid community,” Gurley said in an interview with The Hoya.

Alexander Sens, dean of the Graduate School of Arts and Sciences, said the diverse backgrounds of fellows, like this year’s class, will help to strengthen academia.

“The fellows’ diversity of background, experience and worldview enriches our community and strengthens our ability to create and transit knowledge. Diversifying the Ph.D. population is also a crucial step to diversifying the corps of professors across academia,” Alexander Sens wrote to The Hoya.

Sens said the university is proud of the diversity of Ph.D. students represented through the Healy fellowship.

“We’re proud that Patrick Healy Graduate Fellows display a wide range of backgrounds and experiences every year. We believe that having diverse Ph.D. populations, in terms of both background and experience, is of crucial benefit and importance to our teaching, scholarly and service missions,” Sens wrote.

“We hope to continue to build an increasingly strong community of Healy Fellows and to provide our entire graduate community with a robust support system both during and after their years at Georgetown,” Sens wrote.

Chochos said he hopes he won’t be the last formerly incarcerated fellow.

“At the same time, it makes me think of all the people that if they had maybe had the opportunities, could have done more than I could. I hope that while I’m the first, I won’t be the last.”