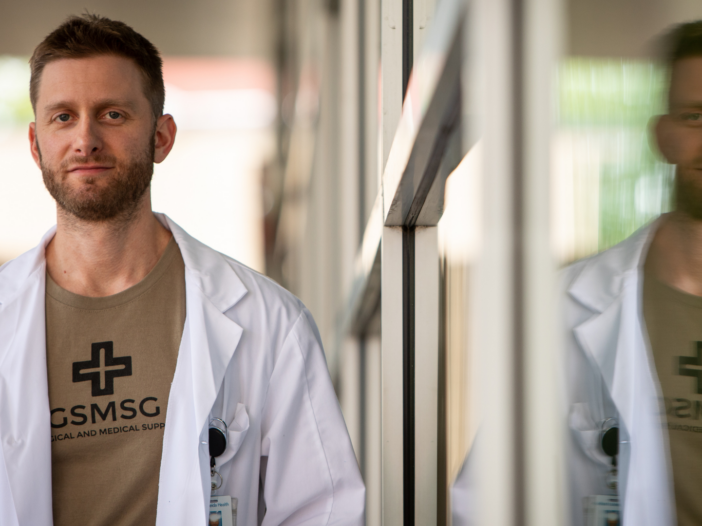 A Georgetown University graduate received the 2022 Citizens Honors Award for Service by the Congressional Medal of Honor Society for providing medical relief and training in global conflict zones.

Aaron Epstein (SFS ’12, MED ’18) received the prestigious award from the Congressional Medal of Honor Society, which was chartered by Congress in 1958. The medal is the highest military award for valor in the United States. Each year, the society presents awards to five citizens and one organization. Award categories include youth service, young heroes and single acts of heroism. Epstein received the citizen service award.

Epstein will be presented with the award during a ceremony on July 20, 2022.

The Citizens Honors Award recognises Americans who have dedicated their lives to serving others, according to John Falkenbury, executive vice president of the Medal of Honor Society.

“The Congressional Medal of Honor Society instituted the Citizen Honors Awards 15 years ago as a tangible way to express the view of its members — the living Medal of Honor recipients — that the principles of service and sacrifice are relevant to all Americans and not limited to those who wear a uniform,” Falkenbury wrote to the Hoya.

Epstein completed a masters in security studies at Georgetown’s School of Foreign Service (SFS) in 2012 and graduated from the Georgetown University School of Medicine (GUMC) in 2018. At the GUMC, Epstein founded the Global Surgical and Medical Support Group (GSMSG), an organization dedicated to providing medical support in war-torn regions.

Epstein credited his SFS education for helping him understand the world from a political and security standpoint.

“It allowed me to create a medical network and use the real political understanding I had obtained to navigate conflict zones in a more effective way than more idealistic aid organizations,” Epstein said in an interview with The Hoya.

SFS Dean Joel Hellman said Epstein has used his education from the SFS and GUMC to improve the world.

“It is so interesting how Aaron combined a medical and security studies education — he brought those two things together and thought about how he can apply his skills in conflict zones,” Hellman said in an interview with The Hoya. “Not a lot of doctors understand working in volatile zones. SFS encourages people to cross boundaries that you don’t see elsewhere.”

The GSMSG trains civilians and soldiers on emergency medical response in danger zones, according to Epstein.

As part of GSMSG, Epstein said that he previously provided medical care to people injured by ISIS fighters in Iraq and is now training civilians in Ukraine to deliver first aid to those injured in war.

“We train our partners rather than dumping supplies and leaving,” Epstein said. “Our approach from the get go has always been to do training. We aimed to broadly train the population in combat casualty care so that everyone could handle on some level basic battle trauma.”

Epstein said his understanding of politics and the medical network have allowed him to navigate conflict zones in a way unlike other aid organizations.

“There are avenues to do good in this world in an effective manner,” Epstein said. “A lot of people are disheartened by seeing international aid organizations that are not efficient where only a tiny fraction of donations make it to those in need. I want people to know though that there are groups out there that are still trying to do the most good.”

Epstein has not only used his medical education to help others in conflict zones, but also to train his colleagues to do the same, according to Princy Kumar, GUMC senior associate dean of students.

“I think highly of Aaron Epstein as he is one of the most altruistic students I have encountered. He also wanted to teach others around him and would often take students for a 2-4 week period to a crisis zone so they could experience the role of physicians in conflict situations,” Kumar wrote to The Hoya.

Awards like this help to inspire other SFS students to do extraordinary things, according to Hellman.

“The award makes all of us at Georgetown proud and contributes to the mission of the school — the more students who are recognised for the kinds of exciting contributions they are making to the wellbeing of others, it just brings great honour and inspiration to other students,” Hellman wrote.”