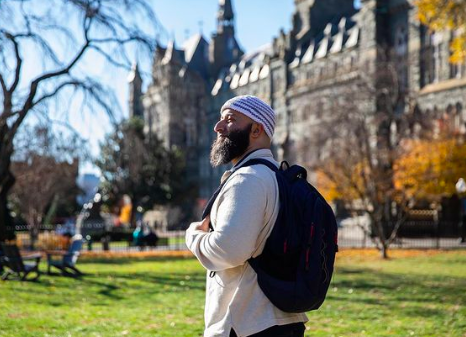 Adnan Syed, who was recently exonerated after spending 23 years in prison for a wrongful murder conviction, will join Georgetown University’s Prisons and Justice Initiative (PJI), an organization that educates and empowers incarcerated students and returning citizens.

In his new position as program associate, Syed will support PJI programming and assist with Georgetown’s “Making an Exoneree” class, which focuses on providing justice to wrongly convicted individuals in prisons across the country. Syed, who has always maintained his innocence, was convicted of killing his classmate and former girlfriend Hae Min Lee in 1999  when he was 17 years old. On Sept. 19, Syed was released from prison after new evidence proved his innocence.

While incarcerated, Syed was a student in Georgetown’s Bachelor of Liberal Arts (BLA) program, a degree focused on cultural humanities, interdisciplinary social science and global intellectual history. PJI expanded its Prison Scholars Program to increase access to higher education opportunities to incarcerated people in Washington, D.C., and Maryland in March 2021.

Syed said he is grateful for the university’s support and looks forward to giving back to the Georgetown community, according to a Dec. 21 press release from PJI.

“To go from prison to being a Georgetown student and then to actually be on campus on a pathway to work for Georgetown at the Prisons and Justice Initiative, it’s a full circle moment,” Syed said in the press release. “PJI changed my life. It changed my family’s life. Hopefully I can have the same kind of impact on others.”

Syed was the focal point of the popular podcast “Serial,” which investigated Syed’s journey in the criminal justice system. Its episodes raised questions regarding the fairness of the trial and the competence of his original defense team, such as its failure to contact a witness capable of confirming Syed’s alibi the night of the murder.

His release comes after prosecutors received new test results from Lee’s shoes, which were not examined in 1999, that revealed DNA from four individuals, none of whom were Syed. In light of the new evidence proving his innocence, Baltimore prosecutors dropped all criminal charges against Syed Oct. 11.

While Syed was a student in the BLA program, his leadership, talent and commitment impressed the PJI team, PJI founding director Marc Howard said.

“It seemed like a natural fit for him to join us at PJI, where he will be able to have a direct impact on other people who are currently or formerly incarcerated,” Howard wrote to The Hoya. “We look forward to having his insight and perspective as our programs grow and evolve.”

As a program associate, Howard said Syed will assist with prison education, professional development for returning citizens and advocacy for wrongfully convicted people.

“Adnan has already become a key member of the team and has been eager to learn the ropes and pitch in on a variety of projects,” Howard wrote. “He’s also extremely generous: He even brought in pastries for the entire team on his first day in the office.”

Joshua Miller, PJI’s director of education, said the BLA program offers individuals the chance to develop their skills, including annotating, thinking critically and navigating technology, in a college classroom setting, an opportunity that is often a first for incarcerated students.

“It has been incredible to see the students dive into their studies and really grow as scholars,” Miller wrote to The Hoya. “Education opens doors not just for incarcerated students but their families as well, and we need a lot more programs like this one.”

Miller, who taught Syed while in prison, said a moment with Syed that stays with him is their conversation about Hayy ibn Yaqzan, a classic text by Islamic philosopher ibn Tufayl about a child who discovers truths about himself and the world as he grows up on a desert island.

“Adnan talked about his own deep faith, and he disagreed with ibn Tufayl’s theology in a bunch of places, but he loved exploring the ideas, and he was really open-minded,” Miller wrote.

Syed said the BLA classes, which are modeled after the interdisciplinary nature of Georgetown’s main campus curriculum, allowed him to escape the confines of incarceration through learning.

“What we learned helped us transcend the walls of the prison,” Syed said in the Dec. 21 press release. “For the first time in 23 years, we didn’t feel like we were in prison. We felt like we were college students learning.”

“We have always felt it was crucial to have as part of the team the leadership and perspectives of colleagues who have been incarcerated themselves and experienced the process of reentering society,” Howard wrote.

Syed said pursuing a college education in prison gave him a sense of purpose and helped him and other incarcerated individuals feel that a better future is possible.