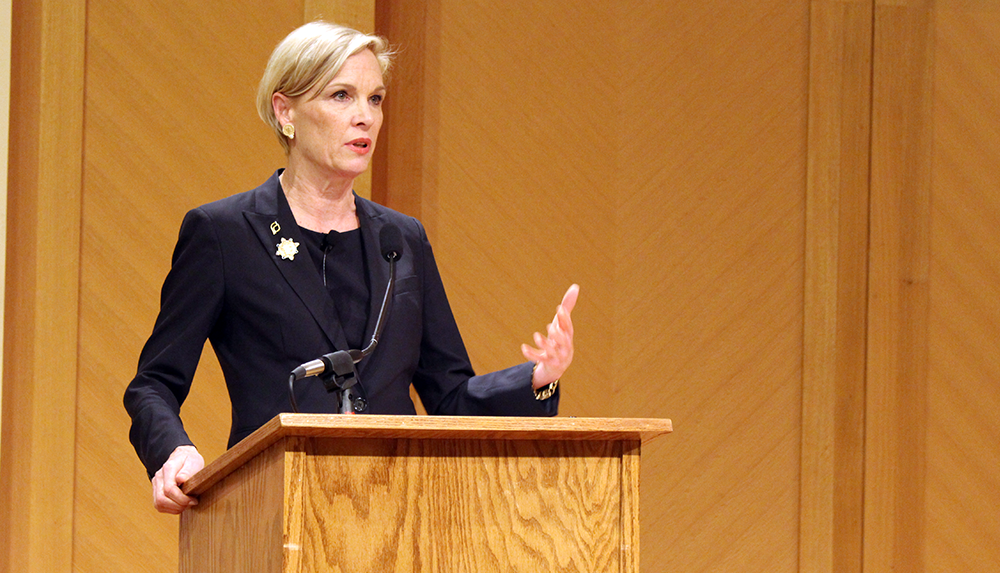 Speaking by invitation of Lecture Fund, which is funded by the university, Richards first spoke directly to the packed room on the history and importance of Planned Parenthood’s services, before engaging in a dialogue with co-planners and moderators Lecture Fund Chair Helen Brosnan (COL ’16) and Finance Chair Elizabeth Rich (COL ’16).

Since its founding in 1916, Planned Parenthood has provided health services, including affordable sexually transmitted diseases testing, birth control, Pap smears, cancer screenings and legal abortion.
Richards’ visit was met with controversy. The day of the event, Georgetown University Right to Life, George Mason’s Students for Life group and a group of young Catholic men belonging to the American Society for the Defense of Tradition, Family and Property protested around campus.

Richards said increased access to birth control in the country has contributed to the advancement of women’s rights.

“In the early 1960s before birth control was legal, women were not expected to build careers  —  much less finish school,” Richards said. “Today, it’s unimaginable that pregnancy would alone determine your future, your career or your education.”

Richards noted the importance of the current administration’s support in advancing the progress on women’s reproductive rights.

“I’ll never forget the day President Obama called Planned Parenthood and told me he was about to announce at the White House that from here on out, women would get all forms of birth control fully covered under their insurance plans   —   at $0 copay, no matter where they work,” Richards said. “It was revolutionary.”

After reflecting on the history and the political journey of the organization, Richards emphasized that women’s healthcare has made significant progress, expedited by technological advancements.

“You can now book appointments 24/7 on a mobile phone — like at midnight when our offices are closed but birth control might just really be on your mind. And just last month we launched Spot On  — a period tracker that is incredibly cool and helps young women track your menstrual cycle and also learn everything about birth control options. And we are even in clinical trials for a self-injectable birth control shot that lasts three months,” Richards said. “There’s just so much opportunity out there — new medicine and new ways to help prevent unintended pregnancy.”

Richards said while significant progress has been made, there are still important obstacles that must be overcome, including Congress’ attempt to defund Planned Parenthood.

“In my home state of Texas, the legislature and Gov. Rick Perry (R-Texas) and Gov. Greg Abbott (R-Texas) have been hell bent on shutting down Planned Parenthood and ending access to safe and legal abortion. They’ve shuttered 82 women’s health centers, most not even Planned Parenthood,” Richards said. “But our folks in Texas will simply not quit. Despite the assault by the governor and the state legislature in the last year, we’ve opened three brand-new health centers in Dallas, Fort Worth and San Antonio, and I could not be prouder.”

Richards also responded to the increased hostility the organization and its clinics faced following the circulation of a video that claimed Planned Parenthood was selling fetal tissue to medical organizations — the footage in video has since been revealed to be heavily edited.

“At Planned Parenthood, our motto is care, no matter what. That’s either a promise or a threat, depending on where you sit,” Richards said. “What it means is providing care even when it’s hard, even when folks are picketing your health centers, threatening your staff or patients  —  because often that’s where women are counting on us more than ever.”

According to Richards, the activism of millennials has been instrumental in fighting back against attempts to stall reproductive justice.

“As we launch our second century, we still have a lot to do, and it’s good we’re here because the single most important group of people to determine our future is you,” Richards said. “I’m constantly blown away by the young people who are taking on topics that sometimes have been taboo for too many years.”

Kory Stuer (COL ’19), a member of the student group H*yas for Choice, attended the event and supported the university’s decision to allow Richard to speak on campus.

“I was incredibly proud of Georgetown for making the commitment to free speech in order to bring in somebody who has an institution they don’t always agree with, but they recognize that this is an important political and social conversation that needs to be happening,” Stuer said.