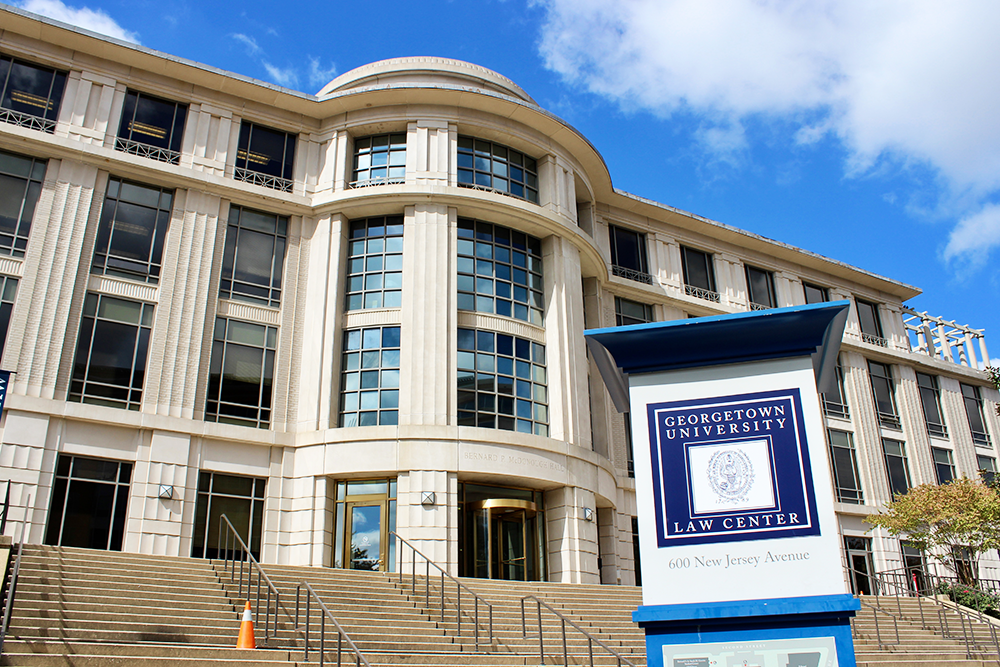 A Georgetown University Law Center institute filed an amicus brief in a lawsuit earlier this month arguing that President Donald Trump violated the First Amendment by blocking constituents on Twitter.

Georgetown Law’s Institute for Constitutional Advocacy and Protection filed an amicus brief Nov. 6 that contends that Trump’s Twitter feed constitutes a public forum. Columbia Law School’s Knight First Amendment Institute, a law institute focused on free speech, filed suit in July on behalf of itself and a group of plaintiffs who were blocked by Trump on Twitter.

“By opening the @realDonaldTrump Twitter feed to the general public, utilizing Twitter’s speech-enhancing features, and engaging in a robust back-and-forth with commenters, defendants have demonstrated their intent to designate the feed as a public forum,” the amicus brief reads. “It is imperative to protect robust democratic dialogue occurring online from this kind of government manipulation and exploitation.”

Amy Marshak, a law associate at ICAP, said the way Trump engages with the public on Twitter makes his feed important.

“He doesn’t just announce policies to the public, so it’s not just that he uses it as platform for what’s called government speech, but also that he engages in a back-and-forth debate with them and that people debate back and forth with each other on this Twitter feed,” Marshak said.

Marshak said if Trump’s Twitter feed serves as a public forum, as ICAP and the Knight First Amendment Institute argue, blocking those critical of him would constitute viewpoint discrimination, a violation of the First Amendment’s protection of free expression.

Organizations do not typically submit amicus briefs in district courts, where the case is currently being argued and judged. However, Marshak said social media as a public forum is a new and important issue that needs to be addressed by elected officials at the local and federal levels, as increasing numbers of state actors are using social media to interact with their constituents.

“We think it’s important that courts get it right and understand that these are how people engage in public dialogue in the 21st century, and so we wanted to make sure the court had that perspective even at the initial decision level,” Marshak said.

Lata Nott, the executive director of the First Amendment Center of the Newseum Institute, said restrictions on speech in a public forum are permissible if they are not based on the content of what is being restricted. However, she said restricting speech on the basis of expressed viewpoints would violate one’s First Amendment rights.

“That’s the case the Knight Center is making. The people they’re representing who were banned, were banned after they made critical statements, and that would be viewpoint discrimination – banning people that criticized you, as opposed to banning people for using obscenities,” Nott said.

Marshak said the president’s behavior could ultimately limit the public conversation to only those who agree with his policies.

“That is really problematic for democratic dialogue, and for the ability to understand how the president is viewed and how his policies are viewed across the political spectrum,” Marshak said.

The amicus brief that ICAP filed also argues that Trump’s behavior on Twitter is reminiscent of authoritarian regimes.

“Part of their playbook is to curate their social media presence, silence dissenting voices, to give the appearance of popular approval, and that is at the heart of what this First Amendment is trying to prevent,” Marshak said.

Regarding the lawsuit’s contention that Trump’s Twitter profile is a public forum, Nott said that public forums are usually public spaces such as parks and street corners, but the government has the ability to turn other spaces into public forums for a time, such as during a town hall at a school.

“There was a recent case at the district court level in Virginia that said that a government official’s Facebook account was a government forum, so I think there’s something there,” Nott said. “I can’t tell you how the case is going to turn out, but I don’t think it’s ridiculous.”

Nott said the way officials use social media would be key in determining whether they are public forums.

“If you had a government official who had a Facebook account where they primarily posted pictures of their grandchildren or wished people a happy Thanksgiving, [it would] probably be harder to argue that’s a public forum,” Nott said. “There’s obviously more of a case when you’re using a social media account in a way to engage the public on policy issues.”