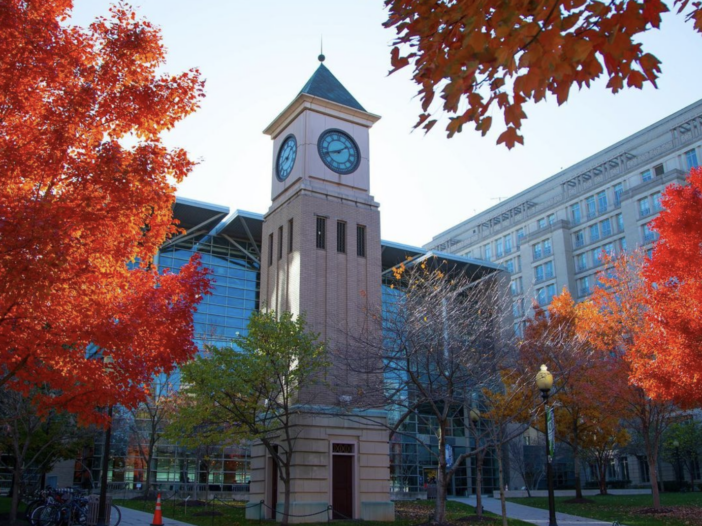 The Georgetown University Law Center was one of six top law schools to report a three-point increase in median test scores for the class of 2024.

The Law Center Class of 2024 brought an “unprecedented” three-point increase to the school’s median Law School Admission Test (LSAT) scores. The school received 14,052 applicants to the Class of 2024, a 41% increase from 2020 and more applications than any U.S. law school in history. The median score for the class of 2024 was 171, an increase from the median score of 168 seen in the past several years, according to Andrew Cornblatt, dean of admissions at Georgetown Law.

Many more schools saw significant and surprising increases in their scores during the past cycle, according to Mike Spivey, a former Law School Admission Council (LSAC) faculty member and senior administrator at the law schools of Vanderbilt University, the University of Colorado and University of Washington in St. Louis, who independently compiled data about the median LSAT scores reported by 197 U.S. law schools.

Law schools across the U.S. experienced a similar point jump; Cornell University, another top 20 law school, also saw a three-point increase in its median score. Lewis & Clark College in Portland, Ore., reported the largest growth of any U.S. law school of four points, from 158 to 162.

Virtual communication during the COVID-19 pandemic allowed the Georgetown Law admissions team to geographically diversify their recruitment efforts, leading to more personal interactions between prospective students and admissions officers and more applicants from across the country, according to Cornblatt.

“We were able to be even more selective than usual,” Cornblatt wrote in an email to The Hoya. “Zoom made it possible for us to expand our interviews geographically which enabled us to expand our personal, one at a time process of deciding who to admit and our outreach to admitted students. As a result, we were thrilled that many more of our admits decided to join us at Georgetown.”

The Class of 2024 brought other notable statistical changes to the Law Center. The median GPA for the class of 2024 increased from 3.78 to 3.85, according to Cornblatt. In addition to the increased LSAT median score, the Georgetown Law admissions rate fell from 21% for the 2020 entering class to just 12.9%. The class is also the most racially diverse in the school’s history, with 40% of students identifying as people of color.

The LSAT’s transition to an online format could have been a possible contributing factor toward higher scores across the country, according to Spivey.

“LSAC had to move the LSAT online; they had to take a five section test and make it a three section test at home versus in a scary, crowded room of anxious people,” Spivey said. “The test questions were no more or less difficult but the test itself was less difficult in the sense that it was less of an anxiety-inducing environment.”

The rise in score and applications shows that Georgetown Law is increasingly popular, according to Cornblatt.

“No matter the numbers for last year, we remain committed to an admissions process that looks at all aspects of an applicant, not just numbers,” Cornblatt wrote. “As for the future, I’ve learned over the years to go year by year but there is no question that Georgetown Law has never been more popular—we are excited to see what this year will bring.”