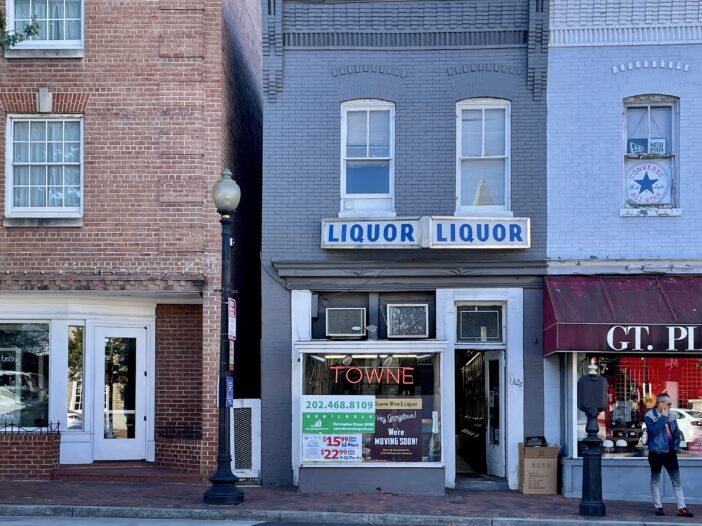 Towne Wine and Liquor has relocated to a new storefront because of its inability to pay the rent at its former location.

The popular liquor store among students and members of the Georgetown University community, affectionately known as “Towne,” moved one block north to 1438 Wisconsin Ave. While Towne began the moving process Oct. 18, the new store location will not open to customers until Nov. 4.

According to Joey Chen, owner of Towne Wine and Liquor, the rent in the new lease for the former storefront was too high, so relocation was necessary in order to stay in business.

“The landlord wanted to increase the rent, and at that time, because of COVID, school was closed, everybody was at home and we were closed for three months, and my rent was almost ending,” Chen said in a phone interview with The Hoya. “They wanted to sign a new lease to increase the rent to $10,000, and we can’t afford it, so we just found a new place.”

Alex Chan (MSB ’23), assistant store manager at Towne Wine and Liquor who is responsible for running the store’s social media platforms, announced the upcoming move in an Oct. 20 Instagram post.

The new location will have more space than Towne’s former location, which will allow for more customers and inventory in the store and a more efficient payment system. The changes will help make Towne more accessible, according to Chan.

“There will definitely be a complete upgrade of the cashier system, and we also have a website coming up,” Chan said. “It will be kinda large going into the new spot, and we are looking forward to that.”

Once the new location opens Nov. 4, Towne will also have a 10% off sale in an effort to welcome customers while getting rid of inventory from the former store, according to Chen.

“We might lower the price a little bit, and then we might do more sales on it,” Chen said. “The product is pretty much about the same right now, because we’re just moving the inventory over.”

According to Chan, Towne, which frequently delivers orders to student clubs and Greek life organizations, set up a promo code Oct. 18 for student groups to access the sales first to get rid of inventory before the moving process.

When it was time to officially move inventory and appliances, Towne enlisted the help of Georgetown University students who worked in exchange for neon signs from the former store, according to Chan.

“We wanted big boys, and where can we find big boys?” Chan said in a phone interview with The Hoya. “The Georgetown rugby club’s big forwards come down to help us move the stuff, and then we give them the beer signs in return.”

In addition to the free neon signs, Georgetown students who helped with the move and were over 21 received a discount, according to Chen.

Towne’s new location will represent a new era for the liquor store, according to Chan.

“We just want to make sure people know that it will be a new start for the Towne Liquor Store in a new location,” Chan said.