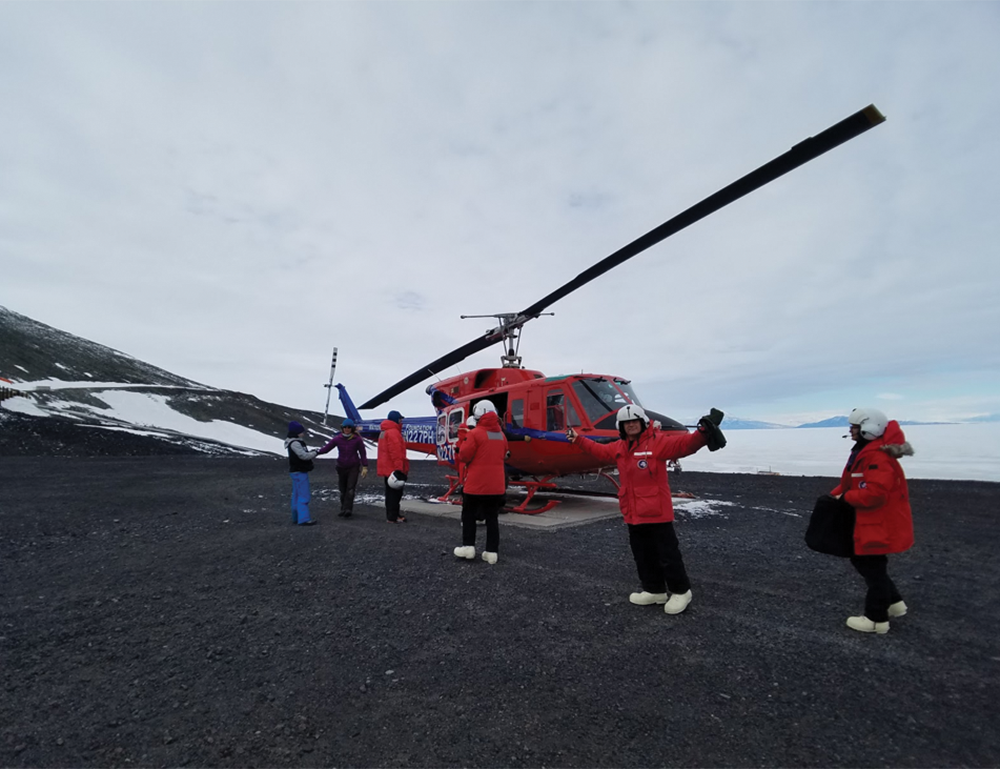 The first research team Georgetown sent to Antarctica returned Dec. 23 from a trip, marking them the first ever research team to bring next generation DNA sequencing technology to the continent.

The purpose of the mission — to look for signs of life in extreme temperatures — helped support their theorizing about long-term cell survival as well as insights into the possibilities of extraterrestrial life.

The team of five was led by principal investigator Sarah Stewart Johnson, an assistant professor of planetary science in Georgetown’s department of biology and science, technology, and international affairs program. The team also included two biologists — Scott Tighe, scientific leader of the Extreme Microbiome Project and research scientist at University of Vermont Cancer Center and undergraduate biology student, Angela Bai (COL ’17). Joining them was Elena Zaikova, a postdoctoral fellow in the Johnson Lab and David Goerlitz, director of operations for the Genomics and Epigenomics Shared Resource at the Lombardi Comprehensive Cancer Center.

Johnson received a grant through the National Science Foundation to travel to Antarctica to conduct the experiments.

“We all worked together: completing the field work, processing the samples back in the lab and setting up the sequencers,” Johnson said. “The sun never sets in Antarctica during the summer, and we worked around the clock. It was intense.”

The team flew by helicopter to and from the McMurdo Station, the main U.S. research base, to the McMurdo Dry Valleys where they tested their theories of long-term cell survival of extremophiles. Extremophiles are organisms that thrive in physically and geochemically extreme conditions.

The lakes and ponds in the valleys are permanently covered in ice, are hypersaline, meaning they contain high levels of salt that surpass ocean levels. The researchers collected “paleomats,” layers of microbial communities that were naturally freeze-dried under the lakes between 2,000 and 50,000 years ago. Since then, the lakes have receded and the mats are buried in the soil.

Goerlitz said that their research is important in gaining information about life outside of Earth.

“The Dry Valleys are extremely cold and hyper-arid polar deserts and are the closest of any terrestrial environment on Earth to the planet Mars, and thus provide an important source of insights into possible extraterrestrial life,” Goerlitz said.

Bai emphasized the importance of this trip for opening opportunities to conduct research in new, unknown places as well as testing for the technology.

“The expedition was pretty important because Antarctica was the final frontier for DNA sequencing, which has now officially been done on all seven continents and in space,” Bai said. “We also demonstrated that sequencing instruments could still work even when they’re not being coddled in an indoors lab, which opens up a whole bunch of opportunities for doing macromolecule analysis in places like Mars.”

Bai, the only undergraduate on the trip, said that although they have not yet conducted extensive data processing or analysis, their preliminary data shows the long genetic sequences they were expecting, thereby proving their methods effective.

“We can use data about the community in its native environment to answer questions about how any living thing could possibly survive in environments different from our own,” Bai said. “Our field season was very successful despite having to rely on chance and luck for digging our holes in the right places.”

Using the Oxford Nanopore Technologies MinION, the data demonstrates the researchers have isolated and sequenced DNA over 68,000 base pairs long from ancient microbial samples around 10,000 years old.

The team is looking toward working on processing and analyzing the data at Georgetown labs once the samples from sites in the Dry Valleys arrive in the coming weeks.

Goerlitz expressed gratitude not only that their trip was scientifically beneficial, but also for the team as a whole.

“We all have our own skill set, and we combined these rather well to complete our mission,” Goerlitz said. “We worked very closely each day in the lab, we flew in the helicopter together, worked in the field together, ate meals together, were roommates in our small dorm rooms, so it was an intense time, but we worked really well together.”