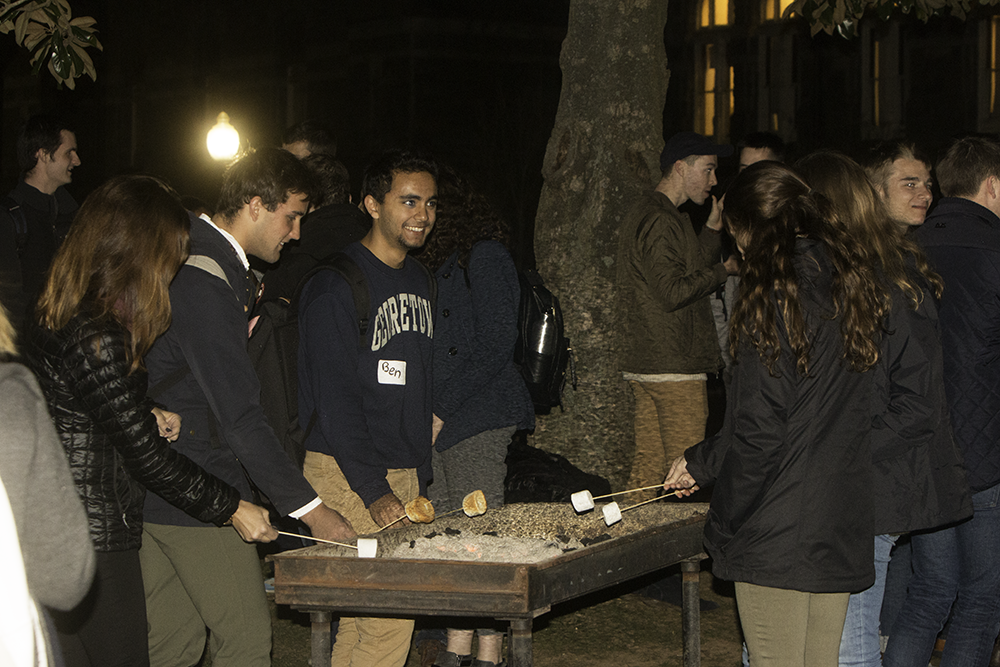 The Georgetown University Midwest Club, which hosted its inaugural social event March 27, providing s’mores to prospective members on Healy Lawn, aims to create a more inclusive club culture on campus by targeting students from the continental United States for its upcoming events.

Two of the club’s co-founders, Henry Gunderson (SFS ’20), a native of Des Moines, Iowa, and Eric Ren (SFS ’20), from Detroit, said they were excited for the future of the club as it works to provide an opportunity to foster a community at Georgetown not currently offered by other clubs on campus.

Currently, the Midwest Club is undergoing the “new club development” process, outlined by the Student Activities Commission, the advisory board that allocates funding to university-recognized student groups. Gunderson said the club’s interest meetings and its recent s’mores event play a role in the club’s status with SAC. All clubs must host a certain number of events per semester, and SAC members base part of next year’s budget allocation on the number of events the club is predicted to host. The club must also illustrate a sufficient amount of student interest for it to receive funding from SAC, according to Ren.

The club awaits SAC’s decision on whether it will become an officially recognized Georgetown student group with allocated funding, according to Gunderson.

Gunderson said the primary reason for the club’s creation is to combat the noninclusive nature of bigger student groups on campus.

“So, it came in two parts. The first part is, we all really enjoy the Midwest,” Gunderson said. “And the other part, and this one sounds a little bit deeper, we were all on the same floor last year, and a lot of us joined different clubs. And there was not a lot of chance to connect, because all the clubs at Georgetown are awesome, like the Corp and GUAFSCU are awesome, but they’re very internal-facing. Once you join, that’s your crew. We wanted to create a club that was very external-facing, and was almost not a club in the sense that it brought people from all of the different spaces at Georgetown together, or gave the option to.”

Future events include a cornhole tournament, a movie showing and a barbeque on Healy Lawn, according to Gunderson. The club also plans to host bonfires and partner with other organizations, like the Georgetown Program Board.

Students who hail from states outside the Midwest are welcome to participate in the club’s events, Gunderson said.

“We want to do very external, community-facing events. That was part of the drive. All of us were on the same floor last year and some of us lost contact with each other because we’re all in different clubs, and in some ways, it’s creating a huge freshman floor, where we can come together and be part of a community and just get to know other people,” Gunderson said.

Ren echoed Gunderson’s views that the Midwest Club strives to be accessible for all students irrespective of their interests.

“Another good thing about having a club that’s external-facing is that there’s really no ‘culture’ with it that comes with the club,” Ren said. “You don’t have to be interested in a certain aspect. For example, if you’re in GUASFCU, you’re interested in finance or helping people manage their savings account. I think the Midwest Club is good for having an open environment, where you can be who you are.”

The co-founders said there would be no club membership dues, citing the importance of removing obstacles for Georgetown students to participate.

“We decided we really didn’t want membership dues because we wanted anybody to be able to come,” Gunderson said. “And to be honest, a fair amount of people that come here from the Midwest are on scholarship, which is really interesting, at least for me.”

Ren added that a lack of membership fees would foster a stronger bond within the club.

“We really believe in high-quality, low-cost community events, and what really helps with that is just having members from different backgrounds able to pool our resources together to host stuff,” Ren said.