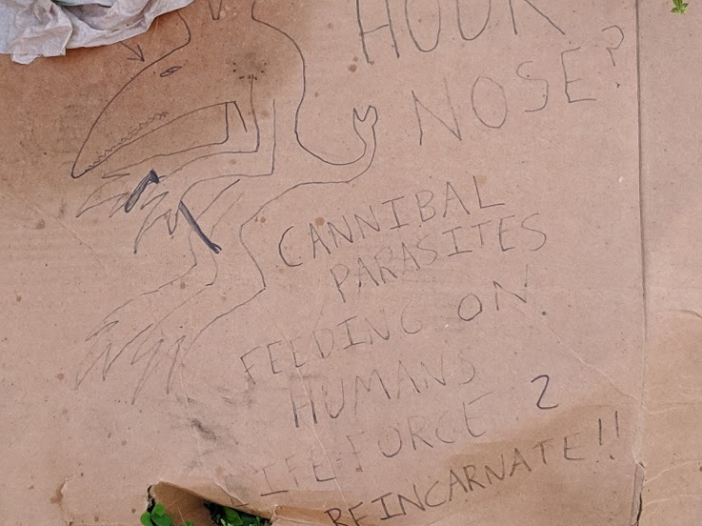 This article directly references content that is potentially upsetting. Please refer to the end of the article for on- and off-campus resources.

Antisemitic flyers and drawings were spotted by Burleith residents as early as late April, nearly a month before a vandal defaced Hardy Middle School property.

Flyers featuring references to popular conspiracy theories had been appearing around the neighborhood every few weeks, some of which featured the Star of David, a symbol of the Jewish religion, according to Burleith resident George Taboada. A few weeks ago, he discovered a piece of cardboard with a crude antisemitic cartoon drawn in the same style as the graffiti at Hardy.

“Nothing was overtly anti-Semitic until one day I saw one that included the Star of David among symbols of Satanism, Free Masons, US govt, etc. That was a few months ago,” Taboada wrote in an email to The Hoya. “I saw fliers on and off until about two weeks ago I came across that cardboard cutout with slurs and the drawing of a rat on it in reference to Jews. That was the worst that I’ve seen since moving into the neighborhood last August.”

Following his discovery of the cardboard, Taboada, a graduate of The George Washington University, reached out to anti-bigotry organizations at Georgetown University and in the greater Washington, D.C. area, including Georgetown’s Jewish Student Association.

The antisemitic content of the flyers and graffiti is especially disturbing because Jewish Georgetown students live in Burleith, according to Lily Rubinstein (COL ’22), co-president of JSA.

“There are still a bunch of Jewish seniors that I know who are living out their leases off-campus in Burleith and thinking about, in the next coming months, students are going to be moving back to D.C.,” Rubinstein said in a Zoom interview with The Hoya. “So I’m worried for them. Even if their physical safety was not at risk, their emotional well-being and mental health in general.”

Considering the proximity of the incidents to campus and the community’s ties to Burleith, a statement from Georgetown’s administration on the bigoted graffiti and flyers would be helpful, according to Rebecca Stekol (SFS ’21), also co-president of the JSA. (Full disclosure: Stekol formerly served as a deputy opinion editor for The Hoya and currently serves as an opinion columnist.)

“I think it’s close enough to home for Georgetown students and Georgetown administrators that it warrants some kind of response,” Stekol said in a Zoom interview with The Hoya. “It is personal because of how close it is and the Georgetown community’s involvement in Burleith and closeness to it.”

A university spokesperson condemned the graffiti in a statement and promised to reach out to the surrounding community.

“Acts of hate, including the anti-Semitic tropes employed in this incident, have no place on our campus or in our community,” the spokesperson wrote in an email to The Hoya. “As a Catholic and Jesuit university, Georgetown is committed to an inclusive campus that welcomes people of all faiths, races, ethnicities, sexual orientations, gender identities, abilities and backgrounds. We will be in contact with community leaders to offer our assistance.”

Resources: On-campus resources include Health Education Services (202-687-8949), Counseling and Psychiatric Services (202-687-6985) and the Center for Multicultural Equity and Access (202-687-4054); additional off-campus resources include The Trevor Project, a national 24-hour, toll-free confidential suicide hotline for LGBTQ youth (866-488-7386), and the Anti-Defamation League, a global anti-hate group against antisemitism and various forms of extremism.