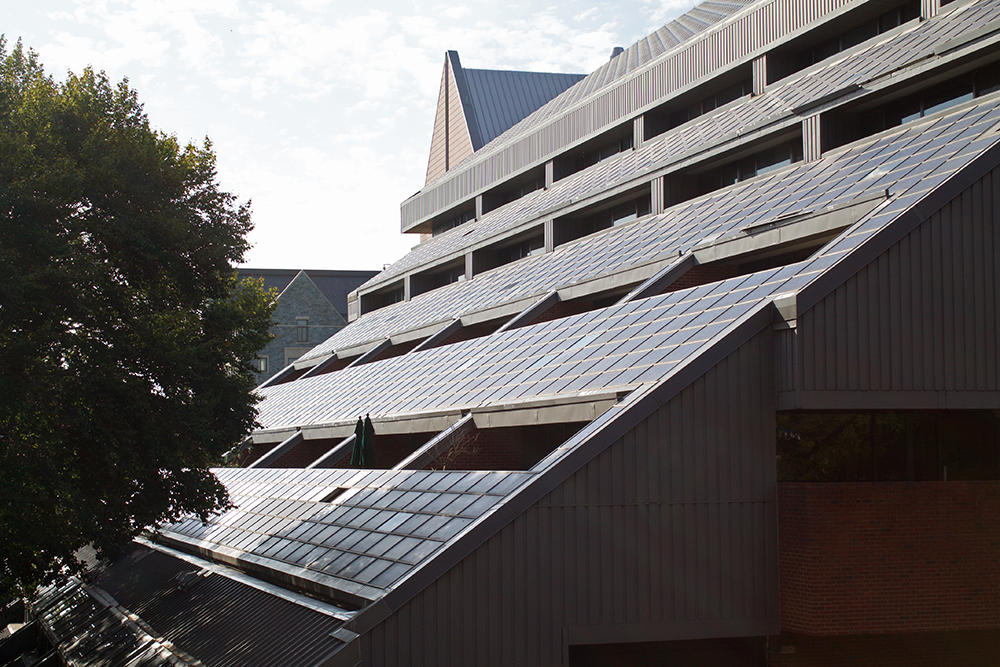 The university’s nomination follows a year filled with “green improvements” spearheaded by the Office of Sustainability.

Each year, the DOEE nominates businesses, individuals and organizations for their efforts in furthering sustainability in the District. The DOEE has been presenting sustainability awards annually since 2009, but the People’s Choice Award was only introduced in 2016. This year marks the first time that Georgetown has received a nomination for a sustainability award from the DOEE.

The award is presented to “outstanding businesses and organizations for their environmental stewardship, innovative best practices, pollution prevention and resource conservation,” according to the DOEE’s website.

The voting process for the award will take place on the DOEE’s website, concluding on March 16.

Audrey Stewart, director of the Office of Sustainability, said that the nomination reflects Georgetown’s efforts to go green.

“We are thrilled to be nominated for this award, which reflects Georgetown’s ongoing commitment to sustainability,” Stewart wrote in an email to The Hoya. “Georgetown plays a leading role in addressing critical sustainability challenges through its academic mission, physical footprint and financial operations.”

The nomination follows multiple green infrastructure projects on Georgetown’s campus. Two of Georgetown’s most recent construction projects, Pedro Arrupe, S.J. Hall and the John R. Thompson Jr. Intercollegiate Athletic Center, have been certified LEED gold, the highest-ranking for sustainability by the Leadership in Energy and Environmental Design rating system. Under the system, projects earn points for environmentally friendly actions taken during the construction and use of a building.

Moreover, since 2006, the university has seen a 24 percent reduction in greenhouse gases per square foot of building space and is on its way to achieving its goal of reducing its greenhouse gas emissions by at least 50 percent by the year 2020, according to Stewart.

Georgetown began its most recent series of improvements with an April 2017 announcement of an on-site solar panel initiative and a Sept. 22, 2017 announcement of a partnership with Origis Energy USA for an off-site project that is expected to provide half of the university’s electricity by 2020.

The on-site solar panels, which are planned to be owned and operated by Community Renewable Energy, are set to contribute to a cleaner electric grid and serve lower-income residents in the city, according to Stewart.

Georgetown’s commitment to sustainability falls in line with its Jesuit values, Stewart said.

“The university takes an integrated and holistic approach to sustainability, placing value on a ‘quadruple’ bottom line: people, planet, prosperity and purpose, guided by our Catholic and Jesuit values and our commitment to the common good,” Stewart wrote in an email to The Hoya.

Besides physical green infrastructure projects, the university has offered events and lectures by experts in the field of environmental science to maintain its commitment to sustainability, Director of the Georgetown Center for the Environment Edward Barrows said.

The nomination for the DOEE People’s Choice Award demonstrates the effort put forth by the Office of Sustainability to make Georgetown more “green,” Barrows said.

Nevertheless, Barrows said he believes the university can still do more to cement its dedication to sustainability. According to Barrows, many of the troubles with being environmentally friendly come from people thinking in the short term rather than the long term.

“People at Georgetown should try to live more in harmony with Earth and think about their actions to be as green as possible,” Barrows said.