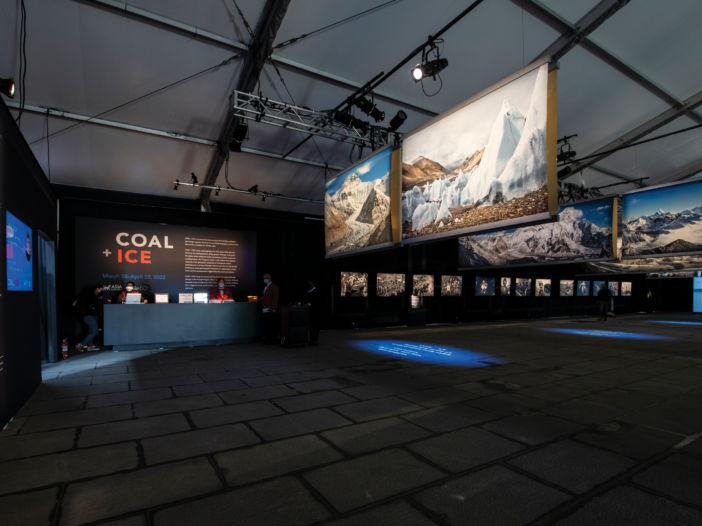 Eight large-scale photographs are set up around the Georgetown neighborhood as an offshoot of the Kennedy Center’s documentary photography exhibition “COAL + ICE,” combining environmental activism, art and technology.

The Georgetown Business Improvement District (BID) worked alongside Dysturb and Magnum Foundation, a photography non-profit that serves as COAL + ICE’s art partners, to construct the photographs around M Street in the Georgetown neighborhood.

The campaign, called #ReframeClimate, features photographs of the impact of climate change alongside interactive prompts and a QR code for the viewer to hear the image’s story from a mobile device.

The #ReframeClimate exhibit will be visible from March 15 to April 22 in conjunction with the Kennedy Center’s “COAL + ICE” exhibit, bringing together the work of photographers and video artists from around the world to visualize the causes and consequences of the climate crisis.

Dysturb and Magnum Foundation have collaborated on the #ReframeClimate exhibition since its conception at the 2015 Paris Climate Change Conference, which featured 25 images adhered to public facing buildings and facades throughout Paris, according to Susan Meiselas of Magnum Foundation and Benjamin Petit, co-founder and chief operating officer of Dysturb.

“In unison with informative facts, we have been leveraging the voices of photographers — the people with eyes constantly on our world,” Meiselas and Petit wrote to The Hoya. “Both Dysturb and Magnum Foundation believe deeply in making photography accessible.”

While the original exhibition in Paris prompted viewers to send a text message and receive a phone call featuring the voice of the image’s photographer, the D.C. iteration of the exhibition shifted to use QR codes, given their increased use during the COVID-19 pandemic.

Since many District residents may be unable to visit the Kennedy Center exhibition, the creators decided to construct the exhibition in the Georgetown neighborhood, where many people gather to shop and study, according to Meiselas and Petit.

“The goal of our collaborative activation remains the same: to challenge the notions of what climate change imagery looks like and spark dialogue amongst passersby through art with an innovative approach,” Meiselas and Petit wrote.

The exhibit aligns with Georgetown BID’s goals of promoting public art and encouraging the exchange of ideas and thoughts, according to Nancy Miyahira, Vice President and Director of Marketing for the Georgetown BID.

“The Georgetown BID strives to make Georgetown a welcoming and inclusive place for visitors, illuminating the neighborhood’s unexpected experiences, places and people,” Miyahira wrote to The Hoya. “Georgetown’s history has always included the exchange of ideas and the promotion of arts and culture.”

Researchers from the Yale School of the Environment helped develop statements and statistics alongside each photograph intended to make passersby stop and reflect on the exhibit, according to Miselas and Petit.

Meiselas and Petit said visual reminders of the impact of the climate crisis are often more powerful than simply reading about it, thus underlining the importance of the #ReframeClimate photographs.

“We all read headlines about climate crisis, but these images can challenge stereotypes and expand conversations,” Meiselas and Petit wrote. “We want to encourage interactions between the people most impacted by environmental injustice with those who are distant, but have the potential to help more.”

Meiselas and Petit hope viewers of the exhibit will be reminded of the impact of climate change on humans, and the power to unite against the dangers it poses.

“With #ReframeClimate, we chose to focus our curation on the climate crisis impact on human communities,” Meiselas and Petit wrote. “We selected images by photographers from around the world which together remind us of how powerful we are together. All of us, along with our ideas, technologies, and cultural expressions, are intending to bring more focus to collective solutions and inspire more engagement with the issues our planet is facing.”