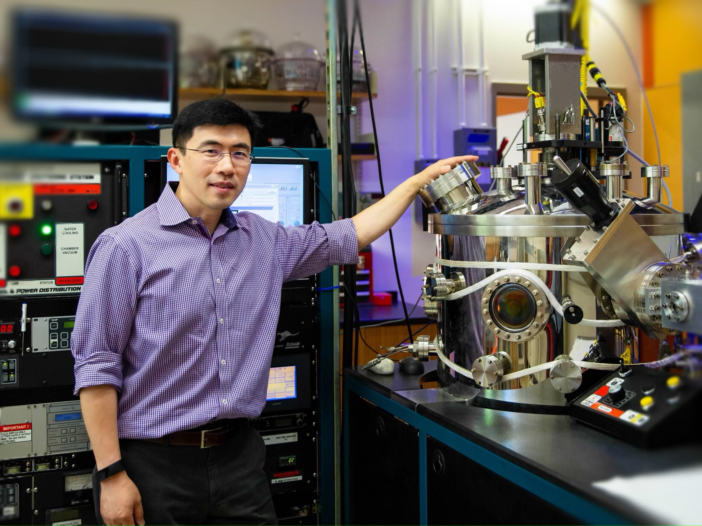 The National Academy of Inventors (NAI) elected a Georgetown physics professor as a member of its 2022 class of Fellows for his achievements in physics research.

Professor Kai Liu, whose research focuses on improving the environmental sustainability of digital storage and magnet production, joined 168 other new Fellows who collectively hold over 5,000 U.S. patents. The honor is one of the highest professional distinctions for academic inventors and connects NAI members with other top researchers in their field of study.

Liu said he is researching how to realign magnetic materials to reduce energy consumption.

“We have demonstrated how to make them twist and turn into certain exotic winding configurations,” Liu wrote to The Hoya. “These findings may someday lead to devices that only use a tiny fraction of the energy compared to the current technology.”

Liu said that his experimentation with various materials, including metallic foams and metal and oxide interfaces, can creatively improve information storage and better the efficiency of hydrogen storage and air filtration systems.

“Our research in this area has led to a number of inventions to introduce topology into nanoscale magnets, which are relevant to the sustainability challenge we face in nanoelectronics – energy consumption in information and communications technology already accounts for over 10 percent of world’s total energy usage today, and continues to rise rapidly,” Liu said.

Amy Liu, the chair of the physics department, said that Kai Liu’s award is fitting for all the academic accomplishments that he has contributed to the field of physics.

“Professor Liu is an outstanding researcher who not only makes important contributions to understanding the fundamental science of materials at the nanoscale, but also thinks creatively about potential applications of these materials, particularly in terms of sustainability,” Amy Liu wrote to The Hoya.

“Through his teaching and research mentoring, he is helping students develop a spirit of innovation in the way they do science,” Amy Liu said.

Over the past two years, Kai Liu has led a group of Georgetown student researchers through their participation in the Mask Innovation Challenge, a materials design competition sponsored by the Biomedical Advanced Research and Development Authority (BARDA) and the National Institute for Occupational Safety and Health (NIOSH) to improve the protection of masks. His team won the first phase of the competition in 2021 and was selected as a finalist for the second phase in June 2022.

Makarand Paranjape, an associate professor in the physics department, said Kai Liu’s focus on real-world impact not only attracts students but also adds to the interdisciplinary nature of his work.

“Kai generates a lot of interest from students to undertake both undergraduate and graduate projects under his mentorship,” Paranjape said. “He also does not hesitate in exploring completely new avenues of research.”

Kai Liu said he plans to continue exploring new mask technologies, most recently through using his expertise in nanomagnetism to improve the reusability of masks.

“One of the projects my group is currently working on is a novel type of nanoporous metallic foams built by nanowires,” Kai Liu said. “The foams are ‘light as a feather,’ yet robust and efficient for capturing ultrasmall particulates – a critical need that we know all too well in the COVID-19 pandemic.”

Liu said he is grateful to be joining his peers in the NAI, and he hopes to use the honor to expand his collaborations with other top scholars in physics.

“It’s a rather humbling experience to be named a NAI Fellow,” Liu said. “I’m most excited that the NAI recognizes our innovations as impactful and relevant to society. Getting this pat on the back is tremendous encouragement that we are doing something right. Our work is really just starting.”

Liu said he is grateful for all the support the Georgetown community has given him in his career leading up to the fellowship.

“The work done together with my students, postdocs and collaborators over the years made this award possible,” Liu said. “To get recognized for doing things we love just brings a grin to everyone’s face.”