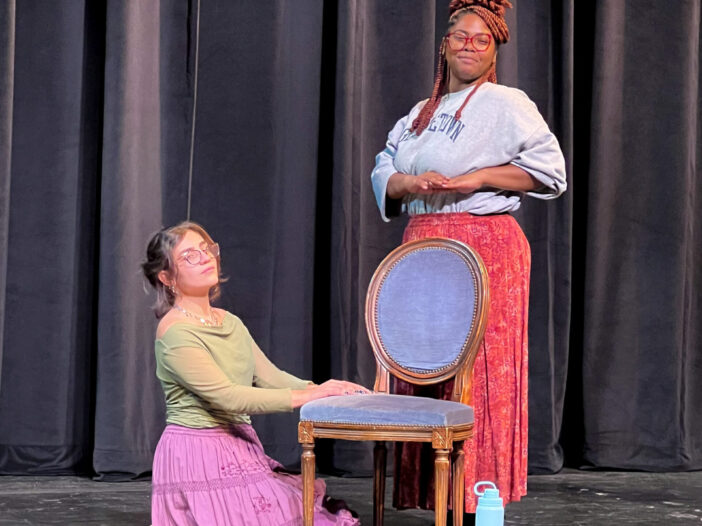 Georgetown University’s Department of Performing Arts is performing Bitter Flower, a play that examines the racism of the white suffrage movement of the 19th and early 20th centuries.

Written by Jennifer Natalya Fink, a professor in the English department and an award-winning novelist and playwright, the play features a conversation between suffragette Jane Addams and Ida B. Wells-Barnett, a Black journalist and civil rights advocate. The play seeks to spotlight the racism of the white suffrage movement and the ways in which Black suffragists were ignored and undervalued, despite their contributions to the cause. The show opened Nov. 16 and will run through Nov. 19.

According to Fink, presenting real historical characters in a fictional setting on stage was an important technique she sought to utilize to highlight the reality of the movement’s history.

“It’s using what’s sometimes called documentary theater techniques –– using real people, historical documents, in imaginative, made-up ways,” Fink said to The Hoya. “I’m fascinated by both of their stories, who they were as individuals and sort of reclaiming them for American history as central figures.”

Fink said the conversation depicted in the play was based on a series of editorials written by Addams and Wells-Barnett surrounding the issues of suffrage, lynching, civil rights and temperance.

“The more I delved into their relationship, the more complex I realized it was and the

the more I realized that there was a story to be told behind their dueling editorials,” Fink said. “I wanted to take these editorials and humanize them –– put these two women in a room together.”

The play seeks to highlight the flawed rhetoric of the white women’s suffrage movement and draws into focus the advocacy of Black women in the suffrage, anti-lynching and civil rights movements, according to Fink.

“They weren’t just operating as individuals: they were able to create and lead enormous social movements of women,” Fink said. “These two women were such powerhouses, such leaders. One was so flawed in her thinking, Jane Addams, and the other, Ida B. Wells-Barnett, was able to, amidst an incredibly racist white suffrage movement, really advocate and critique it.”

LaHannah Giles, who plays Wells-Barnett in Georgetown’s current production, said being involved in Bitter Flower has been a rewarding experience.

“The opportunity to portray Mrs. Wells-Barnett and speak out against the many issues present in the early twentieth century has been a healing experience for me,” Giles wrote to The Hoya.

Giles said that the racial issues examined by the play continue to exist in modern society.

“What I hope audiences will take away from the play is that racism still exists and that lynching not an issue of the past,” Giles wrote. “We must continue to discuss these things.”

Anita Gonzalez, a professor of performing arts and African American studies at Georgetown, serves as the play’s director. Gonzalez said she aimed to blend elements of surreality and reality when sharing the historical context of the story.

“I wanted to be able to deliver the text itself in a coherent way, but also one that helped to create a sense of surreality that would surround the characters in the play,” Gonzalez said to The Hoya.

According to Gonzalez, the play serves as a way for audience members to better understand the full story behind the suffrage movement.

“I hope that audiences learn more about the controversy within the suffragette movement, and how it was racialized,” Gonzalez said. “And then I hope that they will also be able to, you know, enjoy the show and the music itself and appreciate how it comments on the actions itself.”

The play ends with the set being transformed into a tea parlor that audiences can sit in. Actors serve the audience tea while still in costume and character, and audience members can listen to speakers from the crew and from organizations around campus, including the Georgetown Racial Justice Institute.

“The tea is a chance for the audience members to chat with the actors and the production team about the meaning and impact of the play,” Gonzalez said. “It’s a chance for them to explore the issues that are raised in the play more deeply.”

“I think it speaks sort of powerfully and painfully to the current moment,” Fink said. “At this moment, when the ballot box is once again being denied people of color, when women’s reproductive rights are on the chopping block, these same issues really haunt us. The same struggles around embodiment and power and identity play out around suffrage, around voting, in ways that the play directly speaks to.”