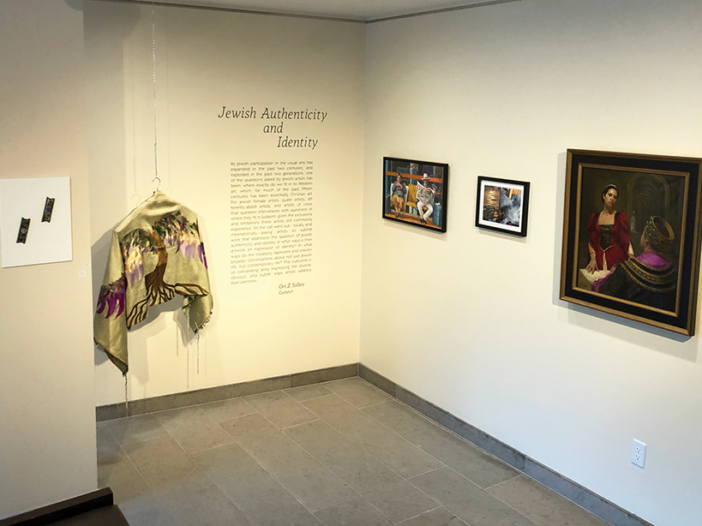 In the pigment print titled “Okuniewicz,” a suit-clad Clark Kent, Superman’s alter ego, sits above a background of speckled matzo bread. Above Kent’s raised eyebrow and blue-toned hair is typography telling the story of a Jewish immigrant changing his last name to Kent. For artist Gail Rebhan, the piece calls attention to how American culture has obscured Jewish identity.

The print, along with nearly 70 other pieces of artwork from over 40 different artists, is part of an exhibition titled “Jewish Authenticity and Identity.” The exhibition, curated by Georgetown University professor Ori Soltes, is being presented both virtually and in person at the Adas Israel Congregation, the largest conservative synagogue in Washington, D.C., and explores the concept of identity within Jewish culture.

For Soltes, pieces such as “Okuniewicz” highlight the exhibition’s broader goal to examine Jewish culture and identity in the world.

“The backdrop is Passover matzo, that quintessential gastronomic element that is associated with remembering who you are, where you came from,” Soltes said in a Zoom interview with The Hoya. “It’s all a play on that idea of identity, and to what extent do I give up or retain my Jewish identity.”

Soltes, who teaches at the Center for Jewish Civilization, an academic program within the School of Foreign Service that aims to promote the study of Judaism as it pertains to foreign policy, religion and culture, began selecting pieces for the exhibition between January and April 2020, with hundreds of artists, nearly half of whom live near the District, submitting their work for consideration.

In addition to creating an environment to hold dialogue on Jewish identity and culture, the exhibition also examines the role of Jewish artists in the world, according to Soltes.

“The given was if you’re submitting work to be considered for this exhibit, you consider yourself Jewish, by whatever way you know. Completely secular, completely orthodox, whatever in between,” Soltes said. “So it doesn’t require for me to define how it’s Jewish, but what it requires of me is that I explore how it’s Jewish.”

The exhibition helped featured artists reflect on their own identity, according to exhibition director Robert Bettman, who originally conceived the exhibit’s concept and later asked Soltes to join as lead curator.

Soltes said he was surprised by the range and variety of submissions to the exhibition, especially regarding the subject matter of submissions, which addressed topics of gender, civil rights and immigration policies. While some pieces included in “Authenticity and Identity” date back to the early 1970s, others are more contemporary, including photographs and collages from 2020.

The exhibit additionally allows viewers to examine the evolution of Jewish art, including both form and style, as well as historical influences, according to the exhibit’s introductory essay, “The Issue of Jewish Art and Identity,” written by Soltes.

With “Authenticity and Identity,” Soltes specifically sought to organize the artwork in terms of both the chronological journey of the Jewish diaspora as well as artists’ interpretation of the diffusion of Jewish identity throughout the world.

“I kind of moved chronologically into the post-biblical diasporic world of Jews, so the history, but then also embedded in that history there were kind of two ideas,” Soltes said. “One, what are the essential sort of values and concepts that have been addressed within the Jewish tradition and, therefore, being addressed by a number of these artists. And secondly, what has been the Jewish experience in the diaspora that, into some degree, is being addressed by these artists.”

While the in-person exhibit will remain installed in the lobby of Adas Israel Congregation through May 14, the virtual presentation can be accessed online at any time. The combination of formats has allowed conversation around the exhibit to flourish, according to Bettman.

“It feels to me like the most important thing that’s occurred is that we, who have been part of this exhibit, have been brought into dialogue with each other in a way that allows us to be our identities in diverse ways, and that feels really successful. That feels really good to me,” Bettman said.

While seeing art in person is often preferable, the exhibition’s online format offered a unique opportunity to curate an intentional and meaningful viewing experience for the audience, according to Soltes.

“The nice thing about the online exhibit is it can follow the conceptual order of the catalog, and so someone can see the exhibit as I ideally would want you to see it,” Soltes said. “If you choose to go from beginning to end, you’re kind of walking along with me in the way I was thinking about it.”