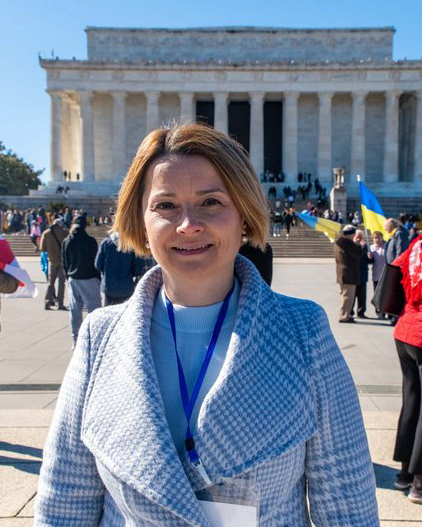 Baydyuk founded United Help Ukraine following Russia’s 2014 invasion of Crimea. After Vladimir Putin launched an invasion of Ukraine on Feb. 24, donations to United Help Ukraine have skyrocketed, according to Baydyuk, who said the organization has raised over $22 million and spent nearly $15 million supplying humanitarian aid and medical supplies to Ukraine.

Baydyuk also said the organization has gained more volunteers both in the United States and Ukraine.

“We grew pretty large — in the past two months, we’ve also increased the number of our volunteers here in the U.S., but also in Poland and Ukraine,” Baydyuk told The Hoya.

Baydyuk was born in Ukraine and lived there with her family until she moved to the United States to finish her undergraduate studies in 1998. Though her mother and sister evacuated their family home after Russia began its invasion, her father remains in Kyiv.

Baydyuk said she continues to hear about the deaths of her friends and loved ones in Ukraine.

“My family home is outside of Kyiv, and part of it was destroyed,” Baydyuk said. “A very good friend of ours who we let stay in our house — a young man who just proposed to his fiancee not long ago — a rocket or grenade hit the house, and he died.”

Russian missile and air strikes have led to a total of 5,264 Ukrainian civilian casualties, according to an April 21 report by U.N. High Commissioner for Human Rights Michelle Bachelet.

Ukrainian students have been grateful to receive support from the Georgetown community, according to Andrii Sendziuk (MSB ’24), a Ukrainian student and organizer for student activism group Stand With Ukraine GU.

“When we are organizing, we are expecting a specific response, and in all cases, we’ve seen the response is better than we expected,” Sendziuk told The Hoya. “Beginning from tabling and rallies, people would come up, people would ask questions. What I also really liked is that people would spark conversation.”

However, Ukrainian Hoyas have found that conversation on the crisis has died down over the past two months, according to Sendziuk.

“With previous wars, and other things that have happened in the past, the trend is, when it’s happening, people pay attention,” Sendziuk said. “People talk about it, but then it usually really dies down within like a month or so. And that’s what we’ve seen with Ukraine.”

To keep the momentum going, Sendziuk said Ukrainian Hoyas are continuing to spread the word about ways non-Ukrainian members of the Georgetown community can get involved.

“Stand With Ukraine GU posts regular updates in terms of rallies, in terms of tabling — stuff like that — and you can always get involved,” Sendziuk said. “Second thing you can very tangibly do is reach out to your representatives. And, most importantly, I would just say stay on top of what’s going on because it’s very easy to get drawn behind.”

Baydyuk spoke at the rally Stand With Ukraine GU put on March 2 and said she appreciates the support she has gotten from students.

“The rally was well organized by some of the Ukrainian students, but also others who wanted to support Ukraine,” Baydyuk said. “Students have been really supportive all this time in understanding the situation.”

Fellow Ukrainian student Inna Cherniak (SFS-Q ’23) said the most important thing non-Ukrainians can do is listen to Ukrainian voices in the conversation about the ongoing crisis.

Beyond the solidarity demonstrated by Americans in the wake of the invasion, Baydyuk said the community can do more.