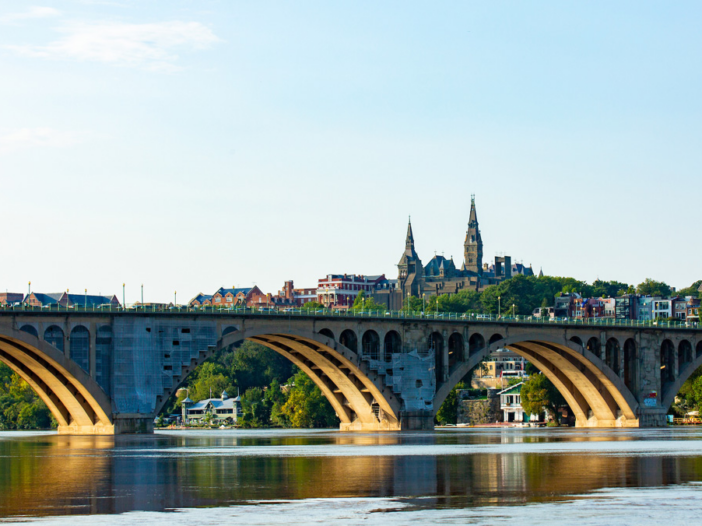 Local transportation advocates have reinvigorated advocacy efforts to create a gondola connecting Georgetown and Rosslyn, Va., after the Council of the District of Columbia took steps Aug. 3 to purchase property in the Georgetown neighborhood.

In its proposed budget for the 2022 fiscal year, the D.C. Council allocated $10 million toward purchasing the property that housed the former Key Bridge Exxon gas station for the purpose of expanding transportation in Georgetown. Though the purchase has not been finalized, local advocates see the budget allocation as the first step toward the possible construction of the gondola.

Under the proposed plan, the Georgetown-Rosslyn Gondola would be an aerial tram over the Potomac River connecting the Georgetown and Rosslyn neighborhoods, with two stations in Georgetown located at 35th and Prospect streets and the Key Bridge Exxon property. If constructed, the gondola is predicted to transport around 6,500 people every day.

The gondola would have many benefits for Georgetown, according to Joe Sternlieb, CEO and president of the Georgetown Business Improvement District, an organization that focuses on improving Georgetown’s commercial district. The gondola would increase access to local businesses and reduce Georgetown’s transit shed, the time it takes on average for commuters to reach the neighborhood as a final destination, according to Sternlieb.

“The economic pro is that it changes the travel shed,” Sternlieb said in a phone interview with The Hoya. “It’s a relatively small area by public transit now, but if you add the gondola it becomes almost twice the size. It really does increase access to the job market in Georgetown. It’s fun and cool and different for this region. I think it would be good on the weekends for attracting shoppers and visitors to Georgetown.”

Transportation advocates have been working to advance the gondola project for several years after a study was released in 2016 by two local architecture and engineering companies stating that the project was a viable option for increasing transportation opportunities and use of public transit in the Georgetown area.

While the primary purpose of the acquisition is to increase access to public transportation in Georgetown, the acquisition also supports the long term goal of building a Metro stop in the neighborhood, according to Sternlieb.

“It’s a strategic acquisition to preserve the city and the region’s ability to bring transit to Georgetown,” Sternlieb said. “There are various different ways to do that, and the most important is a long term plan to bring Metro to Georgetown.”

Georgetown does not currently have a Metro station due to both geographic constraints and concerns over the preservation of historic parts of the neighborhood. The steep grade of the streets hinders underground construction, and the neighborhood lacks an open space for development of a project of this scale.

Regardless of the long term plans for transportation in Georgetown, the gondola still faces an uphill battle. In order to start construction, the project would need to get approval from 27 different agencies in the federal government, Washington, D.C., and Arlington County.

The Arlington County Board has expressed disinterest in the project for several years. In 2017, the board published a letter on its website announcing its opposition to the project, specifically citing concerns about the cost and feasibility of the project.

“Given our identified and pressing transportation needs, along with some ongoing concerns about the long-term value of the gondola, the Board is not in favor of any further funding of the gondola project,” the letter reads.

“I don’t know of a business plan for how this would be to Arlington’s benefit,” de Ferranti said in a phone interview with The Hoya. “It needs to be more than just an idea that there’s a fun and interesting way to cross Key Bridge and instead a viable plan for an economically successful approach from Arlington’s point of view, and I don’t see that at this point.”

Without the Arlington County Board’s approval, the gondola is not likely to be built. Still, transportation advocates and lawmakers have suggested other uses for the soon-to-be acquired Key Bridge Exxon property, including an electric vehicle charging station.

The electric vehicle charging station would help to expand transportation options in Georgetown while also supporting current efforts in the District to expand environmentally sustainable transportation, according to Ward 2 Councilmember Brooke Pinto (LAW ’17).

“The former gas station across from the Francis Scott Key Bridge is located at one of the largest arteries connecting DC to Virginia,” Pinto wrote in an email to The Hoya. “By purchasing this property, DC could establish the city’s first major EV charging station and in so doing take a significant step towards electrifying DC vehicles and provide a place to stop to charge for ride share drivers as they move to electrify their fleets.”

While the gondola’s future remains uncertain, there is still a possibility that the project could happen under the right circumstances, according to de Ferranti.

“I don’t rule anything out forever, but I don’t see a reason to pursue the gondola at this stage until we learn more from the D.C. government,” de Ferranti said.