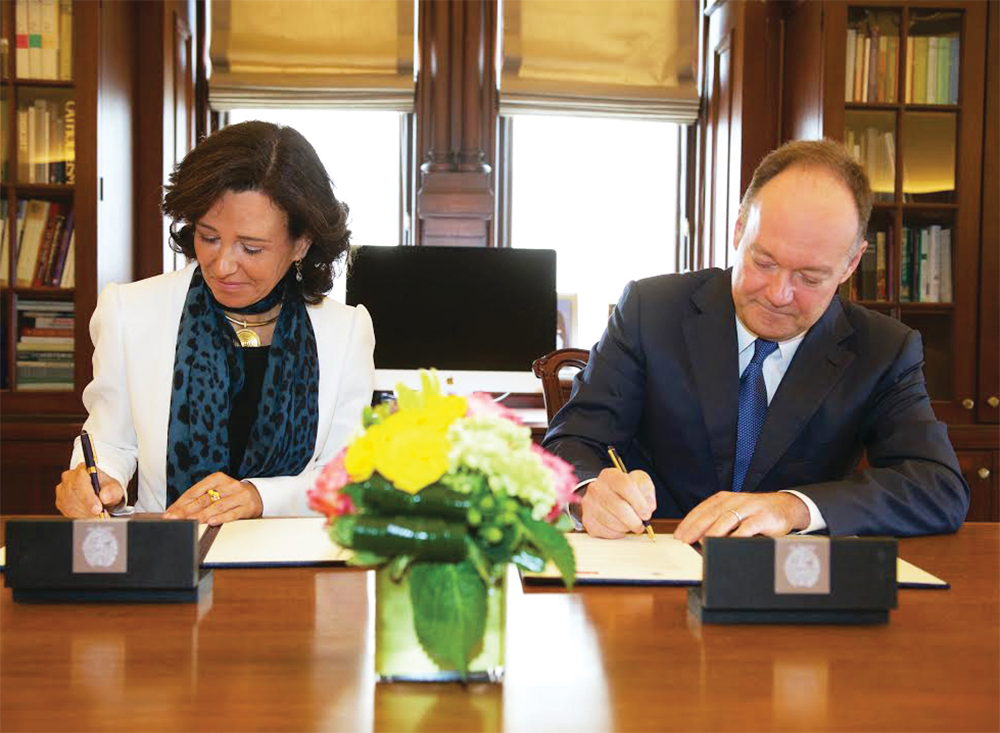 The banking organization Santander Group will support graduate-level research at Georgetown University in the field of social economy as part of a $2 million partnership agreement, according to a Jan. 17 announcement.

Georgetown and Santander aim to train students, scholars and citizens who will be mindful of the need to incorporate social justice into business.

Social economy is an interdisciplinary field that covers a range of concepts including business, law and public policy and deals with the social and environmental responsibility of the private sector.

Dean of the Graduate School of Arts and Sciences and member of the partnership’s steering committee Norberto Grzywacz said both parties have shown commitment to their respective communities in the past in helping the public.

“Georgetown has historically been a university that, in addition to its education and research mission, has had a deep core value on the common good,” Grzywacz said.

Santander U.S. Chief Counsel Michael Lipsitz said the group’s social engagement projects and cooperation with other academic institutions are unrivaled amongst banks and other financial institutions.

“We create opportunities for students, we grant scholarships, we partner with the universities on various initiatives and projects like the one we’re doing with Georgetown,” Lipsitz said. “We actually believe that we are the biggest or among the biggest of financial services institutions that have programs like this.”

According to Lipsitz, universities play an important role in influencing community-oriented endeavors and therefore can produce many potential customers for banks.

“Social inclusion is the responsibility that we have to lead societies to improve — to get better. One of the important dimensions for this society to get better is access to money, access to financial services that is, by no means, trivial for us,” Cole said.

Cole, who participated in the partnership’s inaugural event about social inclusion, also appealed to the importance of institutional commitment in which organizations both are able to effect societal change and profit at the same time.

“Social enterprise is organizations that are committed to creating social, positive change in the world, but focusing on often-earned revenues or even profits,” Cole said. “Social enterprise means doing good and being good but at the same time, making it sustainable.”

Georgetown and Santander plan on hosting a summer workshop for graduate students. According to Georgetown Professor Ricardo Ernst, graduate students will learn the importance of financial inclusion and be able to devise sustainable mechanisms to support communities.

“In July, we have a workshop where the goal there, in addition to academic purposes, will be to have the students think about how to achieve financial inclusion,” Ernst said.

Ernst also said that Georgetown plans to hold two  forums throughout the year in which participants will discuss an array of pertinent social issues, including access to health care.

“We hold three forums a year. The first was held in October, and we had several very good speakers and a second coming up in February,” Ernst said. “The next one will tackle the issue of health care and how health care can be paid for.”

Also crucial to the cooperation is linking Georgetown with other universities through the network Universia, which hosts the online journal “Globalization, Competitiveness, and Governability.” Ernst said this allows for the accumulation and sharing of useful knowledge on social inclusion amongst several academic institutions.

“Santander Bank has been working with Georgetown to link all of the universities in Latin America with many universities in the U.S.,” Ernst said. “Universia is actually the one for the first and only virtual journal that Georgetown has.”

According to Cole, the current generation’s value-driven mindset has the potential to drive the future of social enterprise in new and innovative ways.

“Today’s younger generation is insistent that their employment opportunities, their investment decisions, their consumption decisions, align with their values,” Cole said. “So we’re seeing a potential change.”