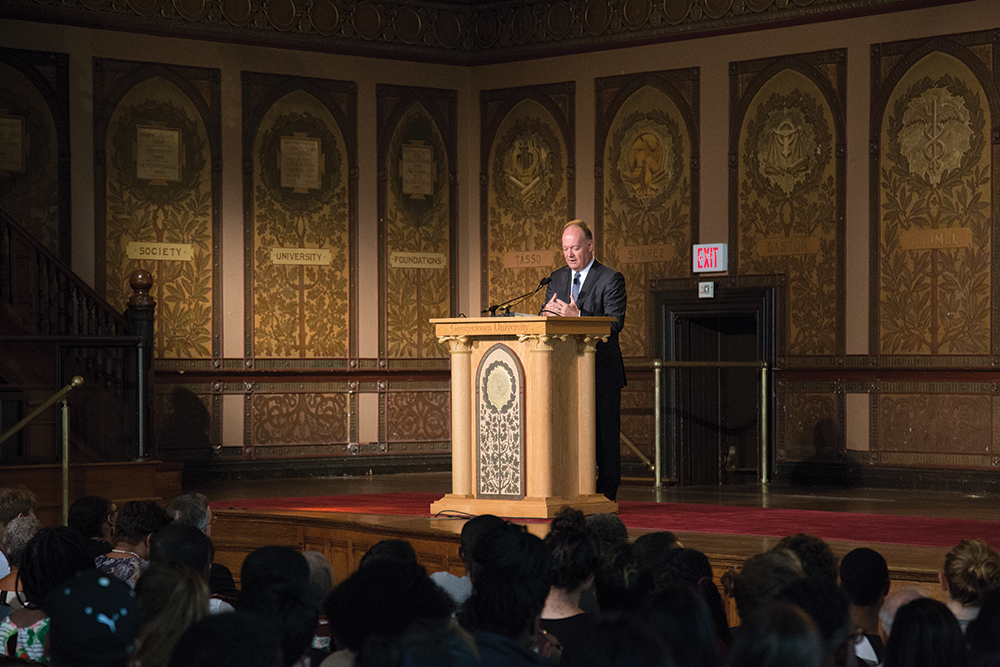 Georgetown will undertake a series of efforts in order to reconcile with its slaveholding past, including providing descendants of the 272 slaves whose sale in 1838 benefitted the university an advantage in admissions applications.

The measures, announced by University President John J. DeGioia at an event in Gaston Hall yesterday afternoon, come after a year of work by the Working Group on Slavery, Memory and Reconciliation charged by DeGioia last September.

DeGioia said the working group’s progress over the past year and the university’s future actions reflect the important role of Georgetown as a university.

“Every so often we are reminded of why we chose a life in the academy. Ours institutionally is a life directed by purpose, a mission. We are committed to the formation of young people, to the inquiry of our faculty and through our institutional agency to contributing to the common good,” DeGioia said. “We recognize that we share responsibility of this place.”

The admissions advantage is one of a series of recommendations included in the working group’s report submitted to DeGioia in June; he announced the approval of a series of recommendations yesterday. In a campuswide email sent Thursday morning, DeGioia said the university would formally apologize for its slaveholding history in a Mass of Reconciliation held with the Archdiocese of Washington and the Society of Jesus in the United States.

The university will also rename Freedom and Remembrance Halls as Isaac Hall – named after the first enslaved person named in records of the 1838 sale – and Anne Marie Becraft Hall – named after a Catholic sister and educator in the Georgetown neighborhood during the 19th century.

Within 24 hours of a student-led demonstration last November, DeGioia approved the working to change the names of then-recently opened Mulledy and McSherry Halls to Freedom and Remembrance Halls, respectively. The halls were previously named after former University Presidents Fr. Thomas Mulledy, S.J., who authorized the sale of the 272 slaves to a Louisiana plantation in 1838, and Fr. William McSherry, S.J., who served as Mulledy’s lawyer in the sale.

As part of efforts to engage the community and raise awareness, the university will establish an Institute for the Study of Slavery and its Legacies to research and teach about slavery and engage with descendants of the 272 slaves.

Other measures announced by DeGioia yesterday include developing formal memorials on campus recognizing the 272 slaves, increased engagement with descendants of the 272 and increasing diversity at the university.

In an interview with The Hoya, DeGioia said the recommendation in the report to increase diversity is a continuation of work the university has already begun.

“We’ve been doing that intentionally for more than 40 years. [The report] reminds us how important it is to sustain this,” DeGioia said.

The recommended timeline for completing these recommendations is unclear, according to history professor Fr. David Collins, S.J., who led the working group. However, a director for the institute has already been appointed.

The working group has been disbanded since the report’s submission.

According to DeGioia, establishing the institute and memorials is part of a larger effort to engage the Georgetown community with its slaveholding past.

“The biggest surprise … when I sent out the letter informing people we were going to establish this Working Group on Slavery, Memory and Reconciliation is that people were surprised,” DeGioia said. “There were folks who did not know that history. And for me, we’ve got to ensure that this history — it’s alive, it’s living here.”

DeGioia said the university’s decision to provide descendants of the slaves sold by Georgetown with an admissions edge, rather than special financial support, is rooted in the university’s existing admission policies. The admissions advantage will operate similarly to admission for legacy students.

The working group also suggested a scholarship eligible for descendants of the 272 slaves in its report.
Patricia Bayonne-Johnson, a descendent of one of the 272 slaves, said she questions whether if the gesture will have the desired effect. Bayonne-Jonson said other universities should follow Georgetown’s lead.

“Some of them, it’s an offer but it’s something they could not or would not take advantage of. I think probably it would serve them better if this edge could be extended to people who want to attend any institution, say Xavier University,” Bayonne-Johnson said.

Adjunct professor Richard America, who is an expert on reparations, said the university’s recognition of the descendants as members of the Georgetown community is welcome, but that the greatest potential lies in the institute.

“That’s a microgesture,” America said. “What we really have an opportunity to do is impact big-level thinking on the whole race problem that affects 350 million people in this country, in one way or another — and by the way, globally, so 7 billion people around the world — because the same concepts apply.”

Collins said Georgetown’s role as a university made the development of an Institute for the Study of Slavery and its Legacies a natural response on how best to engage with troubling parts of the university’s history.

Georgetown will rely on philanthropic support to fund the recommendations — including the new institute — according to DeGioia.

“There are substantial investments that are going to be required here. And I’m very confident that the philanthropic community, that I know very well, will be of support to us as we move forward in this work,” DeGioia said.

“In one sense it’s the one with the smallest price tag but it’s the one that could be potentially the most meaningful and that’s the apology,” Collins said.

Collins said the working group spent substantial time considering what it would mean for the university to make an apology.

“How do you figure out who’s apologizing to whom? How do you ensure that you can’t just spout an apology into the breeze — you want it to be in the context of a relationship — how do you build a relationship?” Collins said.

Symbolic gestures, like the apology, will be just as substantive as more concrete actions, according to DeGioia.

“We want to offer an apology in a manner that is consistent with our Catholic resources available to us in seeking reconciliation, so a symbolic moment, there will be a mass, but it will also be a living moment,” DeGioia said. “So I don’t want to be too locked into symbol and substance. Some of the symbols are deeply substantive, and some of the substance is deeply symbolic.”

In June, DeGioia met with Bayonne-Johnson in Spokane, Wash., in a private meeting, making history as the first reported university president in the United States to meet with a descendant of one of the slaves who worked at or was sold by the university. Since then, DeGioia has met with more than 50 descendants of the 272 slaves — one of the symbolic efforts recommended by the working group. These meetings have played a significant role in his response to the report, according to DeGioia.

“With the dimensions that are particular to the way that universities can engage with this for the first time, I guess I could never have predicted other universities would find our experience helpful, but they have,” Collins said.

Connor Maytnier (COL ’17), who was one of the students in the working group, said he hopes Georgetown’s work sparks similar efforts at other universities.

“Georgetown is really dedicating itself as a force for change in our current world and in our current environment and looking at these modern manifestations of the institution of slavery,” Maytnier said. “I think that you can only hope that this sparks a movement and that you have these other leaders – particularly in education from some of these elite universities – that could latch on to this.”

But for descendants like Bayonne-Johnson, Georgetown’s efforts may have a much more personal impact.

“I was very moved by Dr. DeGioia’s speech,” Bayonne-Johnson said. “It gave me great hope and faith that something will come of it.”

A full copy of the report can be found here.

Correction: This article previously stated Georgetown University sold the 272 slaves to a Louisiana plantation in 1838; Georgetown only benefitted from the sale.