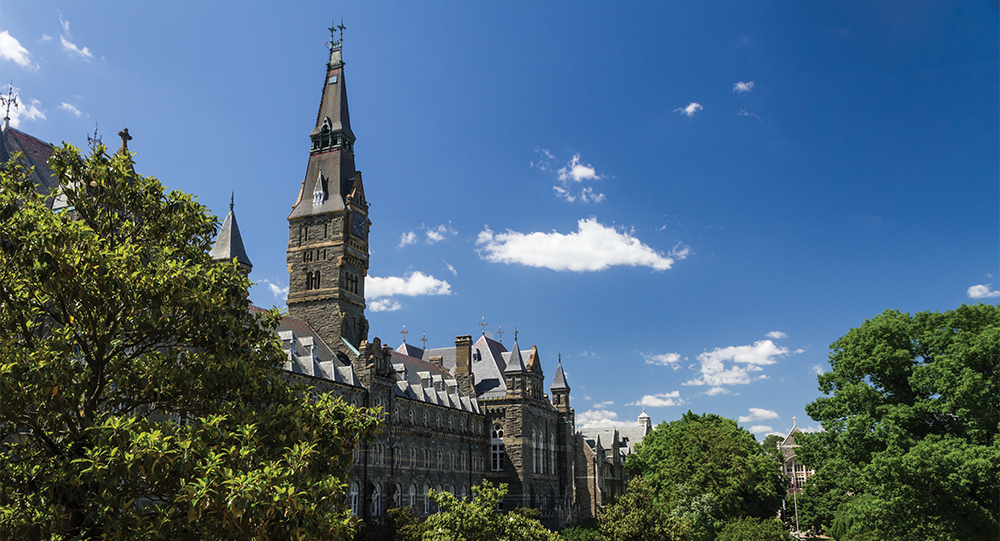 A record-high number of students applied to Georgetown University in this year’s undergraduate application cycle, resulting in a 14.5 percent acceptance rate — the lowest rate in the university’s history.

In total, 22,897 students applied to Georgetown’s Class of 2022, and 3,327 of them were admitted. The applicant pool is the university’s largest ever, breaking the previous record of 21,459 applicants set last year, according to university documents provided by Dean of Undergraduate Admissions Charles Deacon (CAS ’64, GRD ’69).

“It’s the most competitive group ever admitted,” Deacon said.

This year marks the second consecutive record-breaking application pool. Before last year’s cycle, Georgetown’s applicant pool had been relatively steady since at least 2012, according to Deacon.

Georgetown admissions officers believe a surge in youth political engagement since the 2016 presidential election has attracted more students to the university’s location in Washington, D.C., according to Deacon. Deacon said students pursuing a variety of fields, and not just Georgetown’s popular government and politics programs, are increasingly drawn to “being in the presence of things that matter.”

“There is definitely more of a feeling among more young people that they need to get more engaged in their country,” Deacon said. “I do think there is sort of a magnet that makes Washington, D.C., interesting.”

Other top-ranking school have seen soaring applicant numbers as well. Out of the nation’s eight Ivy League schools, seven saw record-low acceptance rates this year, according to an analysis by the University of Pennsylvania’s student newspaper, the Daily Pennsylvanian.

Deacon explained that some of the reasons for recent application pool increases are not Georgetown-specific. Rather, the increase was partly caused by a nationwide rise in SAT test scores. As students’ scores increase, Deacon said, an increasing number of high school graduates see top schools such as Georgetown as being “within their reach.”

But the continuing rise in test scores, according to Deacon, is “largely a factor of the the revised testing system itself.”

The national average SAT score increased dramatically last year after the SAT’s overhaul in 2016, which made the test more curriculum-focused, combined the previously separate reading and writing sections and made the essay section optional. Average scores on the redesigned test were about 20 points higher on the math section and about 40 points higher on the combined reading and writing section compared to previous years.

At Georgetown, the average SAT scores of admitted students this year were the highest ever: 725 on the evidence-based reading and writing section and 742 on math.

Because so many Georgetown applicants had high test scores this year, exceptional scores alone were no guarantee of admission: Of this year’s applicants who scored a perfect 800 on the SAT evidence-based reading and writing section, less than half were admitted.

Students with high scores were still substantially more likely to be admitted than their peers. Yet, rising scores required admissions officers to give greater consideration to students’ talents and achievements outside the classroom — what Georgetown has called its “holistic admissions process.”

“I think because so much of the testing went up, the holistic process actually took greater effect — in the sense that it took more than just good grades and test scores. You also had to back that up with a pretty interesting set of accomplishments,” Deacon said.

Students were admitted from all 50 states as well as the District of Columbia, Puerto Rico, Guam and the U.S. Virgin Islands. The top states for admitted students were California and New York, followed by New Jersey, Maryland and Virginia.

Admitted students also came from 81 foreign countries, though slightly fewer self-identified foreign nationals were accepted this year compared to last year: 255 in 2018 compared to 274 in 2017.

Looking forward, Georgetown plans to stick with the same admissions policies it has had in the past: no Common Application, no early decision and no “score choice” — a policy now adopted by most schools, which allows students to send schools only their best test scores rather than sending scores for every SAT or ACT they took.