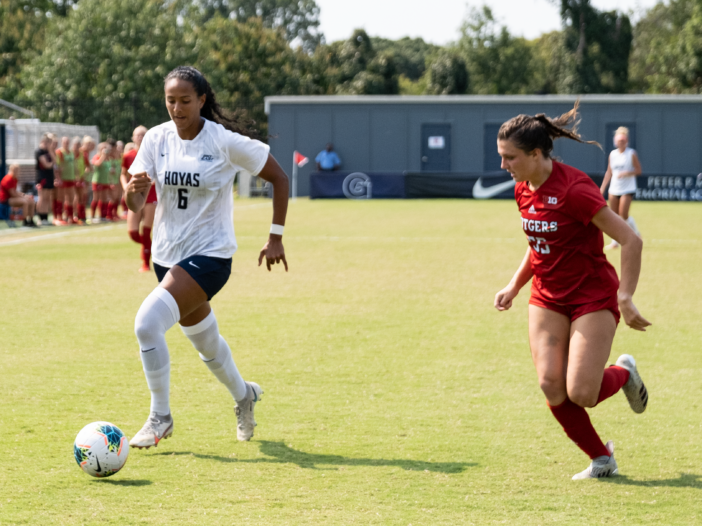 With 90 seconds left on the clock for NJ/NY Gotham FC to make their selection, graduate defender Kelly Ann Livingstone’s hope of being her hometown’s first draft pick was diminished. Then her phone rang. Gotham’s assistant coach delivered the good news, or, as Livingstone described it in an interview with The Hoya, “the best Christmas gift ever.”

Throughout the evening, Georgetown soccer’s success only increased; forward Jenna Menta (SFS ’21) and graduate defender Sydney Cummings were drafted by Racing Louisville FC as the 30th and 42nd overall picks in the third and fourth rounds, respectively.

The draft process is always riddled with uncertainty, but Georgetown women’s soccer Head Coach Dave Nolan said the rescheduling of the draft from January 2022 to December 2021 exacerbated its unpredictability.

“There really was so much up in the air,” Nolan said in an interview with The Hoya. “Normally I feel that when it’s done in January, there’s a lot more time to get organized … it would have given the NWSL coaching and technical staff time to do their research and find what they feel is right.”

Menta, who played for Wake Forest University as a graduate student, described her disbelief about the culmination of her career. “Hearing my name being called and then seeing my picture on my screen and some highlights was just this crazy, surreal experience,” Menta said. “I just couldn’t even believe it, it didn’t feel real.”

Cummings was on FaceTime with her family when she learned the news. “All of a sudden one of my brothers started cheering,” Cummings recounted in an email to The Hoya. “His feed was a few seconds ahead of mine. So at first, I felt confused. But very quickly, I realized why he was reacting, and it was really special to hear my name being called and listen to the analysis about my career.”

Livingstone, Menta and Cummings, however, have a long road ahead of them. Being drafted does not automatically translate to getting signed; all three must impress the coaching staff to win a contract.

Livingstone has played with Gotham’s reserve team before. Cummings and Menta, on the other hand, face the challenge of making an impression on the newly hired Head Coach Kim Björkegren, who, having previously coached in Europe, is not as familiar with the American college prospects.

According to Nolan, impressing their new coaches will be a unique challenge but also an opportunity to start on the same foothold as experienced players.

“If they can impress him in their first couple of days, they may get their opportunities quicker than someone who is going into an older established team with a coaching staff that already has a pattern in their mind,” Nolan explained.

But, these are challenges that their time at Georgetown, which Livingstone described as “the best four-and-a-half years of her life,” has prepared all three athletes for.

“Being at Georgetown is the reason why I am in this position today,” Menta said. “My experience at Georgetown taught me how to take challenges head-on, and that I can be resilient, and that I can come out of difficult situations even stronger. … Just being able to achieve that in one of the most difficult periods the world has ever seen, I think that prepared me to deal with anything.”

Cummings, who spent her first four years of eligibility playing for Brown University, described the growth she experienced during her graduate year at Georgetown.

“The competition, playing style, speed of play, everything was more intense,” Cummings wrote. “Coming into a new program at Georgetown, where everyone is already friends, where they have a different culture, just basically having to step in and compete at one of the top programs in the country was an adjustment. But truly that’s helped me mentally prepare for the unknown territory of the NWSL.”

All three players expressed their gratitude in an interview with The Hoya and attributed much of their success to their teammates and coaching staff at Georgetown.

“My development through Georgetown was just awesome,” Livingstone said. “Because of all the girls and the coaching staff who provide a great atmosphere for people to develop as players and develop as leaders.”

The Hoyas were one of only a few teams to see multiple players drafted. Nolan attributed this success to “the hard work the girls themselves put into trying to get better” as well as the environment he has fostered within the team.

“On the field, we challenge ourselves by playing an extremely difficult schedule every year,” Nolan said. “It matches our girls up against the best players and the best teams in the country. … I also think the culture within the program is such that the kids get something out of every practice.”

Livingstone, Cummings and Menta will join a network of Hoyas playing professional soccer across the globe. According to Nolan, they will serve as an inspiration for younger players with NWSL ambitions.

Carrie McDonald is a sophomore in the College. The Equalizer appears online every other week.