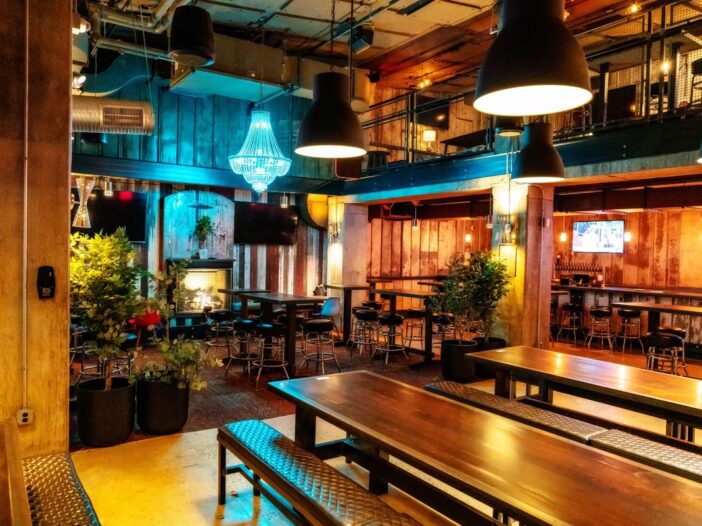 Former Georgetown beer hall and sports bar Church Hall, which closed in February due to violations from the Washington, D.C. Alcoholic Beverage Regulation Administration (ABRA), reopened as a hybrid cafe and bar, Clubhouse.

The restaurant, which opened Aug. 9, will serve a variety of patrons throughout the day. During the day, the Wisconsin Avenue restaurant will be a work-friendly coffee shop with Internet action for patrons of all ages. After 5 p.m., the space will become a restaurant and bar accessible only to those ages 23 and up. The new age requirement follows previous difficulties for Church Hall with fake IDs and serving alcohol to minors.

Clubhouse General Manager Elliot Howe said he hopes that the new business model is a great opportunity for the restaurant to reach out to an even wider audience.

“We wanted to create a space that felt more in-line with the awesome community we’re in,” Howe said in an interview with The Hoya. “Whether you’re a student looking for a place to study and drink coffee, grabbing drinks with coworkers at the end of the day or just want a spot to get pizza with your kids — we’ve got you covered.”

Bar and restaurant development group Tin Shop Group, which operates the space formerly operated as Church Hall, made the decision to shut down the bar following several violations from the ABRA.

According to ABRA Chief of Staff Jared Powell, Church Hall had an extensive investigative history since its opening in 2018. Records show the restaurant had several incidences of failure to file quarterly financial statements and failure to comply with food requirements.

In February, Church Hall faced the same charge and was given another $3,000 fine and five-day suspension, in addition to a mandatory alcohol training program for all employees serving alcohol. Following the penalties, Church Hall management made the decision to shut down the restaurant and explore alternative business models.

Church Hall was known by Georgetown University, George Washington University and American University students as a popular underage gathering spot given its close location to Georgetown and an increased reputation of allowing students to enter with fake IDs.

According to Tin Shop Co-Founder Geoff Dawson, the choice to set the minimum age of the bar at 23 will allow them to maintain a more sustainable business model and decrease the use of fake identifications.

Dawson told DCist that the quality of fake IDs created problems with the ABRA for Church Hall. Once it became a college bar, Dawson found it hard to shake that reputation without a complete revamp.

Clubhouse also expanded its menu in the hopes of attracting a more diverse crowd. Howe said he hopes the menu will provide an upscale environment for sports fans to gather and socialize.

“We want to give the people of Georgetown a different experience when watching sporting events. Gone are the times of greasy food and lite beers,” Howe said in a recent press release by the restaurant. “Our team has worked together to come up with food and drinks that are enjoyable for everyone in the party no matter the time.”

Customers have embraced Clubhouse as another coffee shop for work in the Georgetown neighborhood, according to Jessica Visone, who works at Clubhouse.

“The people who come stop by end up staying pretty much the whole day working there,” Visone wrote to The Hoya. “Customers have loved the vibe and the coffee, which is so nice to see. I don’t stay past coffee shop close, so I can’t speak for the nightlife but I think customers really do like the mix between the bar and coffee shop feel while doing work during the day.”

Visone said the hope is Georgetown students are able to visit Clubhouse and take advantage of the space as a study spot.

“One of the big things was making it more cafe/work-friendly,” Visone wrote. “There’s super cute couches and tables for students to set up at. There’s also a lot more food options for breakfast and lunch while there.”

Clubhouse says that since its opening, the restaurant has received a positive response from customers.

“We are getting great feedback on the food, drink and coffee menu!” Howe said. “The team put in a lot of effort to make sure their experience from morning to night would be top notch.”