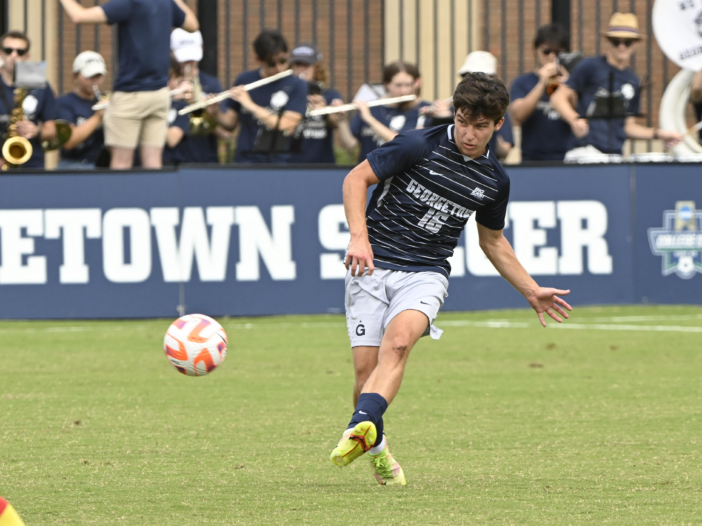 Forty minutes into the game, it looked as if the Hoyas had sealed their victory over the Villanova University Wildcats. Then, a sudden shift in momentum in the 60th minute restored the game to an intense and climactic battle. Fervent Hoya supporters held their breath, anxiously awaiting the final whistle.

In the first 10 minutes of the game, Georgetown and Villanova alternated waves of promising offensive attacks, countered by even better transitions and recoveries on the defensive ends.

In the 14th minute, however, the Hoyas gained the upper edge. In a swift give-and-go sequence, junior midfielder Kyle Linhares found sophomore midfielder Blaine Mabie, who set him up on the upper right corner with a perfectly executed overhead chip. Then, Linhares crossed the ball to first-year forward Jacob Murrell, who flawlessly netted the ball to put the Hoyas ahead 1-0.

Catching momentum, the Hoyas continued to press the Wildcats in their own half, penetrating their defense with precisely placed long balls. On the other end, Villanova responded with a couple of clinical counter attacks while setting up a robust defensive wall against Georgetown’s continuous efforts to extend its lead.

Eager to bolster their lead, the Hoyas finally pierced through the Wildcats’ defense and ended their scoreless 20-minute run. After an exchange between junior forward Marlon Tabora and junior midfielder Trevor Burns, Tabora received the ball in open space in the center of the box. Staying composed, he skillfully slotted the ball into the bottom left of the goal.

Just two minutes later, sophomore defender Kieran Sargeant led a speedy attack on the left side of the pitch, dribbling past two defenders and launching a clinical cross into the box to connect with first-year midfielder Max Viera. As Viera brilliantly finished his chance, the Hoyas entered halftime with a 3-goal cushion and a deceivingly easy sweep.

However, Villanova returned from the locker room with a newfound sense of urgency. The Wildcats’ multiple counterattacks and shots on target seemed to rejuvenate their morale and shift the game’s momentum. No longer dominating Villanova offensively, the Hoyas found themselves outplayed in their own half by the Wildcats’ creative passing sequences.

Villanova’s opportunity to hedge its deficit finally arose in the 70th minute. Following a scuffle for possession in the center of Georgetown’s box, the ball was deflected to the top of the box to forward Balthi Saunders, who calmly took a touch and placed a well-aimed, crisp shot into the lower right corner of the goal.

After approximately 15 minutes of defensive resilience on both sides, the Wildcats cut the Hoyas’ lead to 3-2 with two minutes to go. Following a cross into the box, Saunders hit the ball against the right goal post. Midfielder Brandon Johns received the rebound and slotted the ball past junior goalkeeper Ryan Schewe for a goal.

Though only trailing the Hoyas by one goal, time precluded the Wildcats from completing their comeback, allowing the Hoyas to retain their lead and secure the win.

With the second away victory of the season and 15th consecutive win over Villanova, the Hoyas extended their Big East conference record to 4-1-1. After a rocky start to its season, Georgetown has made an impressive comeback, winning four out of its last five games.

Following the win, Murrell and Tabora were tied with 4 goals this season, while Linhares and Sargeant led the team with 4 assists. The goal-scoring ability of Tabora and Viera, who are both super subs, was instrumental to this victory, attesting to the impressive depth of Georgetown’s bench.

Head Coach Brian Wiese said the depth of the team’s roster is an important part of the Hoyas’ offensive success.

“The Villanova game was a really good example of six players in the squad all getting on the score sheet,” Wiese said. “The shared load of offense production has been really handy.”