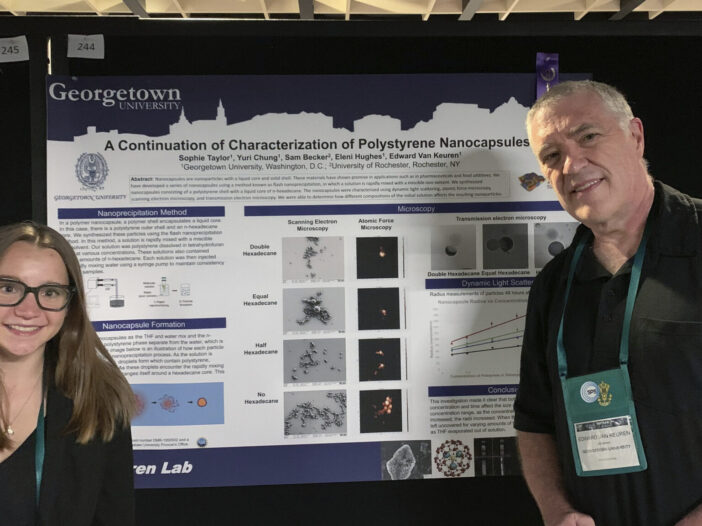 The Society of Physics Students (SPS) recognized Sophie Taylor (COL ’24) on Oct. 8 for her research on nanoparticles.

Taylor, a physics major, won the award at the Physics Congress, which is held every four years by the SPS in different cities throughout the United States. The SPS is a national professional society for students interested in physics, and this year’s meeting took place in Washington, D.C.

Taylor has worked with Georgetown University physics professor Edward Van Keuren’s lab since May 2021 to validate his theory on the formation of nanoparticles. Taylor’s research for Van Keuren focuses on the effects of certain chemicals on the stability, size and durability of nanoparticles.

Taylor said her research aims to improve drug delivery methods, or the ways that medicines reach necessary locations in the body.

“The way I try to explain it is we are trying to make Advil liquid gel capsules, but super small,” Taylor told The Hoya. “Then the hope is that they will break down at a targeted point in the body to deliver medicine to a specific point, rather than having to have a bunch of medicine coursing through your bloodstream.”

Taylor briefly explained the experimental process applied in her research in a Georgetown College press release.

“On the most basic level, we inject a concentrated solution of different polymers, or chemicals, into a rapidly mixing water,” Taylor said in the statement. “Then, the polymers disperse in such small amounts that they form nanoparticles. We are interested in the mechanisms that govern this so we can create recurring, planned results.”

According to Taylor, the particles she and Van Keuren make right now are created with only one specific polymer. The capsules have a solid shell and a liquid core, and eventually, they hope to be able to switch out the interior of the capsule with various pharmaceutical drugs.

Eventually, Taylor hopes that her research will lead to the development of capsules that can more effectively deliver drugs to specific areas of the body.

“Right now, the particles we make are made with one specific polymer, and the end goal would be to change out the components of the particles that we’re making and encapsulate a pharmaceutical drug and then have the outer core of the particle be something that would break down at a specific point in the body,” Taylor said.

Van Keuren said that Taylor’s research could potentially help to broaden the helpful uses of nanocapsules, as well as create nanocapsules that are scalable for mass manufacturing.

“The nanocapsules that Sophie has helped develop could have a number of applications, primarily as food additives or in pharma,” Van Keuran wrote to The Hoya. “For example, drugs for treating various conditions could be loaded into the liquid core and then be released in a controlled fashion once administered.”

In the Georgetown College press release, Van Keuren said Taylor has grown as a researcher throughout her time in his lab.

“Sophie has done an outstanding job with her work, and has really progressed into becoming an accomplished researcher,” Van Keuren said in the statement. “She has also gone from just following my instructions to becoming an integral part of the research, suggesting new experiments we could try or models to help us understand the results.”

Taylor said she also plans to present her research at the annual meeting of the mid-Atlantic congregation of the American Physical Society, which will take place from Dec. 2 to 4.

Taylor said she feels grateful for the award and is excited to continue her research in the field.

“I was super grateful to receive the award,” Taylor said. “It was the first competition that I had entered with my research, and since I had been working on it for about a year and a half now, it was just really cool to have that experience.”