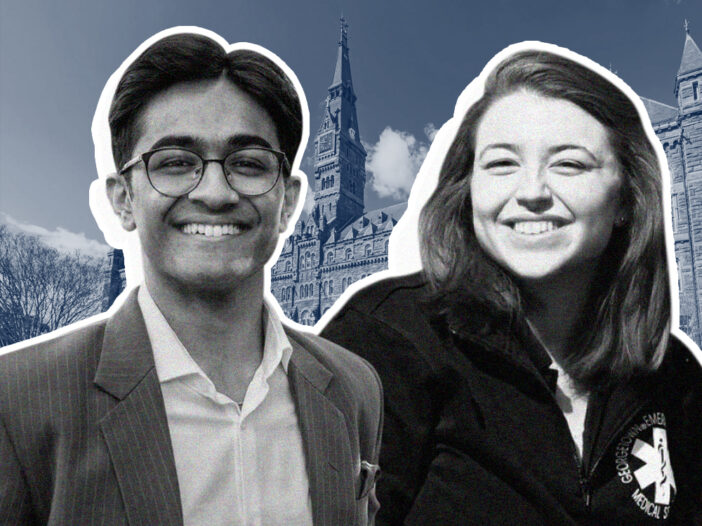 For the first time in over 20 years, two students from Georgetown have been selected for the internationally renowned Rhodes Scholarship.

Atharv Gupta (SFS ’23) and Isabella Turilli (SFS ’22) are joining this year’s cohort of 32 U.S. Rhodes Scholars for their accomplishments transforming emerging markets and global health diplomacy, respectively. The Rhodes Scholarship is the world’s oldest and one of the most selective international scholarship programs that honors students for their outstanding scholarly achievements, character, potential for leadership in their prospective fields and commitment to others and to the common good.

Each year, thousands of prospective Rhodes Scholars submit applications to win two years of postgraduate study at Oxford University in any subject of their choosing. Gupta, a Science, Technology and International Affairs (STIA) major in the School of Foreign Service (SFS), plans to pursue a masters in Social Science of the Internet at Oxford. Turilli graduated with her degree in STIA in May 2022 and will pursue a masters in public policy and public policy research at Oxford.

Gupta said he celebrated with those who helped make the accomplishment possible after receiving the news.

“Saturday night, I got to tell all my friends and we celebrated, but the next day was when news spread really quick. I honestly think it still hasn’t sunk in fully, it’s still only been a few days and my day-to-day life is still the same,” Gupta told The Hoya. “Today I still had to submit — and start — a paper due at midnight; life goes on. Above all though, it’s just surreal.”

Turilli said she looks forward to working collaboratively with her fellow Rhodes scholars.

“Being part of the Rhodes community is a totally unexpected honor. I truly feel as though I am standing on the shoulders of giants, and I cannot wait to learn with and from such a distinguished and accomplished group of scholars, activists and officials,” Turilli said.

The application process started during the Spring 2022 semester, when the applicants had to apply for internal nomination from Georgetown. After receiving their nominations in June, Gupta and Turilli had to secure several letters of recommendation, official transcripts, resumes and essays, on top of preparing for interviews.

Gupta said the application cycle was the most intensive writing and reflection process he has ever experienced.

“I learned so much during this period about how to clearly articulate my beliefs while also telling a story, presenting my personal narrative in a way that interviewers can buy into,” Gupta told The Hoya. “It was transformative, to the point where interview prep even showed up in my dreams.”

Professor Emily Mendenhall, who served as Turilli’s thesis advisor, said Turilli was dedicated to her passions both in and outside the classroom.

“Isabella is both deeply intellectual and scrappy. She is constantly multi-tasking through her scholarship and practical work,” Mendenhall told The Hoya. “For her thesis, Isabella read voraciously and interviewed more than 20 leaders in global health policy, from scholars to practitioners and policymakers, interweaving her reading with the interviews,” Mendenhall said.

Turilli served as a crew chief for Georgetown Emergency Response Medical Service (GERMS) and researched pandemic preparedness at Georgetown’s Center for Global Health Science and Security as an undergraduate. She currently works as a research associate at the Council on Foreign Relations, a top international relations think tank.

With the Rhodes Scholarship, Turilli said she hopes to improve transparency around healthcare policy so the general public can participate in future decision making.

Gupta said his classmates at Georgetown have reinforced his dedication to improving international aid and that he is looking forward to learning more from his peers at Oxford.

“I’m an optimist at heart and a lot of that comes from the excitement and hope of students around me,” Gupta said. “I think it’s easy, especially when studying subjects like international development and relations, to subscribe to a darker view of the future. But my peers have shaped this part of me a lot and I continue to get energy from them even when things seem bleak.”