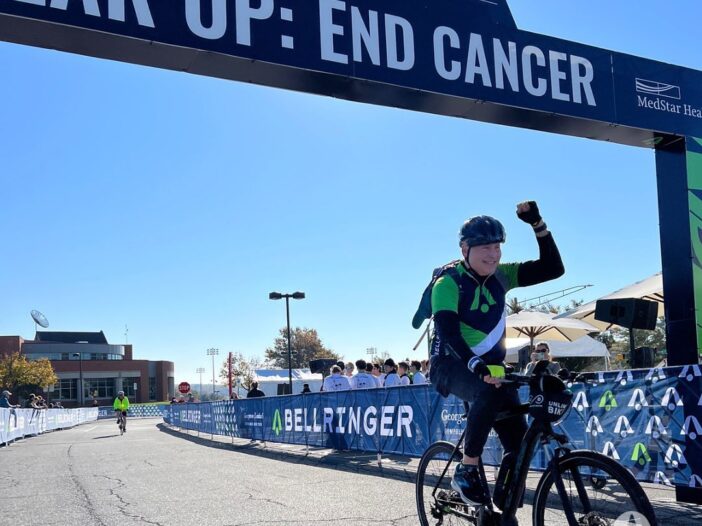 Over 850 riders across 147 teams participated in the Oct. 22 bike race to support research into cancer prevention, diagnosis and therapy at Lombardi, a sector of the Georgetown University Medical Center dedicated to cancer research and treatment. BellRinger was launched in 2020 and intended to host a ride in October 2021, however, the COVID-19 pandemic forced the inaugural event’s postponement until 2022. This year’s participants rode either 25, 50 or 100 miles as a part of their fundraising efforts, starting on Georgetown’s campus and riding to either Germantown or Urbana, Md. By committing to riding one of the three distances, participants were asked to raise $1,000, $1,250 or $1,500 for Lombardi.

According to Chris Timko (SFS ’15), BellRinger executive director, the event was inspired by similar fundraiser events at other universities to raise money for cancer research. Timko said he planned a similar event for cancer research at Ohio State University that now hosts 8,000 riders and raises over $20 million for cancer research, and remains hopeful that BellRinger will increase its impact in the coming years.

“I’m honored and humbled to be a part of it because the impact has the potential to be transformational for Georgetown Lombardi and save lives,” Timko wrote to the Hoya. “This kind of philanthropic funding, every dime of which funds research, will transform Georgetown Lombardi’s capacity to conduct groundbreaking research. It will generate advances that will save lives.”

Timko said student participation was a key factor driving the effort behind the event, and that he was pleased by students’ willingness to help fundraise and volunteer as a part of the weekend’s events.

“BellRinger is about building a community united to end cancer, and there’s simply no way to build a community at Georgetown without students driving the effort,” Timko wrote.

Students participating in the race raised between $500 and $750 depending on how many miles they were biking, and over 125 students rode as a part of over 20 student-based teams, according to Timko.

Estefania Acosta (COL ’23) rode for Team Corp, organized by The Corp, Georgetown’s student-run business, and was one of the few riders who elected to participate in the 100-mile course. According to Louis Weiner, director of the Georgetown Lombardi Comprehensive Cancer Center, 15% of riders committed to raising the necessary funds for the 100-mile ride.

Acosta said she chose to ride the longer distance as a testament to the strength of a family member who fought breast cancer, despite having never completed a ride of over 60 miles prior to BellRinger.

“The ride itself was one of the hardest and simultaneously most rewarding things I have ever done,” Acosta wrote to The Hoya. “To be honest, by mile 70 I was pondering on quitting. However, being surrounded by fellow riders while working up Maryland’s never-ending hills reminded me that this ride was supposed to be challenging both physically and mentally.”

Weiner said he was pleased by the turnout for the race, especially given the number of students who elected to participate.

“This event represented the fulfillment of a dream I have had for years — to bring a signature participatory event to Georgetown that raises money for cancer research, elevates Lombardi’s recognition in our region and strengthens our community,” Weiner wrote to The Hoya. “Mission accomplished — and we are just getting started.”

Georgetown’s chapter of Sigma Phi Epsilon (SigEp), a social fraternity on campus, and the Georgetown University Alumni and Student Federal Credit Union (GUASFCU), Georgetown’s student-run bank, were among the largest teams and fundraisers, according to Timko. SigEp raised over $18,880 with 28 riders, while GUASFCU raised more than $11,400 with 20 riders.

Scott Kase (MSB ’23), who organized SigEp’s team and is in charge of the fraternity’s philanthropy efforts, said the team quickly rallied around raising money for cancer research.

“A lot of people have either been personally and second-handedly affected by cancer with family members and others,” Kase said to The Hoya.“To be able to have an impact on the Lombardi Cancer Center, as opposed to a cause that is a lot further away, was a pretty big driver for us. I think the guys really rallied around that.”

“The sense of community was palpable and helped me envision how this will only grow over the coming years,” Atkins wrote to The Hoya. “I look forward to the day when the ride is filled with Thrivers and their friends and families and we are riding to celebrate the research that has led to many more victories over cancer.”

Atkins said the funds raised from the event will allow Lombardi to recruit new investigators and purchase newer equipment, enabling the center to stay at the cutting edge in the battle against cancer.

Taylor Deasy (MSB ’24), who participated in the ride as a part of the Kappa Kappa Gamma sorority team, said she felt empowered as hundreds of people came together to support a shared mission and goal of supporting cancer research.

“The event was important to me because it symbolized the greater community coming together to support a cause that detrimentally affects the lives of so many people,” Deasy wrote to The Hoya. “I feel like everyone has some sort of personal association with cancer and the bellringer race was meaningful in that it allowed everyone to bike for their personal connection as well as the great community.”

Timko said he is already working to launch next year’s BellRinger event and that the planners will continue to recruit riders, volunteers and donors throughout the upcoming year, hoping to expand the event and raise even more money to fund cancer research.

“BellRinger Weekend is designed to be the culminating celebration of months of effort by our Riders and teams working together to train and fundraise,” Timko wrote. “Relationships are built at BellRinger that are nurtured in the months following the Ride and the cycle repeats itself as we launch for the following year.”