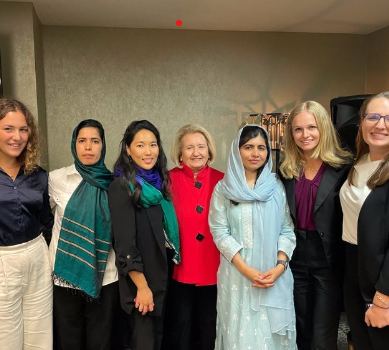 Azizi, who lived in Afghanistan and advocated for the rights of women and girls there for 13 years, said participants at the meeting discussed ways to convince the Taliban to open schools for girls and ways for girls to continue their education in the meantime.

“The international community is trying to find a way out of these problems because no effective action has been taken so far, and it has been a year since schools were closed for girls,” Azizi wrote to The Hoya. “Universities in the United States and other universities around the world can plan and provide online learning platforms and online programs for Afghan girls and help them continue their education.”

Melanne Verveer, executive director of GIWPS and former U.S. Ambassador for Global Women’s Issues, moderated the event and said the meeting was a valuable opportunity for diplomats to engage in discussion with Afghan women who have been directly impacted by the Taliban’s suppression of women’s education.

“It was especially moving to have representatives of the Afghan community — both students and NGO leaders — speak directly and passionately to the officials about the need for great action from their governments,” Verveer wrote to The Hoya.

GIWPS collaborated with the Malala Fund, an organization founded by Yousafzai that supports girls’ education, and the Swedish Mission to the UN, which represents Sweden internationally, to host the meeting. Organizers invited diplomats, leaders in feminist foreign policy and Afghan students to participate in the discussion alongside Yousafzai.

The meeting followed the Chatham House Rule, where attendees are allowed to use information they gather from the meeting to develop foreign policy in their respective countries but cannot attribute comments to specific people or countries, which Karahan said allowed participants to speak more freely about their opinions and capabilities to assist.

“The discussion was not a lot of speeches, but rather one in which very thoughtful concrete commitments and recommendations were made by the government officials on additional steps — from greater diplomatic engagement, particularly in the region, and further UN actions to eliminating the travel waiver for top Taliban to temporary ways to provide access to education through technology,” Verveer wrote.

The discussion highlighted several challenges that Karahan said she had not previously considered when discussing potential solutions in the context of a classroom.

“Here are the people actually carrying out these plans and talking about its feasibility, its probability and the dangers,” Karahan told The Hoya. “That was the most surprising bit, seeing ‘okay, here’s the discourse in my mind.’ I just saw in real life whether or not that’s even possible.”

It is vital for countries committed to feminist foreign policy to pay particular attention to Afghan women, according to Verveer.

“Countries that have officially committed to a feminist foreign policy — that is, fully integrated a gender lens in their foreign policy — it seems have an added obligation in their diplomatic work, to be more engaged on Afghanistan,” Verveer wrote. “It is especially important to speak out and adopt concrete actions to support Afghan women’s rights, which are being assaulted by the Taliban.”

Karahan said Georgetown students have a responsibility to be aware about women’s access to education in Afghanistan.

“You can take classes, you can talk to professors, you can attend events,” Karahan said. “Georgetown is giving you these resources so that when these conversations come up, you not only have a stake in them, but you’re educated, you have ideas and you can propel the conversation forward.”