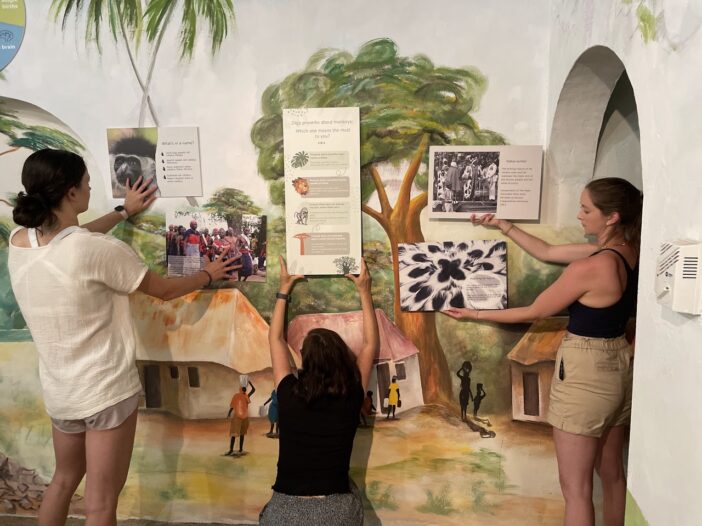 A group of Georgetown undergraduates and professors helped rebuild an educational visitor center in the Diani Beach region of Kenya this summer.

The center was built under the jurisdiction of Colobus Conservation, a not-for-profit organization founded in 1997 to protect vulnerable primate species in East Africa. The center has now expanded to conducting research on human-primate relations, animal welfare, forest protection and eco-tourism awareness.

The natural habitats of species native to Diani Beach have become disrupted as the location has become an increasingly popular vacation spot. Tourism-related development, such as the construction of hotels, threaten the biodiversity of the area, which has lost 75% of its forests over the past 25 years.

The Georgetown team spent the Spring 2022 semester designing a visitors center that raises environmental awareness for tourists in collaboration with the Colobus Conservation. Angela van Doorn, an assistant professor of biology and trip leader, is a long-time friend of the center’s director, Pamela Cunneyworth.

Over the summer, the group went on a two-week trip to Africa to bring their plans to life.

Greg Latronica (COL ’24), a student member of the team, emphasized the importance of communicating with Diani Beach region locals to best understand where their help was needed.

“The relationship that exists between humans and local animal populations is special and delicate. Listening to different people share their perspectives made it clear to me how interdisciplinary environmental issues have become,” Latronica wrote to The Hoya. “This work is super important, but what’s even more important is listening to the stories and perspectives of those affected to reimagine a future where both humanity and nature have the opportunity to thrive.”

The goal of the project was to encourage people to appreciate Diani Beach as more than a vacation spot and promote a mindful treatment of the beach’s ecosystem, John Katial (COL ’25), another student member of the team said.

“We constantly strove to maintain a delicate balance in our conservation messaging, one that conveyed both the precarious situation the Southern coast ecosystem is in as well as the hope and beauty surrounding its resilience,” Katial wrote to The Hoya. “In trying to impact viewers, we wanted them to walk away with a sense that while the situation is serious their actions do make a difference.”

When the team was creating posters and plaques for the visitors center, it was a priority that their work inspired, rather than disheartened, visitors about environmental change, Katial said.
In their mission to inform, trip leader and biology assistant professor Dail Chapman said it was important for visual aids to be clear, engaging and fun.

“The exhibit needed to keep the attention of all ages and it was important that it be interactive,” Chapman wrote to The Hoya. “After a year of prep, two weeks working on site, and lots of incredible experiences in-between, we accomplished what we set out to do.”

Shauna Bennett, an assistant professor of biology who also helped to lead the trip, said the project allowed her to enjoy a new dimension of teaching outside of a classroom.

“Personally, my highlight from the trip was being able to share a brand new, perspective-changing experience with a group of students,” Bennett wrote to The Hoya. “It’s my favorite part of teaching, but wow, does travelling really let you learn together.”

In addition to revitalizing the visitors center, the team assisted Colobus with data collection on human-primate interactions at local hotels and supported staff with the day-to-day tasks of the conservation center,” Latronica said.

The students studied a variety of monkey species at Colobus and learned about the complexities that come with primates living in such close proximity to humans, from human razing of monkey habitats to the negative effects of the presence of monkeys on the local tourism industry, according to Katial.

Latronica said witnessing this relationship was eye-opening, helping him realize the importance of considering all perspectives in issues concerning the future of human interactions with nature.

“There was something awe-inspiring about observing monkey troops in their natural environment, and their intrinsic value is something so clear when you see it first-hand,” Latronica wrote. “Listening to different people share their perspectives made it clear to me how interdisciplinary environmental issues have become.”

Katial said his favorite memory from the trip was exploring the nature of Kenya and seeing how the region could serve as an example of environmental best practices around the world.

“What I found most amazing about it however is that even with relatively few resources, their conservation paradigm is inspirational,” Katial wrote. “The island has banned plastic, uses solar power, and fishes sustainably. They are a model to be emulated.”