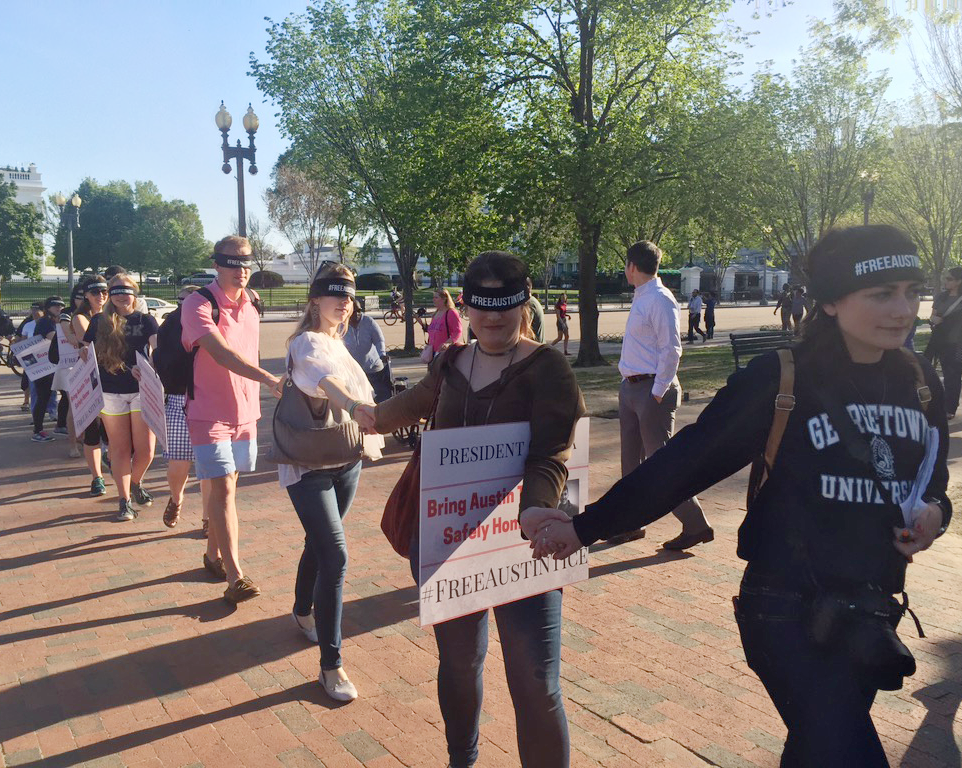 Georgetown students and other activists demonstrated outside the White House on Monday evening in an effort to pressure President Barack Obama to negotiate freedom for journalist Austin Tice (SFS ’02), who disappeared in Syria in 2012.
Tice, a former Georgetown law student and Marine Corps veteran, went missing in Syria on Aug. 12, 2012, while working as a freelance journalist covering the conflict there for McClatchy Newspapers, The Washington Post, CBS and other media outlets. It is believed that Tice is currently being held captive in the Middle East.
Georgetown Law Center students and Reporters Without Borders representatives joined 10 undergraduate protestors who wore black blindfolds with the phrase “#FREEAUSTINTICE” and carried posters reading “President Obama, we are counting on you,” “Finish strong; bring Austin safely home” and “Without journalists, we are all deprived of information, we are all blindfolded.” The protestors asked Obama’s administration to make Tice’s release a priority before the president’s term ends.
The protestors also had a list of 23 additional student supporters who were unable to attend the rally.

The Georgetown undergraduate journalism program organized the Georgetown delegation with the help of director of the journalism program Barbara Feinman Todd and Emily Kaye (COL ’18) after the United Nations began Intra-Syrian peace talks on April 13 at U.N. headquarters in Geneva to resolve the ongoing conflict.
The protest and rally came after an April 6 event titled “Press Freedom Arrested” was hosted on campus as part of the Salim El-Lozi Lecture series during which Tice’s parents, former editors and activists spoke about the importance of ensuring press freedom abroad.

Kaye, who is a member of The Hoya’s editorial board, said the protest is the beginning of a push on campus to raise awareness among students and alumni to continue pressuring the U. S. Department of State to work for Tice’s release.

“This isn’t just the campaign today but really just the beginning of it, trying to galvanize the alumni base and the current student base to show the State Department and to show the White House that we’re really serious about this and we really want this to be a priority,” Kaye said.
Feinman Todd said the issue of press freedom goes beyond ensuring the return of captured journalists.

“After the death of James Foley, they asked Reporters Without Borders to help them to raise awareness about their son, with the idea that maybe Americans didn’t know that there was still an American missing and alive in Syria,” Halgrand said. “So we started a big campaign, Free Austin Tice, with hundreds of U.S. media.”

Halgrand said her organization has assisted in connecting the Tice family to various government and media organizations.

Katherine Leopold (COL ’18), who also attended the rally, said the demonstration served as a powerful symbol of Tice’s experience.

“I think that standing all together with blindfolds on in front of the White House with the signs and not really knowing what was going on around us was kind of powerful because we were letting our bodies be part of the message,” Leopold said.

“Whenever I used to read about journalists in the news or journalists getting kidnapped or when I saw the videos of people getting beheaded by [the Islamic State group], it seemed super far off and distant,” Goldstein said. “When you’re sitting in a journalism class talking about somebody who was in your seat two years before and who is now captured in Syria, it just makes it much more real because you can envision yourself or your peers in a similar situation.”