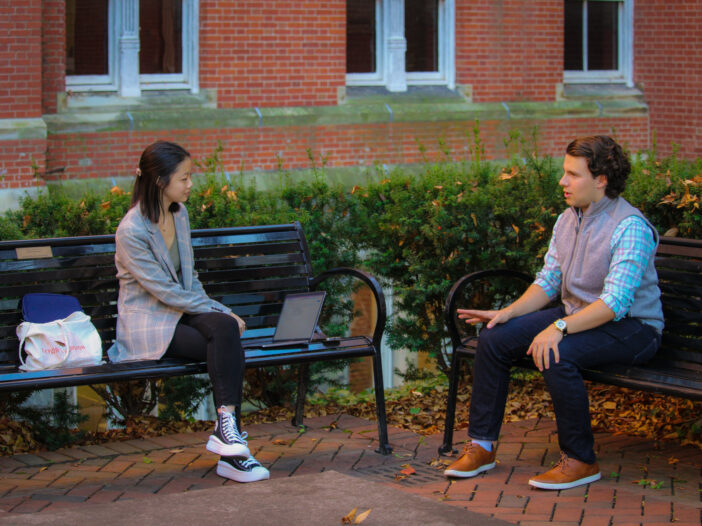 Two Georgetown undergraduate students have been elected to seats on the Advisory Neighborhood Commission (ANC) and will represent Georgetown University’s campus and surrounding areas in decisions on a variety of local issues, according to the ANC’s Nov. 29 announcement of the midterm election results.

The ANC system, which was established in 1973 by the D.C. Home Rule Act, divides Washington, D.C.’s eight wards into 296 single-representative districts and aims to ensure that residents have a voice in District governance. John DiPierri (SFS ’25) and Joe Massaua (SFS ’25) will serve as representatives of ANC 2E, a region with eight districts that makes up the Georgetown, Burleith and Hillandale neighborhoods, starting Jan. 2.

The ANC promotes substantive dialogues and initiatives within local politics, according to DiPierri.

“There’s an old saying that all politics is local,” DiPierri told The Hoya. “Having those individual conversations — talking to people who are concerned about taxes or roads — are very small things in the grand scheme of politics. We talk so much about big issues in the political sphere, but really, it’s having those conversations with people that can make the most impact.”

DiPierri said he ran on a platform of creating cohesion between the campus and its neighbors, collaborating with local businesses and ensuring that Georgetown students are not unfairly fined for parking near campus.

Having run unopposed, DiPierri said candidates win the election as long as they win a majority of the votes cast. In his district, 2E08, there are 40 to 50 active voters out of approximately 2,000 total residents. DiPierri held a write-in campaign in which most of his efforts centered around talking to voters.

Massaua said the Georgetown University Student Association (GUSA) typically chooses and supports candidates for both of Georgetown’s ANC 2E seats. Since GUSA did not endorse Massaua, he said he aimed to build a campaign platform that highlighted his lack of affiliation with the university and advocates for underrepresented student issues like food and housing.

“It felt really internal to me, and I was sort of surprised by the whole process,” Massaua told The Hoya. “I just really wish that the administration and people were more open and transparent with how the whole race is carried out. So, my platform was just being a listening voice to Georgetown students in the community, especially those from difficult socioeconomic backgrounds.”

According to Rohan Patel (COL ’25), who also ran for the 2E04 seat, the Commission provides a valuable opportunity for Georgetown students interested in policy and government to engage with local politics.

Patel, who has previously held congressional internship positions, said serving on the ANC enables commissioners to build and pursue their own agendas.

“I want to do something policy-based, which could be in government, but I’m not quite sure yet,” Patel told The Hoya. “It’s like a good opportunity to get a better understanding of what actually happens in local government and see if that’s something I’m interested in further on.”

Arnav Kumar (SFS ’23), who currently holds the ANC 2E08 commissioner position, said it gave him the opportunity to work on a range of local issues, from water infrastructure to art installations.

“Often you hear people, especially around election time, making a point about how it’s important to vote in the big races — but it’s also important to vote on local races because those often are the policies affecting you on a day-to-day basis,” Kumar told The Hoya. “Localizing things is very important.”

DiPierri said he is looking forward to serving in an organization that seeks to elevate the voices of all D.C. residents.

“We have a district that’s so densely populated with so many different voices, lived experiences and communities involved that the ANC serves a very unique function,” DiPierri said. “We have so many representatives from so many different interest groups and areas, all in one place to have conversations.”