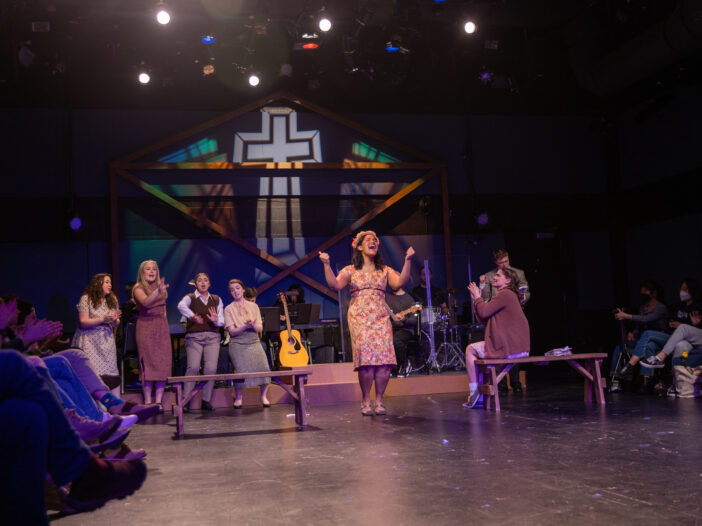 While most Georgetown seniors pursuing theses choose to make their theses 60 to 80-page papers, Margaret Gleason (COL ’22) chose to direct a 1997 musical to culminate her theater and performance studies major.

Her chosen musical, “Violet,” opened March 30 at the Davis Performing Arts Center on campus, and the show is a product of a collaboration between Georgetown University’s theater and performance studies program, the Mask & Bauble Dramatic Society and the university’s music program.

Although a thesis is not required for the theater and performance studies major, Gleason applied to do one in spring 2021. “It was a great opportunity to grow my skill set with direct mentorship from theater professionals,” Gleason wrote to The Hoya.

“Directing a musical has been my plan ever since I learned that you could direct a show as a thesis. Musicals have been part of my life since childhood and directing has been a passion since high school, so merging those two for my senior thesis was exciting to me,” Gleason wrote.

“Violet” is the sixth show Gleason directed and her first full-length musical. Set in 1964, “Violet” tells the story of a young woman, Violet, played by Caitlin Waugh (COL ’24), who departs from her small rural town in North Carolina on a Greyhound bus to Tulsa, Oklahoma. In Tulsa, she seeks to meet the Evangelical preacher she had seen on television in the hopes that he will heal the scar that has disfigured her face after a freak accident during her childhood.

On the bus, Violet meets two young soldiers — Flick, played by Caitlin Frazier (COL ’23), and Monty, played by Sam Kehoe (COL ’23) — who she travels alongside the rest of the show. As Violet struggles to come to terms with her appearance and what it means for her identity, she is haunted by memories of her younger self, played by Thea Belle Flanzer (COL ’24), and her father, played by Nick Giotis (COL ’23).

The Georgetown production exhibited tremendous poise, as each singer perfectly executed their notes, and each actor delivered their lines with the emotion required to bring the scene to life.

“Violet: An American Chamber Musical” is based on “The Ugliest Pilgrim,” a short story by Doris Betts. The musical itself was written by playwright and screenwriter Brian Crawley and its music was written by Tony award-winner Jeanine Tesori. The musical first premiered off-Broadway in 1997, later opening on Broadway in 2014 for a limited run.

“Violet” touches on racism, ableism and prejudice in a way that feels applicable to today, even though the musical takes place 70 years ago.

The show’s somber ending, which includes Monty entering the war and Violet unsuccessful in her mission to be healed, also leaves the audience with many questions that, on the surface, are about Violet but are also about audience members themselves.

Despite the cast’s youth, each actor gave an impressive performance that could have been found on any professional stage. The leads had impeccable chemistry with each cast member they interacted with, changing their inflection and body language with each conversation. The cast also masterfully displayed their emotionally turbulent and vulnerable characters

The live band woven into the set design added to the music’s appeal, featuring a professional guitarist, bassist and drummer. The band proved especially entertaining when they were incorporated into sets, such as the church Violet attends for healing or the nightclub that Violet, Flick and Monty go to in Memphis.

Gleason chose “Violet” because she “wanted to do a show that straddled the line between thought-provoking and heart-warming.”

“I think musicals are sometimes undervalued for how good they are at tackling difficult questions in between or even during catchy tunes and big dance numbers,” Gleason wrote.

Yet, Gleason’s production of “Violet” did not undervalue anything, instead handling the most difficult subjects with the utmost care. Every choice, including lighting, sound effects, and incorporation of the audience seemed perfectly calculated, because it was. From the moment she began the production, Gleason thought about every detail and did not let anything go unnoticed.

The unfortunate timelessness of “Violet” was also important to highlight, according to Gleason. “Racism, ableism, war, and prejudice have not gone away between the show’s 1964 setting and today,” Gleason wrote in her director’s note. Viewers see this racism in the show’s treatment of Flick, one of the Black leads, and how even as a respected soldier, he is disrespected by the government and those around him. Ableism underlies the show’s entire premise: Violet coming to terms with her facial scar that has defined the way others treat her and how she treats herself.

Indeed, “Violet” does not provide conclusive answers to its many conflicts, including how women conform to beauty standards and how people reconcile their past, including the racist history of the United States. But, it is this confusion that adds to the musical’s beauty.

“Let us all leave this theater today ready to hold each other through the frightening times and move forward, hopefully, desperately, inevitably towards the light,” Gleason wrote.